After work, Kim Sunggyu, an office worker, works his mind at “escape rooms” and works his body at climbing gyms. He has some unique hobbies, which he sticks with, and I had clear objectives for my two interviews with him: To show them to office workers who say they have no hobbies other than drinking, and to share them with anyone just looking for something new. To be able to tell them, “Here are some cool things you can do.” Of course, I’m one of these office workers myself.

In this first interview we talk about the escape rooms. You can read the second, about climbing, here. 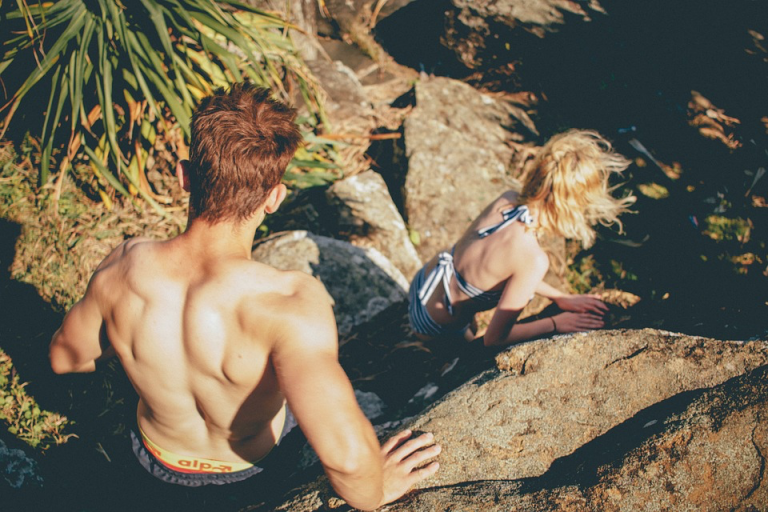 Could you introduce yourself briefly?

I am a reporter in my 30s, who lives alone and cares less than others about what other people think of me. I think I’ve done most of what I’ve wanted to do (laughs). 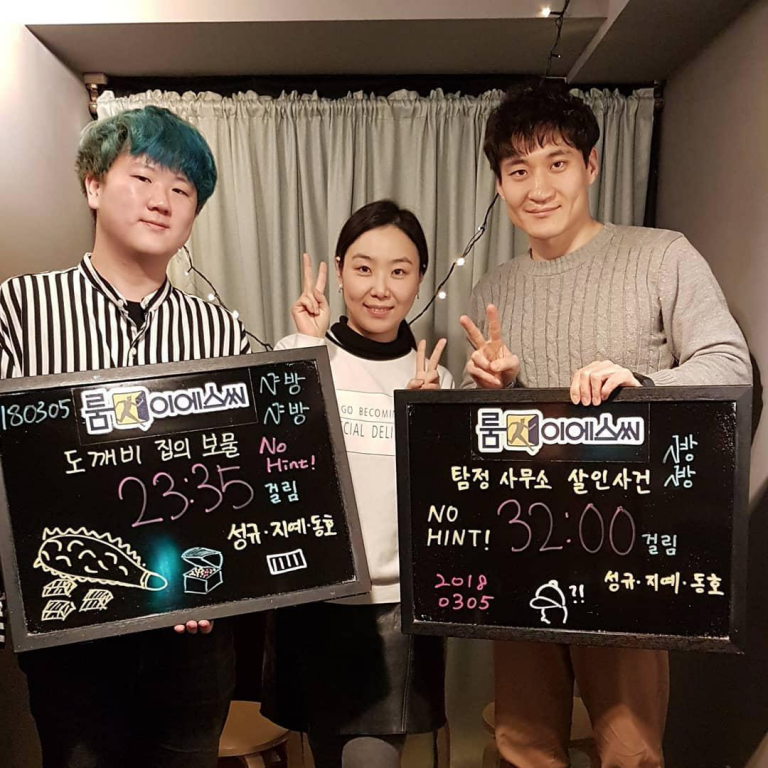 Kim Sunggyu (right) with friends after finishing a room escape.

You have a lot of hobbies. And you work out as well. I heard that you are into escape rooms and indoor climbing these days. When did you start, and how often do you do them every week?

I started both around the same time. Around August last year for indoor climbing and October for escape rooms. I go to the climbing gym in the evenings on weekdays when I’ve no company dinners or prior engagements, and during the day on weekends. So probably about two or three times a week. I go to escape rooms with people from the escape room club. I usually have to be in touch with the company on weekdays, so I tend to go on the weekends. But when I go, we do two or three rooms at a time. At first, I thought, do people really do that? Now, I’ve become that person. So it depends on the week, but I suppose I do about three escape rooms a week on average. 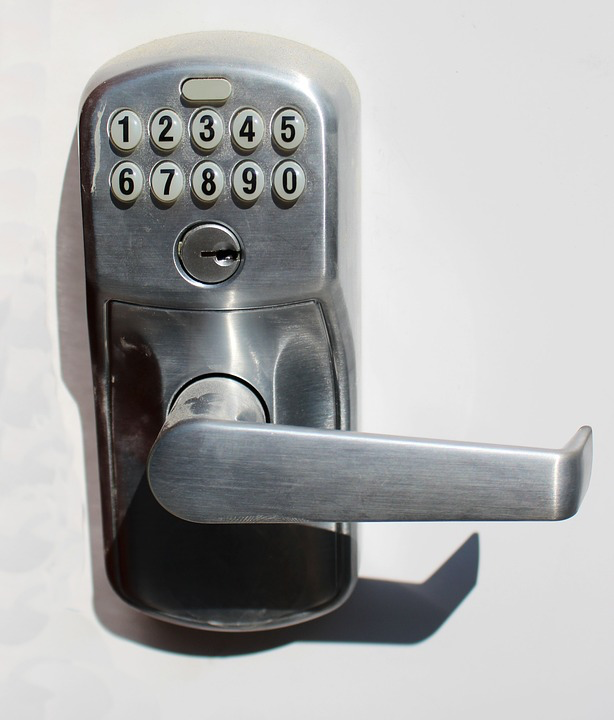 The first time I went to an escape room was because I was reporting on them. When did you first try an escape room? Who did you go with, and do you remember what kind of room it was?

It was sometime in 2016, and I did it with X… It was at ESC in Shillim [in Seoul], and the theme was “Project Z”. The earth was overrun with zombie virus, so we were looking for a vaccine.

Did you successfully escape your first room?

We did, but we were slightly over time. But the person working there let us by and passed us. It was the first time I’d tried, so I was trying to use less hints and ended up spending over 20 minutes on the first question that was really hard. So we finally gave up and used a hint, and then after that it was pretty easy. We were running out of time, so I was really nervous, but the thrill of escaping that room… It’s indescribable. And I’m not a science person at all, but many of the questions were scienc-y. Thankfully, X majored in engineering. I had so much respect for him seeing him solve the questions based on the periodic table which he had memorized. 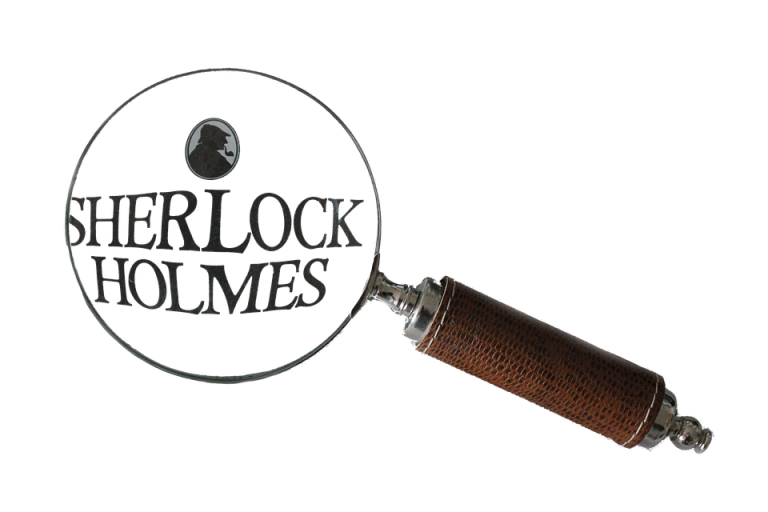 What’s the charm of escape rooms?

I really like detective novels, mysteries, and puzzles. (That doesn’t mean I’m good at them.) I love the TV show Problematic Men. And my favorite mobile game is a puzzle game called Monument Valley. I find pleasure in using my head to look for an answer. The reason Sherlock Holmes is so popular is because people find that kind of thing fun and exciting. 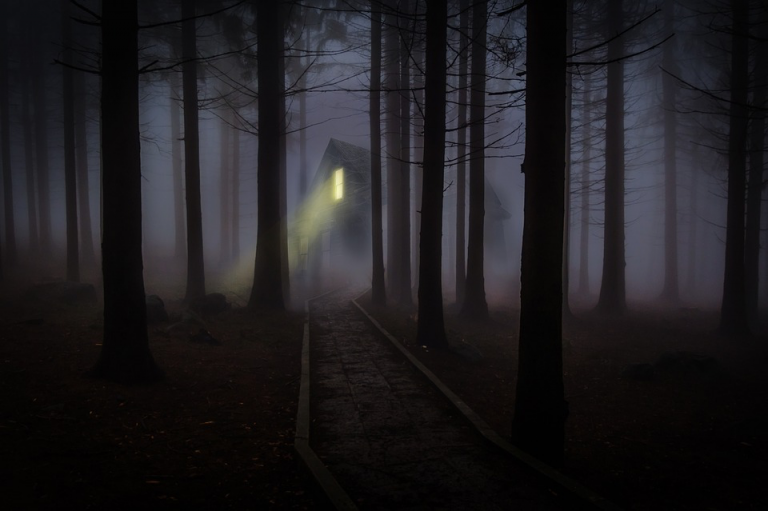 Above all, it’s sort of similar to travelling in that you get away from your daily grind to a place where you wouldn’t normally find yourself and focus solely on what’s there in front of you. Usually when you go in the escape rooms, you have to cover your eyes. You either like escape rooms or you don’t, so some people don’t like it even after they’ve tried it. But everyone gets excited about being blindfolded and going to a completely unfamiliar place. And these days there are various storylines to the escape rooms, as well as cool interiors, designs, and mechanisms. So enjoying those stories or just the space itself would probably be fun as well.

Escape room games aren’t very cheap. How much do you spend one one game, usually?

There are small discounts, but if you’re not going alone, usually about 20,000 won, I think. But some places have escape rooms designed for one person that’s more affordable, and big ones that have 75 minute time limits are a bit more expensive. It’s true that they’re not cheap enough for you to go often. But considering that it is a special experience and that there aren’t that many people like me, who do it a lot, it probably won’t be too much of a financial burden to try it once. 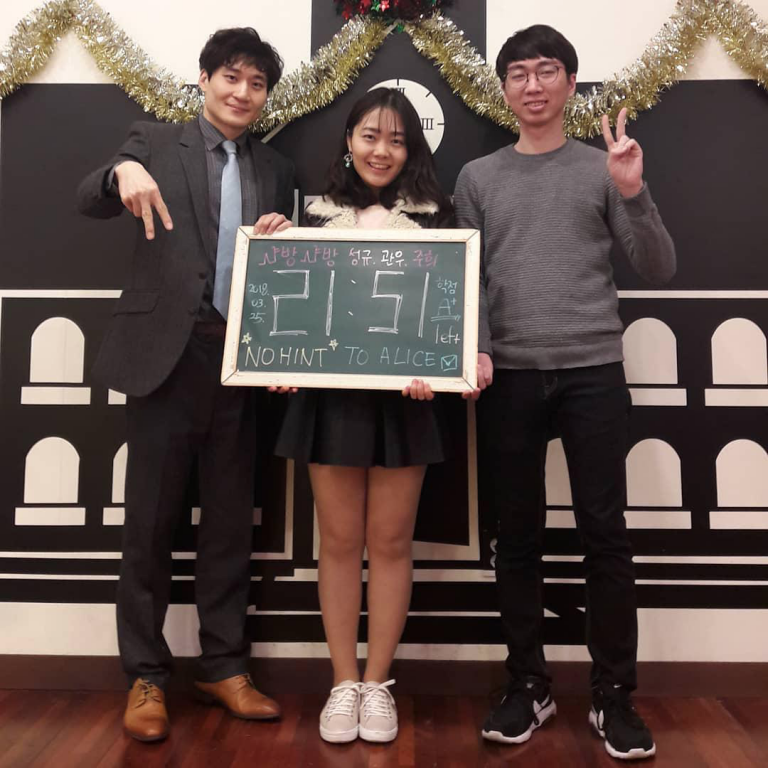 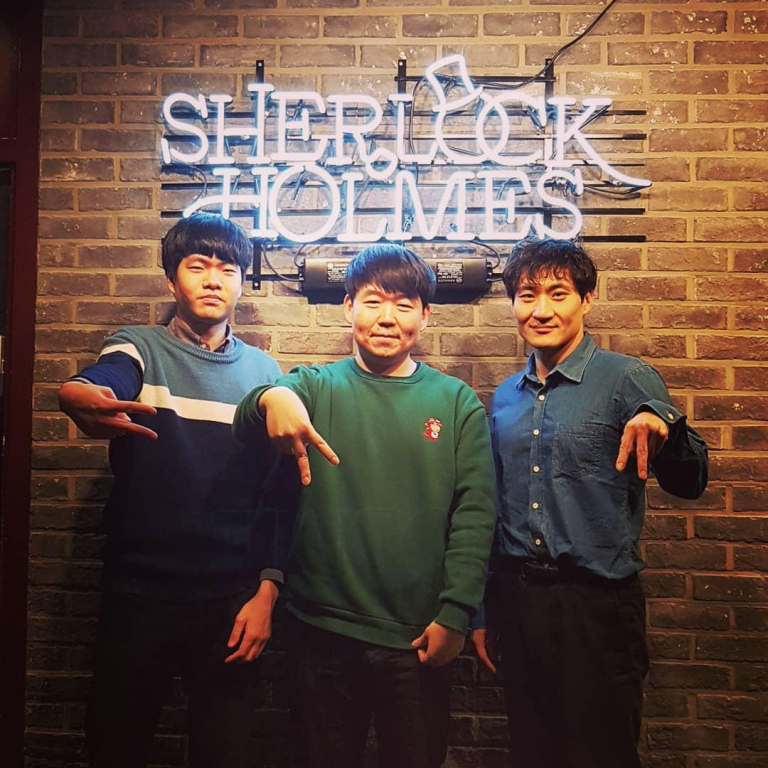 Do you have escape room friends that you often get together with?

It really depends on the room, but usually three to four people are a good number for a room. After the first escape room that I just told you about, I didn’t have people to do it with. But then in October last year, a friend introduced me to a room escape club, and I started doing it more often. The club’s for people from my school, and there are many people there who break a lot of records, so apparently it’s pretty famous in this area. 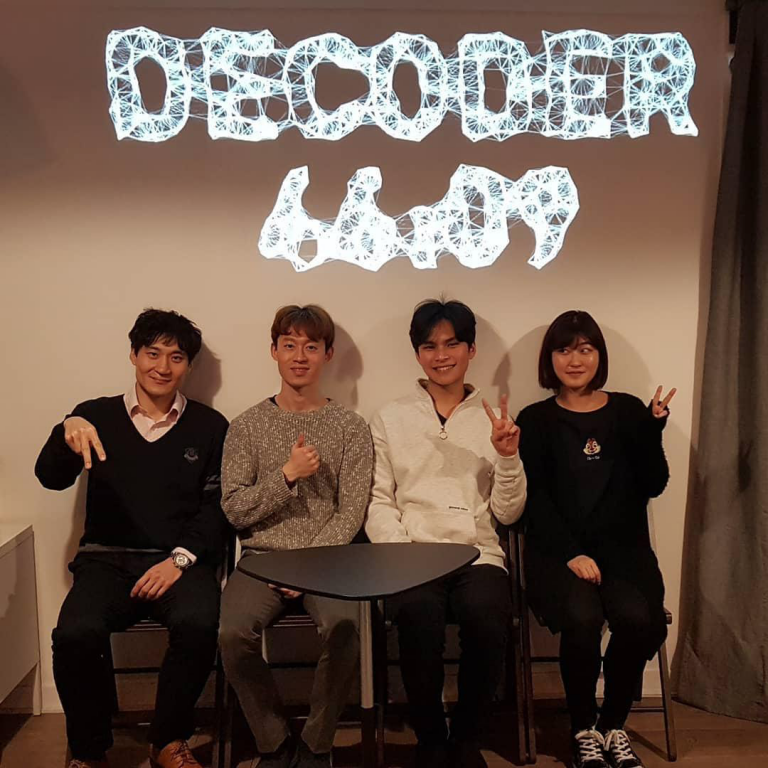 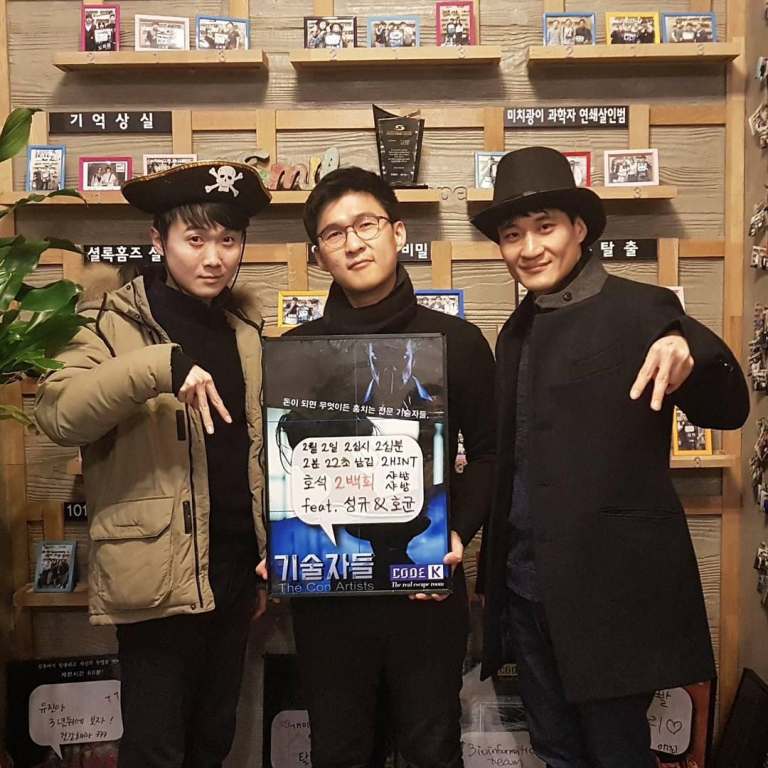 What’s the secret to escaping quickly? Where should you look first when you enter a room?

I’m still a newbie in the club… And it’s not usually me but the members who are still in college or grad school. Thanks to these brainiacs, we escape pretty quickly. There have been many times when I thought, I used to be able to do these things quickly too… Hahaha. From having observed how other people do it, you have to be observant. You might waste your time away trying to solve a question that’s really easy to solve once you find a hidden clue. So checking all the places thoroughly is important. And rather than looking at the clues as is, most of the time you have to think about it backwards or flip it around. 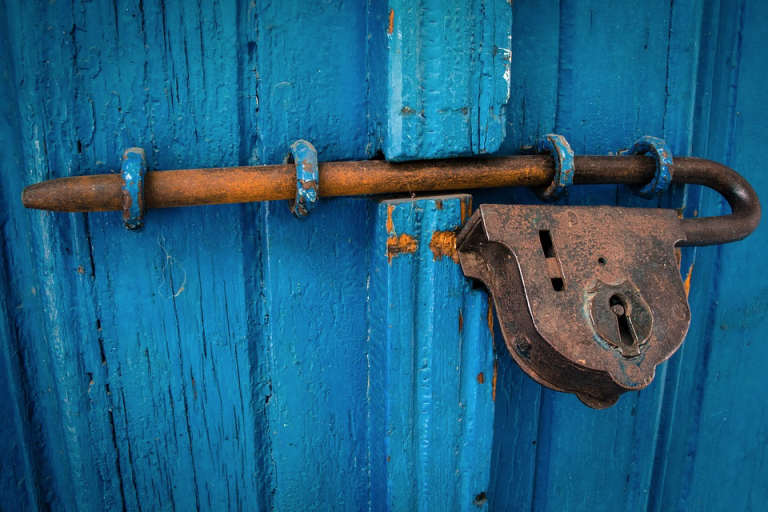 To add a little more to that, you usually don’t need expert knowledge to solve the questions. They’re based on more general knowledge. Like digital numbers, names of the planets, clocks and calendars, constellations, pi, logic questions, simple English… knowing these would be helpful. Of course, the questions usually require inexplicable “sense” more often than not… So it would be helpful to try solving a lot of trivia questions. To get a sense of what questions might be asked. 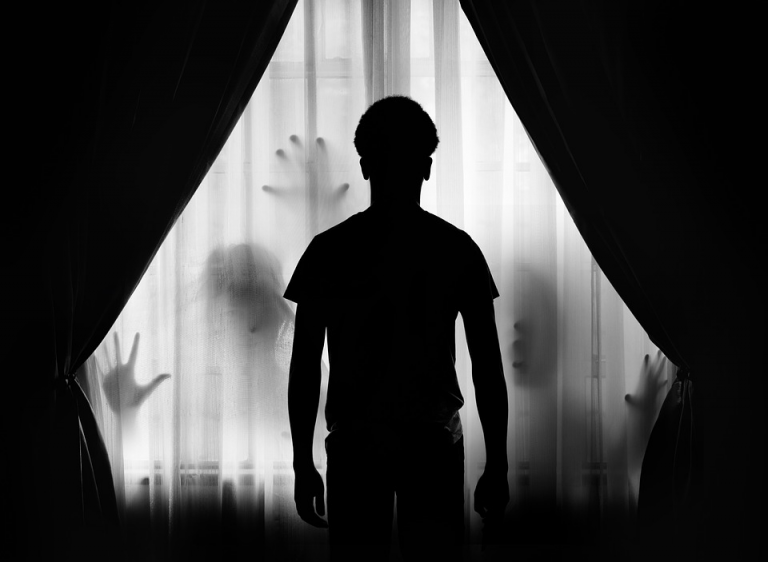 “A strange woman is calling me her husband.” You were in a car accident and seem to have lost your memory. You wake up to find a kind woman, staring at you worriedly. “Honey, are you okay?” But somethings doesn’t feel right! She leaves to get you some medicine, and now you have to find out who you are before she returns!

Was there a room escape game that you liked in particular?

I’ve escaped a little over 50 rooms. There are people in our club who have done over 300 of them, and some even go outside of the Seoul area to visit escape rooms. So I’m only a beginner. There were quite a few that I remember, but I think the one that I left an impression on me was the Strange Family in Shinnonhyeon. I actually failed to escape this room. It’s known to be difficult, but one of the questions (tricks) in the room was shocking. It was completely beyond my imagination. Now I know, so it’s not a big deal, but at the time, I was so shocked that I can’t forget it. 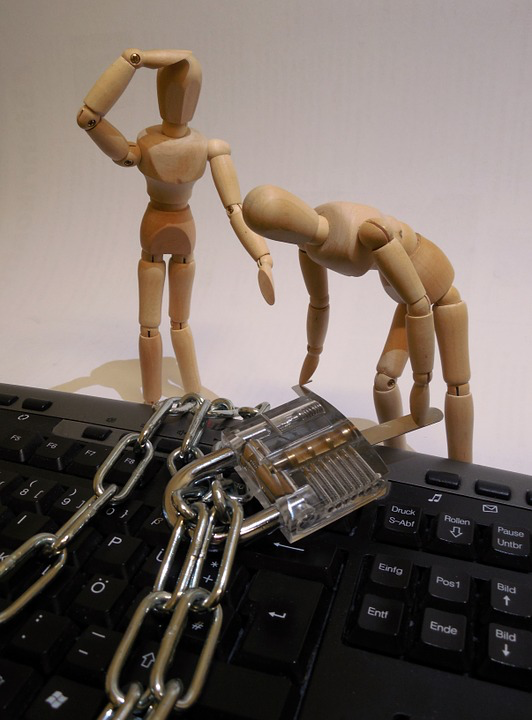 Who should you go with to escape rooms? I’ve heard that couples go in together and end up getting into fights because they couldn’t escape.

I think it’s better for people who like these kinds of activities to go together. You don’t have to be good at it, but at least be interested in it. For instance, the people in the club I joined share nothing in common other than the fact that we’ve all gone to the same school. We meet up, and we escape rooms. As for couples who fight, I think if you can embrace the other person’s flaws, you probably won’t get into a fight. *looks into the distance wistfully* 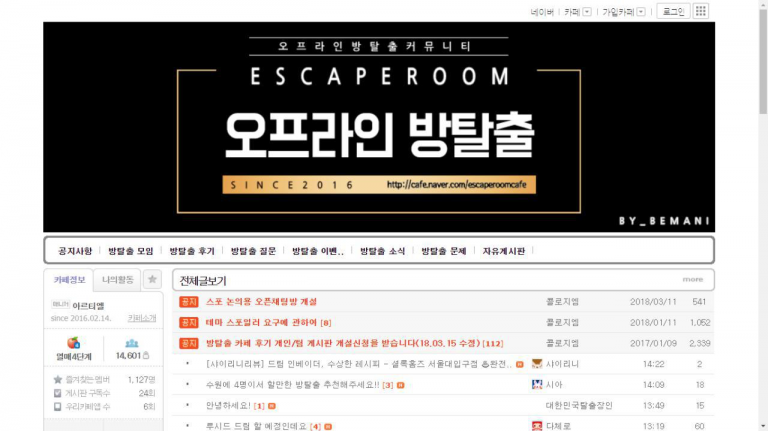 Is there a course that you’d recommend for beginners?

The most popular chains are Seoul Escape Room, Beat Phobia, Code-K Escape Room, and Room Excape. But you can find what we call “flower paths”, meaning well-made escape rooms, in a lot of different places, so you don’t have to stick to these. And even in the popular escape room chains, there are rooms with weird problems too. There is a popular online community called “Offline Escape Room”, so it might help you to read some of the reviews on there. 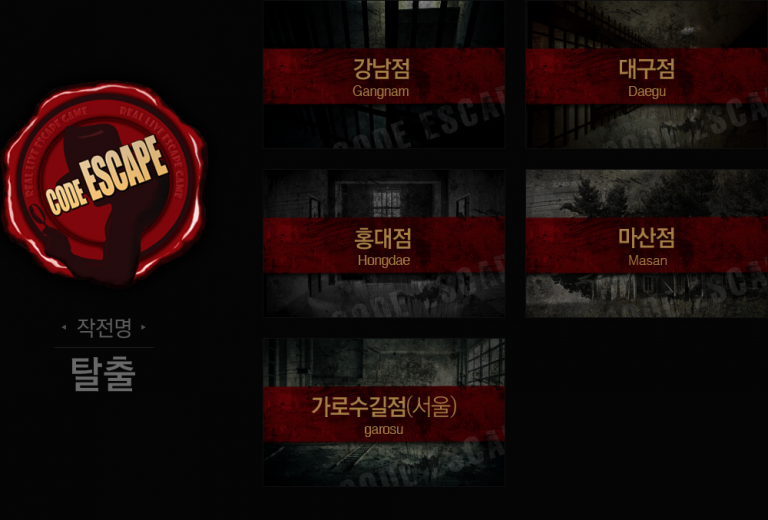 If I were to recommend one that doesn’t have a horror theme, since there are many people who don’t like that kind of stuff, and that’s not too difficult, I’ll say Introverted Thief at Decoder in Hapjeong, Romance in a Moonlit Night (Wolyaaedam) in Key Escape Gangnam, and Crazy Bear at Maison de Secret in Shinchon. The first one’s been designed by a new media art planner, and you can see all kind of interesting mechanisms that open without a key. The second one is a beautiful love story from the Joseon dynasty told in a beautiful hanok, and the last one is a rather interesting quarrel between two lovers in a cute bear club, so you won’t be terrified and they’re not too difficult either.

What would you like to say to people who decide that they’d like to try an escape room after reading this interview?

I think it’s good to try something that you want to try. You need to taste something to see if it’s good or not. But since this isn’t something you can do alone, I hope you can convince friends who like this kind of thing to try it. And after you try it, if you’re interested in doing more escape rooms, contact me via Instagram: @bismachia.