If there’s one thing Korean children are known for, it’s excelling at school. If there’s a second, it’s that they’re not overly happy about it. The education system plays its part—and this site will have more on that soon. But what of the parents? What do they want for their kids? And does Korean parenting fit with the Asian stereotypes of strictness and ambition?

Youngstrom has also spent the last eight summers at the University of Korea as an adjunct professor. Together, the two have worked on assessing mood symptoms in children, using the perspectives of both the parents and the child.

In this, the first of three conversations, they delve into the changing character of Korean parenting.

Hyowon Kim: You’ve spent eight summers in Korea. So you’ve met a lot of college students, some from Korea, some from other countries. From your time here, would you say there’s a specific Korean parenting style?

Eric Youngstrom: I think that it’s less that there’s a unique style of parenting in Korea, and more that one certain style is very, very common.

We talk about there being four different styles of parenting. Parents who are “low” or “high” on expectations, structure, and control, and parents who are “warm” or “cold”. And the styles that students in Korea seem to recognize and talk about most are the “authoritative” (high/warm) and “authoritarian” (high/cold). The “permissive” (low/warm) and “neglecting” (low/cold) styles seem uncommon. 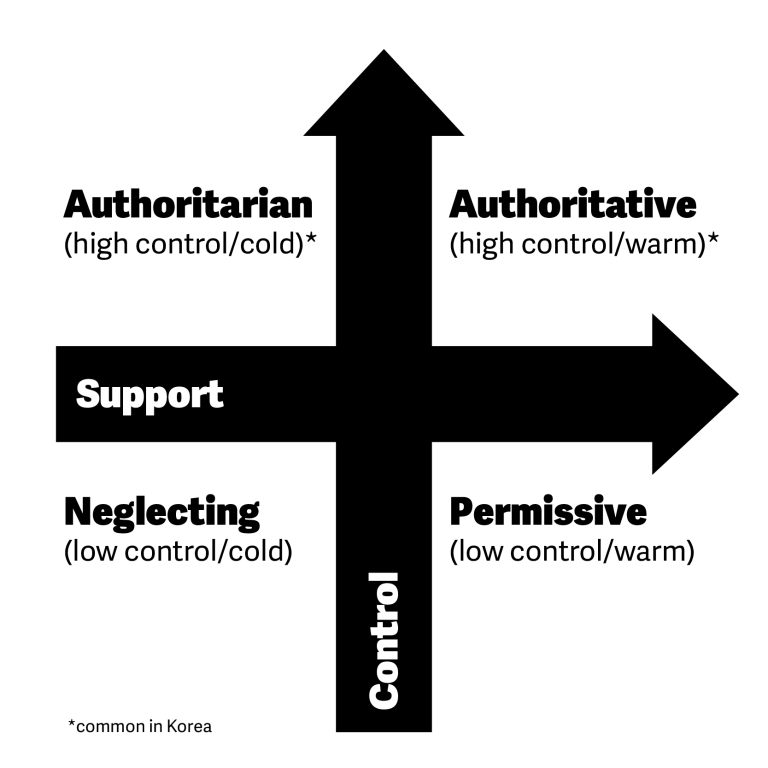 So parents are very invested. They’re thinking a lot about how to parent and are very high on the structure, the control and the expectations. And I’d say that what is especially strong in Korea is the expectations around education. Which is actually less about style and more about substance. What should we focus on? What should we talk about with our children? What do we have control of?

Have you noticed any changes in the last seven years?

Yes, I’ve been coming here seven summers now, like you said, and I sometimes ask myself about trends, if there have been any changes. And I think the biggest trend is that families are moving towards more warmth and more support.

This year I said to the students, “Okay, we’ve talked about you growing up and your experience, and we’ve talked some about whether that seems like a change from your parents’ generation, or your grandparents’. What do you want to do when you become a parent?”

“Do you want to have no rules?”… no hands went up.

“Do you want to have a medium amount of rules?”… Most hands went up.

“Do you want a lot of structure and rules?”… A couple of hands.

So I think that the trend that they’re reflecting is: “Our parents are changing. Our parents are keeping the high structure and high control, but they’re getting warmer. And we are wanting to get even a little further with the warmth.”

Like you said, many Korean parents emphasize academic achievement. They have high expectations and exercise high control. And I also agree that parents are getting warmer. And that’s because of changes in the wider culture. These days, “non-violent communication” between couples and within families is getting a lot of attention. And more and more therapy is focusing on conversation strategies between parents and kids. These kinds of cultural changes might well be contributing to the increased warmth.

What implications does this kind of parenting have for child development?

Then there’s the research about “warmth” versus “coolness”. Children with warmer parents show more social skills, are more confident, and often have more or better friendships. They have less depression, a little bit more quality of life, and better communication with their parents, more openness. So the value of “warmth” is not in the academics. At least not in the short term.

President Obama has talked about the academic achievements of South Korean kids. He admires how hard they work, how long they study, how much time they put in: Korean kids are in school for one month more per year than American kids. However, the American writer Mitch Albom, who spent some time in Korea, observed that American kids laugh more, play more sports, and express themselves more openly. I was so sad when I first read what he said. Whenever I talk with parents, I mention what he said and ask them what kind of person they want their kids to be. Many parents answer: “I want my kid to be happy”, ”I want her to be self-confident”, “I want him to believe in and respect himself.” If Korean parents give a little more control to their kids, and become warmer, our kids may be happier, more self-confident, and self-respecting.

I imagine you’ve read Amy Chua’s book, Battle Hymn of the Tiger Mother. There was a lot of interest in it here, but Koreans feel that she exaggerated the “authoritarian” aspects of Chinese parenting and Asian parenting in general. The harsh discipline, and the emphasis on academic achievement, for example. What did you make of the book? Do you see similarities between Tiger Moms and Korean Moms?

So I know the book. My wife Jen and I have discussed it and I think there is a lot of overlap. Many of our Korean students describe their moms as Tiger Moms, or as having aspects of Tiger Moms.

But I think some of the examples in the book are very extreme. And I think that a lot of Korean parents do not go to those extremes. A good parent doesn’t use a hammer when a tap would be enough.

I think what resonates with students here is the Tiger Mom’s high focus on academic expectations, the long hours, the lack of fun. But the Tiger Mom in Amy Chua’s description is very, very low on warmth and extremely high on punishment. And my students are saying that their parents are often medium warmth and, in many cases, are getting warmer.

So I’d say there’s a good 80% overlap. Korean parents still have very high expectations, but they’re not as extreme on punishment, and they’re becoming warmer.

What do you think though?

When I first read the book, I was so surprised. Amy Chua’s method of discipline is so extreme. Korean parents emphasize academic achievement. But we’re not so confident in our approach to discipline. We’re always second guessing ourselves. Korean parents have high expectations of themselves too, and we strive to be nice parents. So we’re constantly reading books, and we’re prepared to change. We’re even open to opposite styles of parenting, like the “Scandi Mom” who gives her kids more control.

Our mothers are really short on confidence. They emphasize academic achievement for sure, but there’s a lot of introspection too.

You can also read Part 2 and Part 3 of this conversation. Hyowon Kim and Eric Youngstrom would be happy to respond to your comments or questions. Feel free to direct any to our Facebook page or hello@thedissolve.kr.

Hyowon KIM  is a child psychiatrist at Asan Medical Center in Seoul, and an an associate professor at the University of Ulsan College of Medicine. She is currently working at Massachusetts General Hospital and the Broad Institute of Harvard and MIT as a visiting scholar. Reach her at shingubi@gmail.com.

Eric YOUNGSTROM  is a professor of Psychology and Neuroscience at the University of North Carolina at Chapel Hill, past president of the Society of Clinical Child & Adolescent Psychology, and an adjunct professor at Korea University. Reach him at eay@unc.edu.