Badabooks Publishing publishes independent magazines without advertisements. Among these are Womankind, a quarterly that aspires to speak in the language of women and find new value through their eyes, and New Philosopher, which tries to find a ‘more faithful life’.

On August 30, Media Today went to Badabooks Publishing and met with Na Hee-young, editor-in-chief of Womankind, and Jang Dong-seok, editor-in-chief of New Philosopher. Badabooks Publishing consists of three teams: the literature team, humanities team, and science team, which are respectively in charge of Womankind, New Philosopher, and Skeptic. The humanities craze has died down and feminist issues have been gaining more attention, but the publisher prints more copies of New Philosopher (5,000 copies), which was launched in January of this year, than Womankind (3,000), which was launched last November.

What is the language of women?

There are surprisingly few gender issues that are contentious in Korea, such as illegal photography and abortion. Womankind takes a step back and discusses issues that are not prevalent in Korean society. Editor Na said, “There is a bit of difference between the demands of the readers who consume books on feminism and Womankind. It’s not a magazine that argues for certain issues. It actually has a wider spectrum.

What does it mean that it speaks in the “language of women”? “The language of women that Womenkind aims to promote is to express the whole process of how women act and ‘be aggressive’,” Na explained. She added that “providing a space for women to steadily voice their opinions is the reason Womankind exists.”

In the fourth issue of Womankind, which was published recently, writer Kim Hana discussed why women writers in the past had to write under male pseudonyms, while Kim Jin-a, the head of Cafe Wolf Social Club, proposed that we should analyze the money flow in a male-male-centered economic structure and, if there is money that should be spent, we should spend it on women. Park Sun-young, former reporter, wrote a piece on gender discrimination in Korean society, particularly in the media industry, and her own experiences in the form of a letter to her daughter. These are all manuscripts that came after long considerations of localizing the Australian magazine Womankind. 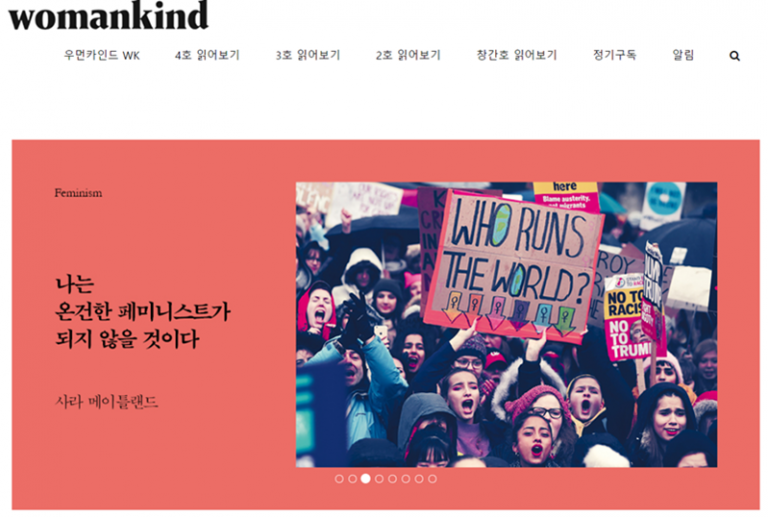 Na said, “(Our Korean edition) has different themes from the Australian edition and makes an effort to discuss issues that are relevant to Korea. Editor Jang said, “New Philosopher has the same themes as the Australian version, but because Korean readers are used to reading something that has an introduction, development, climax, denouement, and conclusion. Otherwise, the writing can feel awkward. So it takes nearly a month to translate, regroup, and redesign the magazine.”

In Womankind, around 70 percent of the pieces are translations of the Australian edition, which was launched in 2014, while the remaining 30 percent are by Korean writers. Other English speaking countries tend to expand on themes, to introduce alternatives to what readers are used to. But Na explained that that was not necessarily the case for Korean readers.

Womankind focuses on culture and humanities. For every issue, Womankind deals with about four or five different topics. In addition, it also selects one country and explores its people. The most recent issue focused on Iceland. According to the Global Gender Gap Report announced by the World Economic Forum, Iceland has been ranked as the world’s most gender-equal country for the past nine years. Womankind published an interview with Vigdís Finnbogadóttir, who was elected as the first woman president of Iceland in 1980, following a women’s strike in 1975, and maintained presidency until 1996. From the inaugural issue, Womankind has selected countries, such as Turkey, Tanzania, and Tibet, and their women. 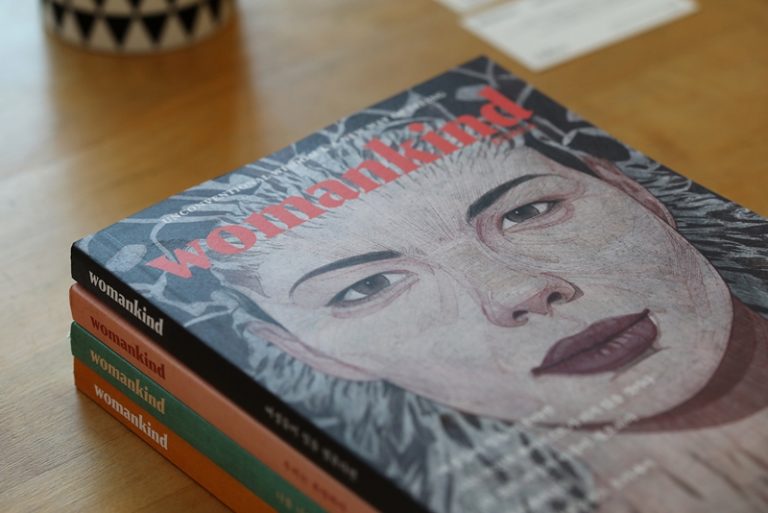 Its readers are mainly women. Na said, “About 90 percent of our readers are in their late 20s to early 30s.” Perhaps the name of the quarterly serves as a barrier for more readers. “Actually the difference between Western feminism and Korean feminism might be a barrier.”

Gender issues are mainly of interest to women, but they have implications for men as well. Na commented, “Our society will continue to change and gender issues will continue to be hot topics. So you can’t ignore this magazine for its name, thinking that it’s only for women. Existing mainstream discourse is male-centered, so I believe that Womankind can serve as an alternative discourse.” There are several feminist magazines, but because of its characteristics, Na believes that Womankind can “be an alternative women’s magazine as well.”

“I think we need to exclude professors from contributors. I aimed for a daily philosophy magazine, so it’s a bit much to discuss Heidegger and such. I want to include young critics, poets, and writers as our contributors.” “

New Philosopher aims to influence people’s lives by explaining philosophy in layman’s terms. Jang said, “In our inaugural issue, I asked writer Kim Min-seop to write about how using smartphones results in face-to-face interactions without talking about the antiquated communication theories.” In the article, Kim wrote about his experiences of communicating with his lover through different means of technology, from beepers to cellphones to smartphones.

On August 30, Jang Dong-seok, editor-in-chief of New Philosopher sat down for an interview with Media Today at Badabooks Publishing in Mapo-gu, Seoul. | Lee Woo-rim

Jang said, “Young readers in particular share their feelings through experiences, so we try to publish articles like this one.” The theme of the fourth issue, which will be released in October, is sports. “I asked a woman critic who loves soccer to write about ‘why someone who works in the world of cricitism, where there is no winning or losing, is engrossed in winning or losing.’” New Philosopher’s philosophy is not difficult.

Using the Australian issue as a basic frame for the Korean edition, the editor-in-chief condenses the somewhat unfocused topics and finds Korean writers who can fill the void. Jang explained, “The reason GQ has lasted for so long is because they deliver the same information in different ways. I’m always thinking about about ways to introduce and localize the philosophies of the English-speaking world.”

The readers of New Philosopher are also Koreans in their 20s and 30s. Jang said, “I thought that there might not be a clear-cut readership for our magazine, but surprisingly young people were interested in humanities and philosophy.” He added, “Until now, humanities and philosophy were for those boring people who always recited big words, but our readers are responding to the appeal of the ‘philosophy of daily life’.” 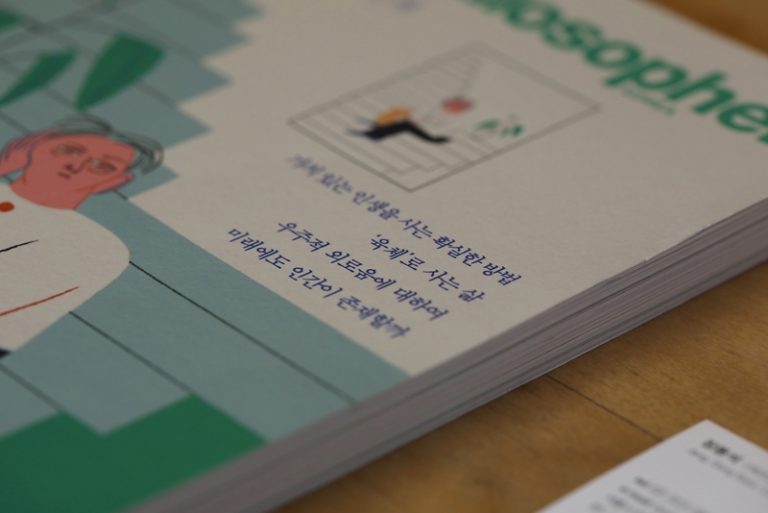 Both magazines are concerned with the question of “what kind of life to live” and dream of the magazines’ survival and prosperity. “We can’t lose money,” said Na. “We won’t fold easily, but the life span for magazines has shortened in recent years,” said Jang. “I told a friend to be a regular subscriber to New Philosopher, and he said, ‘You’re going to do this for at least three to four years, right?’ It’s become more and more difficult to survive.”

The next issue of Womankind will be released in November. Since it was launched in November 2017, the upcoming issue will be a one-year anniversary issue. It is time for the magazine to be objectively evaluated. Next January will likewise mark the one-year anniversary for New Philosopher. Na said, “We’re feeling the need to see the online reactions offline with our own eyes.” The two magazines do not publish advertisements in order to stay focused on their vision and also as part of their contract with the Australian editions. They simply compete with the quality of their content.

Based on the experiences of publishing books, back issues have been dropped, and both magazines strive to publish evergreen content that will sell steadily. The latest issues of the two magazines have been published as ebooks as well.

As Na said, competitive edges for the two magazines are that “writers who have created books with the editors can participate in the magazines as contributors” and the “strength of the content often found in monographs and the pace and urgency of issues dealt in magazines”. Jang remarked, “The market for weekly news magazines is nearly dead. The decisive factor is to show stories that have lasted over the years in interesting ways.”

JANG Seul-ki  writes for Media Today. “In a world in which all living things become dogs with their eyes to the ground, I see them and don’t shut mine. The seer is superior to the seen.”