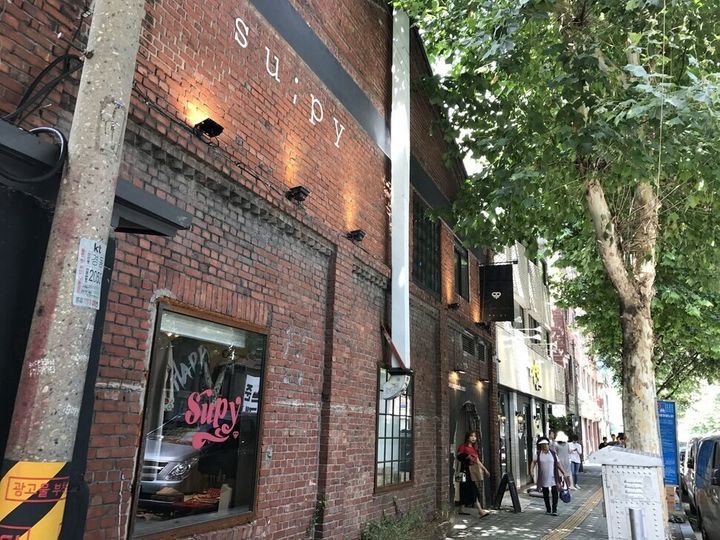 A factory building in the red brick area of Seongsu-dong. | Courtesy of Hankyoreh

Koreans have dubbed Seongsu-dong the ‘Brooklyn of Seoul’. (Of course, when I asked an architect who works along the Seongsu-Ttukseom-Seoul Forest Belt about the meaning behind the term, my question was met with an irrepressible spasm of laughter.) It may have been coined by the media to describe the phenomenon of turning a former factory district into new spaces while maintaining the old exteriors, but there seems to be no better term to describe directly the characteristics of the district. It is clear that today’s Seongsu-dong sports a unique look that cannot be defined other than by using examples from abroad.

The timing was perfect. In the past, the logic of development for semi-industrial districts would have called for Seongsu-dong to be bulldozed, but thanks to the urban renewal movement, the district was able to maintain its old-town atmosphere for the most part. When the disastrous results of the gentrification of a number of neighborhoods, starting with Gyeongnidan-gil, made headlines in the media, local governments adopted ordinances to establish minimum guidelines to address the surge of franchise businesses and the decimation of small businesses. Above all, geographic location was key to Seongsu-dong’s survival. Seongsudaegyo Bridge and Yeongdongdaegyo Bridge connect the district to the center of Apgujeong and to the Luxury Fashion Street in Cheongdam-dong respectively, which means that people can easily move across the Han River. For instance, Hongdae used to be the only hangout outside of Gangnam for one of my acquaintances who has always lived in Gangnam, but now they spend their time in Seongsu-dong.

I have been commuting to the heart of this district for work since last winter. My company is extremely close to Seongsu Station on Subway Line 2—within a five-minute walk from Exit 3 or 4. When I tell my friends where I work, they often exclaim “Oh wow!” and ask me to recommend popular places to visit. And every time I answer, “I never go more than 50 meters from the office.” In fact, the new person in our office, who joined our company earlier this year, knew way more trendy spots in Seongsu-dong than my other colleagues and me combined. And they weren’t even particularly in love with the neighborhood.

Once, another colleague asked me to join them for a trip to a coffee shop to use a free coffee coupon they’d received outside the subway station. They weren’t going to take it, but had liked the pretty design. We travelled a long way for a cup of free coffee, and with a cup of Americano in my hand I looked around the coffee shop and said, “You can smell the money here. Do you think this is one of those hatpeul[1] people talk about?” And soon afterward, the place became an Instagram sensation. The name of the coffee shop was Seongsuyeonbang.

This anecdote provides some important context in understanding Seongsu-dong today. Starting last year, huge knowledge and information centers began to open in the neighborhood one after another. The buildings, surely maximizing the floor area ratio, were filled by numerous startups. Men and women in their 20s and 30s, who have small but stable incomes and are sensitive to new trends, fight to get out of Seongsu Station every morning. They have to eat lunch in the neighborhood and drink coffee afterward. When they work overtime, they eat dinner and sometimes make plans to meet friends nearby. So where do they spend money on weekdays? In Seongsu-dong, where they work.

In the past, trendy hangouts in Seongsu-dong endeavored to attract those who liked to sniff out new places and experience them before everyone else, as well as those who followed them on weekends. But now, there is no need. On weekdays and nights, there is a steady flow of people in their 20s and 30s who come to Seongsu-dong. If the restaurants and stores in the neighborhood target this population, they can be confident of closing on weekdays with decent takings. And on weekends, people from other neighborhoods come to visit too, following the social media posts of the people who work in this area. I, for instance, go to Cafe Onion when I’m in the mood for bread and pastries. I head over to Cafe Poze for coffee. And when I feel like taking a short stroll after a meal, I walk to OR:ER. Why do I visit these hatpeul? Because they’re close by. Because it’s easy to get there.

Most of Seongsu-dong has a high floor area ratio, since the neighborhood was once a semi-industrial district, which means it is relatively easy to develop. Thanks to the knowledge and information centers, people in their 20s and 30s fill the streets on weekdays, while tourists crowd the neighborhood on weekends. On top of all this, Konkuk University Station, which is the biggest commercial district in eastern Seoul, is a stone’s throw away. After 25 years in Mokdong (the backwoods in terms of public transportation), located in western Seoul, I recently moved into an ‘officetel’ apartment near Konkuk University Station with a friend. Every morning, I look out of my 13th-story window at the view of the city between Konkuk University Station and Seongsu Station, imagining the ways these two districts will be developed, expanded, and possibly connected in the future. Since it has now become my home and workplace, Seongsu-dong is now certainly a different place for me than for others, but in a way it is the same. And this is why Seongsu-dong’s current situation feels significant to me.