Our society still disapproves of single parents. This series aims to give voice to the single parents who decided to raise their babies born out of wedlock despite social prejudice and economic difficulties, and discuss out-of-wedlock births with a new focus on the children’s rights and parents’ rights. — Baby News

“I still haven’t gone to a mommy group meeting. I heard that if moms get along, they have an easier time working out problems between their children. But I still don’t know whether I should tell them my real age or not, because I don’t want my children to get hurt. (If other mothers) find out my age, I’m afraid that they might be biased or prejudiced against me for having children at a really young age…”

Jang Ji-eun (24, pseudonym) gave birth to two sons—Gang Seol-min (pseudonym) at the age of 17 and Gang Ha-min (pseudonym) at the age of 18. On May 14, I met Jang at a cafe in Cheonan, South Chungcheong Province. She spoke about the social stigma of out-of-wedlock births, saying, “Many people were critical of having a child at a young age when I gave birth to Seol-min. Things seem to have changed a lot in recent years, but I’m still worried about telling people my age.”

As the eldest of two girls and two boys, Jang was able to raise her two children with the help of her mother, the maternal grandmother, and brothers and sister. But the real unsung hero of her story was her father.

“When my father found out that I was pregnant, he told me to go with my mom and get an abortion. So I ran away from home early the next morning. Then, around the time when it was impossible to get an abortion, I contacted him again, and he took me back. My father passed away when I was pregnant with my second baby, before I split up with the father of my children. He had been suffering from illness, but I felt like it was my fault… I’d never told him how sorry I was, and that’s been a lifelong regret.”

A month or two before her second son was due, Jang split up with the father of her children. He had no sense of responsibility as a parent and behaved the same as he did before the children were born. Because both Jang and the father of her sons were minors at the time, they weren’t able to register their marriage. Her two children still use the father’s last name, which Jang wasn’t able to change due to the complicated process and costs involved in changing last names. 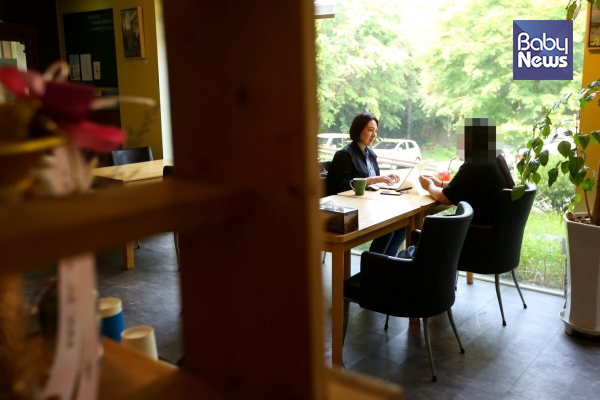 Jang found out that she was pregnant at the age of 16, in the second semester of her third year in middle school. Thinking back to that time, she said, “There was no question about having this baby. It wasn’t a conviction really. When we learned about abortion in school, I decided then that I wouldn’t get an abortion.”

Due to a serious bout of morning sickness, Jang didn’t go to school during her pregnancy. She lived with the father of her baby, who was the same age as her, at his grandmother’s home. Her water broke before the due date, and she had a premature birth. Jang’s family paid for everything—expenses during the pregnancy, the cost of operation after the delivery, and the cost of raising the child. The baby’s dad’s family didn’t offer a cent. In fact, Jang said that the boyfriend’s grandmother scolded her many times about how she should’ve been more careful.

“I got pregnant again three to four months after I had Seol-min. I’ve always thought that I’d never get an abortion, but having Seol-min and raising him made me think about how unlucky the children would be. So I had an abortion and suffered from depression afterward. After that, I was surprised with another pregnancy. Because of the shock from the previous abortion, I couldn’t have another [abortion]. But I couldn’t tell my parents either. So I was keeping it a secret, then my father passed away.”

Jang kept her pregnancy a secret until the last month. She thought about giving her second child up for adoption and even met with an adoption agency. But after talking to her mother immediately before the delivery, she decided to keep the baby.

I was worried about being too young

Around the time her first son Seol-min turned three, Jang began to send her two sons to preschool and go to work. She’d send her sons to pre-school in the morning and head off to work, and either her mother would pick up the children or else her younger siblings would on their way home from school. Jang was able to raise both Seol-min and Ha-min, thanks to her family’s full support.

“Both my parents’ families loved me when I was growing up, but after I gave birth, people started blaming me for my father passing away. My relatives began to see me like a black sheep, and I ended up severing ties with my father’s family. Even with my mother’s family, I don’t talk to some of my relatives.” Jang said the reason she had to sever ties with her relatives was their lack of understanding.

As the mother of two children, she said, “I worried a lot about attending events at my children’s preschool, such as the entrance and graduation ceremonies, because I was afraid of being the only young mother. Thankfully, many mothers these days make an effort to look young and there were many mothers who actually looked young, so I didn’t have to worry much. People didn’t seem to care much about what other people looked like.”

When she takes her children to the hospital or on public transportation, Jang doesn’t hide the fact that she is a mother. When people ask her if her sons are her brothers, she proudly says that they are her sons. Sometimes, people say, “How cute! Must be good to have a young mother.” Jang said that contrary to many expectations, she didn’t have a hard time because of judgments from strangers.

Jang actively participates in economy lectures, parenting classes, outings, and other get-togethers held at local children’s centers and Health Family Support Centers to learn and communicate with others.

“My child acts out, and I feel like it’s my fault” 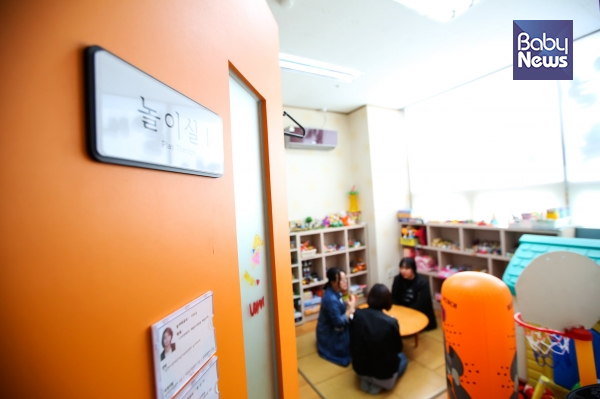 On May 14, after the play therapy session for her first son Seol-min (pseudonym), Jang Ji-eun (pseudonym) is listening to the therapist’s explanation. Seol-min has been receiving play therapy once a week since March. | Kim Jae-ho / Baby News

On May 14, after the play therapy session for her first son Seol-min (pseudonym), Jang Ji-eun (pseudonym) is listening to the therapist’s explanation. Seol-min has been receiving play therapy once a week since March.

For two months now, Seol-min has been receiving play therapy. When Seol-min was four years old, Jung had him receive art therapy, wanting to know what he was thinking, only for his preschool teacher to call Jung to tell her that he had hit another child. Seol-min also received speech therapy until he was six because of speech delays. And starting in March this year, at the age of eight, he began to attend play therapy sessions.

“In the first month of elementary school, Seol-min started acting out, hitting other children, running out of school, or hiding in the bathroom during class and making the teacher look for him. So we started play therapy for him. The biggest issue that came out during the therapy sessions was the lack of mother’s love. We’ve had to spend a lot of time apart since he was a baby, and I’m not the most affectionate person, so I think Seol-min is craving love.”

Jang continued, “I think we’re getting better. From the outside, it looks like Seol-min is going through therapy, but I’m the one getting a lot of help regarding my choice of words or actions. The counselor gives me tons of advice about caring for him through affectionate words and expressions.”

She also expressed her guilt and heartache, saying, “I look into his face when he’s sleeping, and my heart breaks from thinking that he would’ve been fine had I learned enough and raised him better… I feel like he’s acting out in school now because I couldn’t take better care of him when he was younger. I’m an adult, so I can handle difficulties, but he’s just a child. I feel terrible and guilty that I’ve created this situation.” 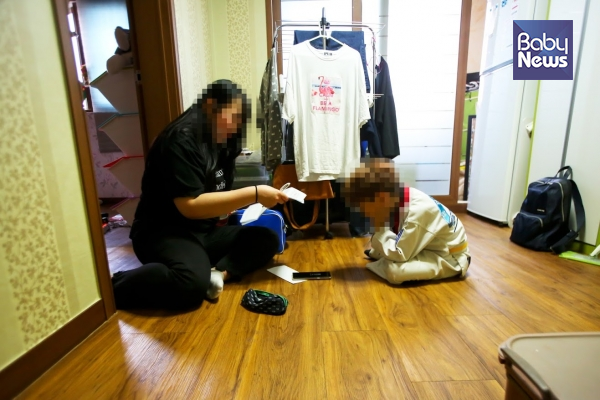 Since she was 19, Jang has worked morning and night at restaurants, convenience stores, etc. She receives basic livelihood security and works whenever she has time, but when those aren’t enough to cover her expenses, her mother lends a hand. She never had a regular job. Although there are other people who could take care of her children after school, she still has to see her children off to school in the morning before heading to work.

Currently, Jang works as a liaison, receiving home craft assembly work from companies and distributing them to people. When there aren’t enough people, she does the work herself as well. It’s an irregular job.

For about a year and six months, he has been living with Seol-min in a one-room apartment. Her maternal grandmother, who used to live in Cheonan but moved to a different city, is caring for her younger son, Ha-min. Jang’s grandmother has been like a second mother to Jang, having raised her when she was young. Jang feels safe to leave her child with her grandmother, because she took care of Jang’s two sons when she lived in Cheonan.

“I’m focusing on taking care of Seol-min now. There is a lot I’m concerned about, like Seol-min adapting to school and making friends. Recently, Seol-min and Ha-min had a chance to spend about three days together. I think they want to be around each other and need each other. I’m planning on moving soon. Once I do settle down a bit, I’m hoping to bring Ha-min from my grandmother’s.”

Jang said, “I’ve regretted having them far more often than I’ve thought it was a good decision, because I’m raising them in such an unfortunate situation and can’t do what other parents do for their children.” However, she smiled as she remarked, “But when I see them following me around and trying to take care of me, I think, ‘Somehow I raised them all these years’ and ‘They’ve grown a lot’.”

Lastly, to the question, “What kind of person do you want your children to grow up to be?”, she said this. “People say that being ordinary is the most difficult. But I hope that Seol-min and Ha-min can grow up like ordinary children who can at least cover the basics.”

This article was originally published in Korean on May 25, 2018, and is the first in an award-winning series by Baby News. Have a question for the writer? Send us a mail or sign up for the newsletter.

KWON Hyeon-gyeong  is a staff writer at Baby News.