This article was originally published in Korean on October 26.

Coincidentally, Hyundai announced its earnings the day after Tesla announced its own. Naturally stock analysts compared the operating margins of the two companies. On Facebook, Koh Taebong, an executive director at HI Investment & Securities Research, expressed his surprise. “I never thought that there would come a day when Tesla’s operating profit exceeds Hyundai’s,” he wrote. “I thought that we need to be more flexible in our thinking, but I did not expect this day to come.”

According to the securities industry, Tesla had an operating margin of 6.1 percent or KRW 473 billion, which wasn’t very high. But Hyundai’s operating margin was a mere 1.8 percent at KRW 288.9 billion. Since the cars were produced in Korea and exported to the United States, Hyundai’s earnings were affected by the dollar-won exchange rate, as well as recalls. The increase in the number of eco-friendly cars was also seen as an unfavorable factor.

Koh pointed out how the two companies responded in the opposite manner regarding the ‘increase in the number of eco-friendly vehicles’, writing, “Hyundai argued that its earnings were affected by the increase in the number of eco-friendly cars, while Tesla expressed that the company achieved economy of scale through the mass production of Model 3.” He also advised against over-interpretation of the numbers because “There are a lot of things that we need to consider.”

The reason for low returns? There is nothing to save

The Korean media and securities industry all began to criticize the automobile industry and auto parts companies and explained that Hyundai’s operating profit was cut down to a quarter. KBS analyzed the earnings from January to September and indicated that five car manufacturers—Hyundai, Kia, GM, SsangYong, and Renault-Samsung—were in a “triple slump” with decreasing production, domestic demand, and exports.

In particular, they pointed to Hyundai’s sluggish exports, particularly to the American market, as the biggest problem—and strategic failure as the cause. They explained that the American and Chinese markets have shifted focus to SUVs, and Hyundai was too late in jumping in. Another regular problem that comes up, other than strategic failure, is the exchange rate. However, none of this explains why the profits are much worse compared to sales since sales would be the first to go if there were problems with product composition or exchange rates.

A slightly more meaningful argument places the large-scale recall in the United States as a major culprit. But there is an even more convincing explanation: the average price of Hyundai cars is lower than that of its competitors and Hyundai gives excessive incentives when sales are down, which negatively affect profits. In sum, cars don’t sell well, so the company has to sell them for cheaper, and this drives down the profit.

The American press has been lavishing unprecedented praise on Tesla’s earning surprise, which was in direct contrast with Hyundai’s earning shock. Tesla doesn’t advertise at all and isn’t very friendly to the American press, which is perhaps why it hasn’t typically been in their good books. Tesla was a regular punching bag for the press, and there were recent rumors about the company’s bankruptcy. But everything changed. The media went crazy to the point that I wondered if it was okay that they were changing opinion so drastically.

Are Tesla profits here to stay? 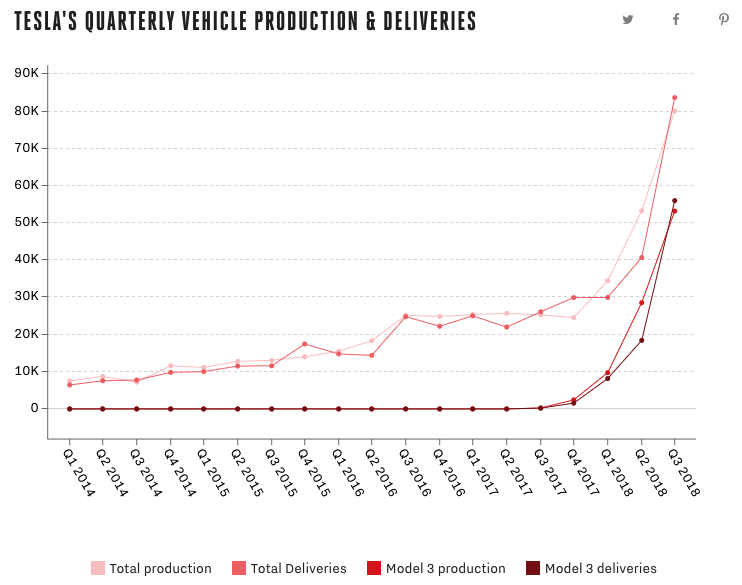 Considering the size of its deficit, this profit of KRW 400 million seems like a meager sum. But the American press sees this as a turning point.

People say that the decrease in the prices of batteries and motors for EVs, which had been extremely high until recently, also helped Tesla’s earnings. Tesla also announced that the company was able to cut 30 percent of its production time compared to the previous quarter and that it plans to cut this further and reduce the production cost as well.

But we still need to see whether Tesla is really on an earning streak.

American car manufacturers have to produce a certain number of eco-friendly cars in order to meet the CAFE (Corporate Average Fuel Economy) standards or purchase carbon credits from other companies. Since Tesla has more than enough of them, the company had been selling the credits to other companies, to the sum of USD 52 million (KRW 60 billion) in the third quarter alone. However, with other companies gradually increasing the number of low-emission cars, profit from such transactions is expected to decrease.

Third, the USD 7,500 federal tax credit for anyone purchasing EVs is being phased out. From January to the end of June next year, the tax credit will be cut by half (USD 3,750), and in the second half of the year it will fall a further quarter (USD 1,875). A considerable number of customers cancelled their reservations and purchased EVs that are easier to buy, such as Chevrolet’s Bolt. This doesn’t seem to have fazed Tesla, which announced that less than 20 percent of the reservations were cancelled, but it is certainly not a small number.

The biggest problem, however, is whether Teslas will be as durable as cars from other manufacturers. The US Consumer Reports ranked Tesla the third worst brand in terms of reliability.

Not only that, Tesla has USD 1 billion debt it needs to repay in the next six months, and it seems difficult for them to get additional investment to pay the debt. However, some believe that once Tesla recovers its profitability through its investments in solar energy and storage businesses, the company may be able to easily overcome such obstacles.

You can never be sure of anything in the automobile industry

The fourth quarter seems more complicated for Tesla than the third quarter earnings the company released. Elon Musk has stepped down as chairman of Tesla Motors after being accused of securities fraud for a tweet in September. In addition, the US Securities and Exchange Commission (SEC) even ordered that Tesla hire a lawyer to monitor Musk’s Twitter and all social media communications. Therefore the opinion that we need to sit and wait for three more quarters to see how things pan out seems convincing.

Elon Musk sees China as an important market. Until recently, he planned to sell some of the American made Model 3s to China. When the trade war between the two countries led to a 40 percent tariff on imports, Tesla accelerated the establishment of factories in China. The company recently signed a contract for a plot of land in Shanghai for its next Gigafactory, to produce batteries and cars, so its plan to produce the Chinese Model 3 in China is underway.

Hyundai Motors is also making every effort to revive its popularity in the US and in China, but it does not seem to be working as well. In the US, the company has been under fire from the press due to vehicles catching fire. Just as BMW received a lot of spotlight in Korea for cars bursting into fires, Hyundai and Kia cars have been on the news constantly. Chinese brands have been growing in China, while premium brands from Germany are also stepping up their game.

Hyundai is planning to focus on the Southeast Asian market, starting with Vietnam, and to stay in step with India’s development to hold onto the future growth engines. However, in terms of profitability, the prospects are not very rosy. Hyundai makes cars in CKD (completely knocked down) format, most of which require the use of local auto parts companies. Generally, companies use ASEAN to enter the Southeast Asian market, which has a high tariff barrier, and tariffs are only removed when 40 percent of production occurs in an ASEAN country.

Car manufacturers are fragile in certain aspects in spite of their impressive appearance, and many mega corporations of yesterday have fallen into an abyss of difficulties today. In addition, no one yet knows whether the skills and assets that gasoline car manufacturers have will be a help or hinderance once changes are made in the car market to focus on EVs and self-driving cars. Therefore this time of change could be an opportunity for new brands. We don’t know what is going to happen in the future, but it seems clear that everyone needs ‘flexible thinking’.

Han Yong KIM  writes for Motorgraph. Reach him at hy.kim@motorgraph.com.