There is no Jason Bourne style action at all, and while critics like to call it le Carré I would say the characters are more intense. For what it’s worth, I didn’t like the way the director tweaked the true story to fit the film, especially how the protagonist turns the tide at the end. 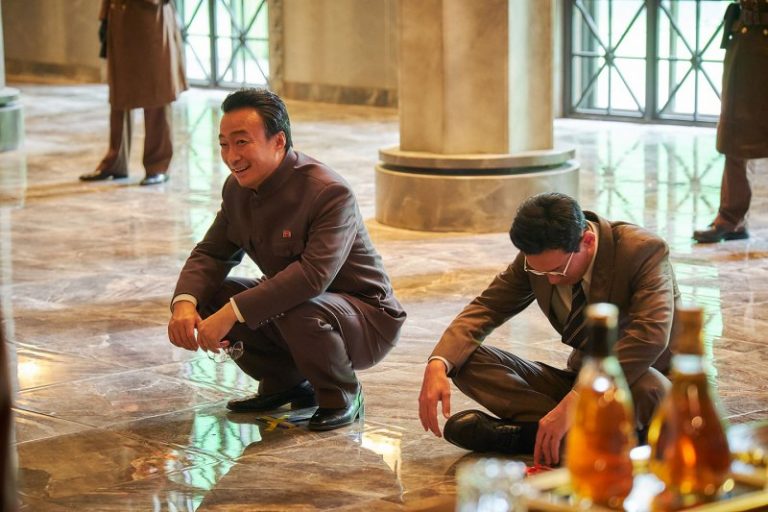 By the way, the real star of the film is Lee Sung-min (left), who plays the North Korean trade official. | The Spy Gone North / CJ E&M

As you may be aware, the film is based on the true story of Park Chae-seo, former intelligence operative of the Agency for National Security Planning (ANSP), or ankibu. (Like some North Korea watchers prefer bowibu to “State Security Department”.)

Park Chae-seo is one of the most successful spies in the history of South Korean intelligence—he even managed to meet Kim Jong Il in person.

His operational aim was to infiltrate North Korean leadership under the guise of a businessman interested in making money off the two Koreas.

And his business went well.

Until he got in the way of his bosses’ mission to prevent Kim Dae-jung from becoming the next President of the ROK.

When Park walked out of jail after serving six years for violating the notorious national security law, which he argues to be a set-up by the NIS which had an axe to grind with him, he had four notebooks in his hand. They were, in a way, his memoir.

Veteran journalist Kim Dang, who broke numerous news stories with Park’s help during the 1997 Presidential campaign, has now written a two-volume non-fiction account entitled Stratagem, or 공작. (It bears the same Korean name as the film, The Spy Gone North, which was released shortly after.)

Kim wrote these books based partly on Park’s notes and partly on his own experiences. Kim gently boasts about being able to cross check Park’s details which are, due to their nature, very hard to verify.

We can be quite sure about Park’s unintended entanglement in the 1997 Presidential election. And Kim, for his part, was a very capable journalist and had the guts to defy ankibu and kimusa (ROK Defense Security Command).

When it comes to what Park experienced and heard from North Korean officials, however, there is little way to verify what he claims to have heard. I can only say that his account pretty much makes sense.

The CIA office in the US embassy in Seoul is no doubt busy translating the meat of the book as you read this (or maybe they’re already done?). I won’t be able to beat them on speed but I can share some of the most intriguing stories.

1. US Intelligence determined NK nuclear program as early as 1992

Before he joined the ANSP, Park Chae-seo was a military intelligence officer. Part of his role was cooperating with US intelligence, and in one mission he and his counterpart were tasked with gauging the progress of North Korea’s nuclear program.

Park says Pyongyang at first received technology assistance from the Soviet Union and, after the collapse of the Union, from China. The Chinese military was willing to help Pyongyang conduct a nuclear test in the Gobi Desert but its political leadership was opposed.

As of 1991, Pyongyang had managed to develop two low quality warheads, he says.

To find out how much technology Beijing gave Pyongyang, Park found a way to turn one Chinese Korean scientist who had a role in Sino-NK nuclear cooperation.

With the scientist’s cooperation the US determined that Pyongyang had indeed been developing nuclear weapons. But to Park’s surprise, the US never shared the intelligence with Seoul. The South was there therefore caught by surprise when the North Korean nuclear crisis broke out in 1994.

2. Even Pyongyang didn’t want Kim Dae-jung to be the next ROK President

Park Chae-seo didn’t have much interest in domestic politics but was very aware that Kim Dae-jung had been labelled a pro-North communist.

So he was dumbfounded when he found out that Pyongyang not only enjoyed watching Seoul and the ANSP slander Kim but also actively attempted to frame him. In August 1997, they lured Cheondoism leader Oh Ik-je, a long-time supporter of Kim Dae-jung, to defect to the North.

A North Korean official told Park why Pyongyang didn’t want Kim to be the next President of South Korea:

When Oh Ik-je defected to the North, one senior ANSP official sent out press release guidance to its overseas outpost managers. The purpose of this guidance was to influence the international press into depicting Oh’s defection as having something to do with Kim Dae-jung.

Hwang was known as the father of Juche, the official state ideology of the DPRK. And as a former chairman of the Standing Committee of the Supreme People’s Assembly, his defection was seen at the time as a sign of the forthcoming collapse of the North Korean regime. (Which, like the Rapture, is still awaited.)

But Park Chae-seo says Hwang’s defection was a failure since it has done nothing but damage inter-Korean relations, and the South Korean spy agency didn’t want him to defect.

Hwang Jang-yop had been signaling his willingness to defect to the South but the ANSP had no interest, Park says. He wasn’t worth the fuss it would cause, it thought.

But Kim Hyun-cheol, son of then incumbent President Kim Young-sam, and nicknamed “little President”, chipped in. Kim had senior ANSP officials in his inner circle set out to intercept Hwang and blow another wind from the North.

5. Hyundai was behind the spy operation leak?

In 1998, Kim Dae-jung was finally elected President against all odds. The manipulation operations of Kwon Young-hae, ANSP director, had come up short.

Fearing consequences, Park says that Kwon ordered the head of North Korea operations to compile a thick file of ANSP documents, some of it genuine and the rest of it fake.

Kwon wanted to show the new administration that he could still damage its integrity. His blackmailing didn’t work either, however.

One of the five copies of the file was leaked to the Hankyoreh, and the newspaper published a story based on it, without doing much fact-checking.

This is how Park’s secret operation, which had been very successful, was finally exposed. The Hankyoreh story describes his operation as being “under the guise of an advertising business.”

Later in the book, an ANSP colleague of Park who was then working for Samsung tells him a very interesting story.

Samsung had several major inter-Korean business projects underway. According to Park’s colleague, Hyundai was so concerned about this that it leaked the documents to Hankyoreh in order to sabotage Samsung’s efforts.

Whether or not this telling is true, it is the case that after Kim Dae-jung came to power Hyundai did manage to secure the lion’s share of the inter-Korean business projects. Though as we have seen from Mt Keumkang tourism, this era also marks the beginning of Hyundai’s decline.

6. Jang Song-thaek was concerned that NIS had tried to set him up

Park Chae-seo says he met Jang Song-thaek several times even after Park had been exposed. While he no longer worked for the ANSP, which was reorganized into the National Intelligence Service (NIS), Park still maintained lots of connections in China and North and South Korea.

When the two met in 2009, Park says, Jang told him that the currency reform happening at the time was another kind of power struggle and that even he had had no advance knowledge of it. There was practically no control over the military hard-liners, Jang said.

Jang thought the NIS has been intentionally leaking information to the hard-liners concerning corruption among Jang’s staff. Several South Korean reports after Jang’s execution suggest that the NIS had succeeded in setting him up.

7. Pyongyang sank ROKS Cheonan with the help of the Chinese navy

The sinking of the ROKS Cheonan in March 2010 is still a subject of controversy even with much evidence pointing to Pyongyang.

The big parenthesis that has to be filled was the motive and the how.

Inter-Korean relations were hardly in good shape as it was, but there were talks happening, including the secret meeting between President Lee Myung-bak’s chief of staff and North Korean spy master Kim Yang-gon.

According to the joint investigation report, one single shot of a North Korean torpedo would have been enough to sink the 1,200 tonne warship in the dark of the night. But were North Korean naval sensors sophisticated enough to do that?

Kim Dang and Park Chae-seo suggest that Kim Jong Il himself was unaware of the attack and that, unbeknownst to the Chinese state leadership, the North Korean navy had assistance from the Chinese navy.

Chinese leadership fumed over the Cheonan sinking. According to the book, the Sino-NK summit later in May 2010 was, far from what official media of both said, a kind of scolding session for Pyongyang.

Beijing felt its initiative to talk both Pyongyang and Washington into getting back to the six party talks had been ruined by the North’s aggression.

President Hu Jintao himself demanded an answer from Kim Jong Il as to why such a radical measure had to be taken during a crucial period.

Kim Jong Il allegedly told Hu he hadn’t known about the Cheonan sinking. Park and Kim Dang suggest KJI had no absolute control over the military and the military hardliners’ act of aggression may have been gilded as an accomplishment of military bravery against the puppet regime of the South.

Indeed, Jang Song-thaek told Park in person there was Chinese military support behind the Cheonan sinking.

“How could our submarine know where the Cheonan is in the darkest night and sink her with one torpedo shot? Our navy has no capability to do that without intelligence support from the Shenyang Military Region,” Jang told Park.

Unlike the militaries of most democratic countries, the militaries of the communist bloc enjoy autonomy at some level. In the case of China, there are seven military regions across its vast territory and Shenyang, which shares borders with North Korea, has a very close relationship with the North.