“Korean newspapers were found to have a much higher rate of dependence on male sources than American newspapers. The ratio of male to female sources in the US was 4.3 to 1. But in Korea, it was 9.9 to 1, which is twice as high.”

One wonders how Korean newspapers have changed over the last ten years. According to Statistics Korea, there were 25,656,000 women in Korea in 2017, which accounted for 49.9% of the population. However, a majority of newspaper articles still overwhelmingly cite male sources. Media Today researched the articles written with real-name sources on pages one to 16 of Chosun Ilbo, JoongAng Ilbo, and Hankyoreh over a period of five days, from July 2 to July 6.

Over the five days, we counted 151 sources from Chosun Ilbo, 170 from JoongAng Ilbo, and 152 from Hankyoreh. The investigation excluded anonymous sources, as it was not possible to confirm the sex of such sources, and duplicate names were counted as single sources.

Why are we getting these numbers? According to a woman journalist from one of the daily newspapers investigated for the purpose of this article, “Most of the high-ranking sources in politics and government offices who can use their real names for articles are male. A lot of female sources are low ranking and therefore uncomfortable using their real names for articles.” She added, “Female sources who use their real names are usually from the Ministry of Family and Gender Equality and other women’s groups working on women’s policy issues.” In light of this, we can presume that there is a higher percentage of men among anonymous sources too.

According to Statistics Korea, women accounted for 37.8% of the workforce and 20.1% of management positions in 2016. The percentage of women elected to the National Assembly was 17% in 2016. The percentage of women in civil service was 44.6% in 2015. From this, we can see that most women are in low-ranking positions and more men are in high-ranking positions.

The same is true for the press. The highest-ranking eight members of the Korea Communications Commission, including the chairperson, are male. Most of the presidents of journalism schools and most of the leaders of civil press societies are male. Only one of the ten members of the Foundation for Broadcast Culture, the majority shareholder of MBC, is female. Of the 11 members of KBS’s board of directors, only one is female. According to the industry survey conducted by the Korea Press Foundation last year, the percentage of women in the press was 42.8%, but women made up only 3% of the executives.

Perhaps for the same reason, the majority of sources we use at Media Today are male. We looked at the 1155th to 1157th editions of our weekly newspaper, from pages 1 to 16. Of the 147 sources that were cited in the articles, 111 were male and 36 were female. Only 24.5% were female.

What types of women were cited as sources for articles? For Hankyoreh, they included cosmetics industry employees, a Green Party candidate, the president of Korean WomenLink, and early childhood professionals. Chosun Ilbo had six female sources who were non-expert citizens. Among JoongAng Ilbo’s female sources were a gastroenterology professor and a violinist. Male sources were much more diverse: professors, CEOs, spokesmen, ministers, assemblymen, and researchers.

Secretary General Kim Eon-gyeong of the Citizen’s Coalition for Democratic Media, on the overwhelming bias towards male sources for newspaper articles, regardless of their political leaning, said, “Sources are usually from expert groups. The newspapers reflect the fact that, in our society, the number of women in positions of high expertise is low.” She continued, “Reporters are probably not trying to single out male sources.” 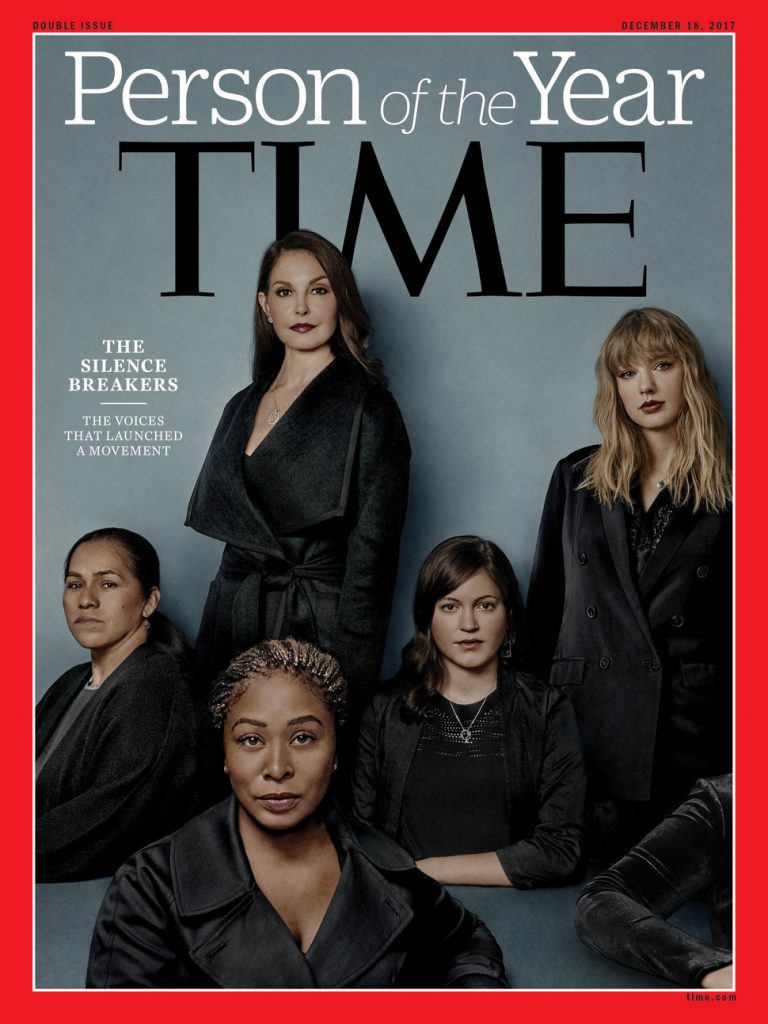 Time, America’s weekly newsmagazine, selected the women of the “Me Too” movement as 2017’s People of the Year | AFP Photo / TIME inc.

Former reporter for Kyunghyang Shinmun and current journalism professor at Semyung University Journalism School, Jae Jeong-im, said, “When reporters look for expert opinions on a daily basis, they return to their easily accessible sources, and these sources are likely to be male sources with good reputations.” She added, ”[These statistics] show that women are still a minority among the experts in our society, but they also shows the laziness of the reporters.”

Therefore, reporters need to try harder. “Reporters have to be more intentional in breaking this abnormal structure,” Kim Eon-gyeong suggested. “They have to do the legwork to find new and diverse sources,” added Professor Jae Jeong-im. “They have to intentionally try as much as possible to seek out stories from female experts. Then the articles will be far more rounded.”

In this aspect, The New York Times Gender Initiative, which received some attention during the #MeToo movement, has a strong message for the Korean press. The NYT has three big goals: pursue gender equality in article content, increase female readership, and increase female participation in the newsroom. According to the “Korea’s Journalists 2017” report by the Korea Press Foundation, women only account for 24.7% of journalists in the press, with 33.6% at daily newspapers. The flow of women into editors’ offices, the rise in women sources, and the ever stronger woman’s voice is a tide that cannot be stopped.

JUNG Cheol-un  has been investigating media issues since 2010. He is the author of Park Geun-hye Destroyed, Sohn Suk-hee Journalism, and Joseph Goebbels.

LEE So-hyeon  is a student reporter at Media Today.