Ding dong, impeached is Park. So what happens next? The election, of course. Since we don’t have a president anymore.

According to the constitution, there has to be an election within 60 days of the premature exit of a president. May 9th is the most likely date, in light of various circumstances.

Moon Jae-in, the leading opposition candidate, looks set to win. He’s beating Ahn Hee-jung, the second most popular candidate, by a factor of two in a recent poll.

It is hard to imagine this trend suddenly reversing itself within 60 days. However, the road to the Blue House for Moon is paved with potholes. Some of the bumps might quickly prove harmful to his lead.

The Terminal High Altitude Area Defense issue represents his biggest risk. In case you don’t recall, the deployment of the ballistic missile interceptor system was one of the foremost security policies of the outgoing Park administration. It aimed to counter the nuclear threat from the North.

China was particularly unhappy. Beijing has been vehemently against the THAAD deployment, arguing that it would harm regional stability. In other words, Beijing won’t tolerate a US missile defense system—with a long range radar capable of sweeping Chinese airspace—on Korean soil.

Beijing was unable, however, to prevent Seoul from reaching an agreement with Washington. In the aftermath of the North’s fourth nuclear test and long-range rocket launch in early 2016, they agreed to deploy a THAAD battery in a United States Korea base last July.

Big boy doesn’t just talk loud. In a crude display of power, Beijing ordered the cessation of imports of Korean goods and the sale of tickets to Korea. While Beijing was denying the existence of such an order, the order dealt the South Korean economy a huge blow.

Major cosmetic and entertainment stocks plummeted in price. A research arm of a Korean bank estimated the total loss to the South Korean economy as being as high as $15 billion.

South Korean liberals, with a political orientation nurtured by nationalism and anti-Americanism during the democratization movement, thus have one more reason to oppose the THAAD deployment.

The opposing Minjoo Party and People’s Party were both against it from the start but the positions of the candidates have diverged since Seoul’s decision on unprecedentedly fast deployment. For example, second placed Ahn Hee-jung now argues that there is no way to reverse an agreement between the two governments.

Moon, however, has been quite consistent in his objections to THAAD. Since the passage of the impeachment bill by the Assembly last December, he has maintained that the issue of THAAD deployment should be addressed by the next president.

The sudden arrival of THAAD battery components on March 6, as if a reply to Moon from the two governments, did not change his mind. 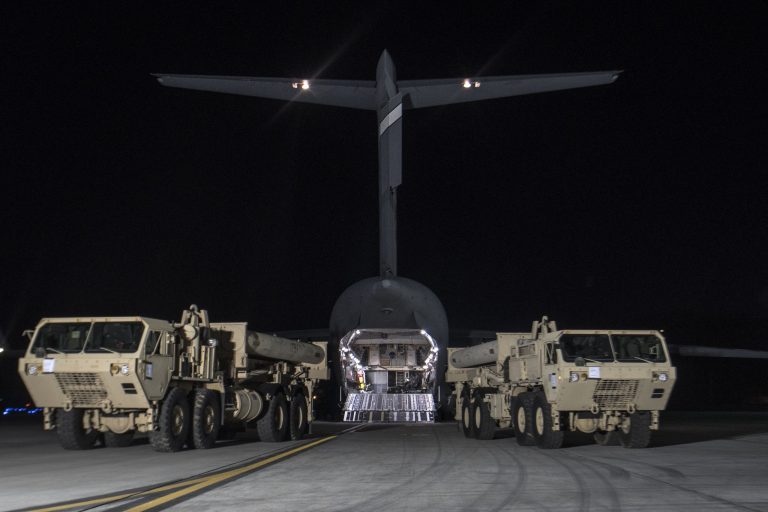 Beijing will push Seoul harder for a meaningful compromise on the THAAD issue. It is well aware of what Korea thinks and even admitted to oppressing imports of Korean cultural products when a pack of Minjoo party lawmakers visited Beijing after the impeachment bill.

That the favorite candidate still thinks he can alter the course of THAAD deployment may further embolden Beijing. China will seek to raise the volume on unofficial channels such as popular anti-Koreanism.

In other words, THAAD looks likely to eat up the whole election campaign. And this is the best the conservatives, on the brink of extinction, could hope for.

Because national security issues have never been Moon’s strong suit.

Although he served his country in a special forces unit, which is quite rare for a politician of his generation, Moon failed to make a good impression on the electorate during the last election in regards to national security.

How Moon dealt with the issue of the Northern Limit Line in the 2012 election is a case in point. The Park campaign attacked the late President Roh Moo-hyun, Moon’s political mentor and a great source of supporters for him even now, on the grounds that Roh had tried to “sell off sovereignty to Kim Jong Il” during the NLL negotiation in 2007.

Long story short, the accusation turned out to be erroneous but very effective. Moon had the resources to refute the claim and even set out a counter-attack right from the beginning but was ultimately unsuccessful.[1] His failure to address the NLL issue was a major cause of his defeat in the 2012 election.

In the South Korean political climate, to win the presidency is to win undecided voters. While they feel empathy for North Koreans, they also fear the Northern threat. This is where most liberal politicians, who are used to being criticised for being jongpuk[2], fail.

Moon’s seeming reluctance on THAAD deployment might sow doubts in the electorate on his likely response to the North’s threat. Writing as an air defense officer in the reserve Air Force, it’s hard to say that a single THAAD battery would be enough for a ballistic missile with a nuclear warhead. However, reluctance might lead to a conservative attack on Moon for being pro-North.

It gets more complicated when put in the context of the US-ROK security alliance. The Korean conservatives, and many of the undecided, take the alliance seriously. Moon’s objection to THAAD might be seen as an example of his anti-Americanism.

Better yet, the timely profile of him in the New York Times shed light on his yearning for national independence from American influences:

Mr. Moon has called himself “America’s friend,”… But he also said South Korea should learn to “say ‘No’ to the Americans.”

Washington had already been quite wary of the possibility of a liberal president and the NYT piece won’t alleviate its concern.

Over the next 60 days, national security issues including THAAD and the US-ROK alliance will keep hindering Moon. While the polls point to a high chance of a Moon win, how he handles himself in the face of today’s security issues may play out as the NLL issue did in 2012.