A still from the film Microhabitat. It was released in Korea as 소공녀, meaning 'a little princess' | Gwanghwamun Cinema

In the days when the song Home, Sweet Home symbolized the ideal home, many families lined their shelves with large collections of classic children’s books. Among those foreign works, there often were two or three by Frances Hodgson Burnett—A Little Princess, Little Lord Fauntleroy, and the The Secret Garden. These are familiar titles to those now entering their middle or old age.

While the settings and the narratives differed, these novels shared the same theme. A boy or a girl in difficulty stay strong and true to themselves in the face of cruel treatment and eventually find a happy ending. One is a story about Cedric, who lives with his mother in the United States before going to live with his British aristocrat grandfather, while another concerns a rich girl who becomes destitute overnight and is forced to live in the attic when her father goes bankrupt and passes away.

The boy and girl undergo a crisis and lose their ‘happy home’, symbolic of home or ‘Home Sweet Home’. In A Little Princess, Sara only has her father, but it was possible for her to be treated like a princess at her boarding school because of the success of his business in India. Yet when her father goes missing after his business folds, she loses everything overnight and becomes penniless and homeless. At the boarding school, her status changes from a “princess” to an errand girl. Yet she endures the difficulties of hunger and loneliness using her imagination. And one night her imagination turns into reality. These stories always come to a happy ending with economic compensation for the happiness they’d been deprived of.

The stories of bright and warmhearted boys and girls who overcome hardships disappeared from children’s classics with the passage of time. The fortunate happy ending for Sara, who was treated like a princess for a little while thanks to her father’s success in the British colony of India, can no longer be praised the way it once was. Even the anachronistic “princess” in the title[1] has become an object of repulsion. No longer can a lucky little princess exist, and no longer do people want to be princesses.

But another little princess has appeared in 2018. She has never had a rich father or been treated as a princess. And while Sara is kicked out of her room at the boarding school and comes to live in an attic, this little princess loses her tiny rented room yet continues to dream.

What will you give up 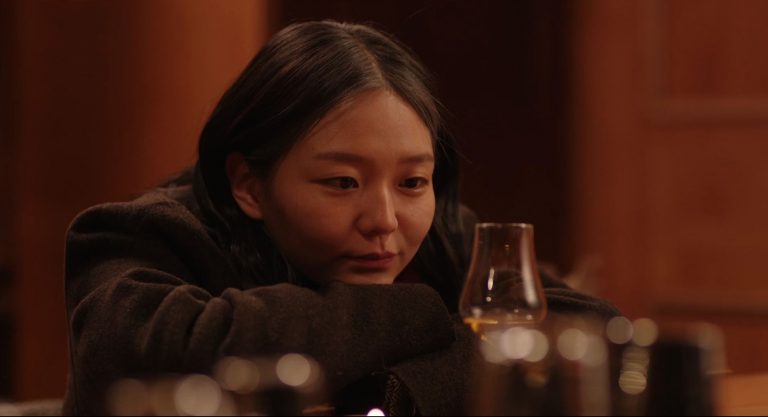 There is a girl named Miso (played by Esom). In her late twenties or early thirties. The heroine of this film and a self-described housekeeper. Miso lives in a tiny one-room apartment accessible only by steep stairs on the outside of the building. It’s a sublet, leased by a tenant who has rented the apartment from the owner. There isn’t a hint of warmth in the room—after taking off a couple of layers, she postpones sex with her boyfriend until the coming spring. Her boyfriend Hansol (played by Ahn Jae-hong) lives in employee housing provided by his company and barely scrapes by, spending most of his wage on repaying student loans.

Without even a shadow of a family, Miso lives a busy life, constantly drinking herbal medicine to stop her hair from prematurely graying. And she works as a housekeeper to make enough money for a shot of whiskey and a pack of cigarettes. Others skeptically ask “You’re a housekeeper?” but she takes her work seriously, using professional cleaning tools and making all kinds of side dishes, anything her clients ask for.

But she’s only professional when she’s working; when she returns to her life, she still looks like an amateur city dweller. In fact, she has no intention to live the kind of life that the city wants to force her into. When the price of cigarettes rises, she doesn’t quit smoking but instead looks for a cheaper pack. When the price of whiskey increases and her rent goes up, instead of giving up her shot of whiskey, she gives up her room. And so starts her journey of going around asking former members of her music band, who used to treat her home as theirs, to take her in for a little while. 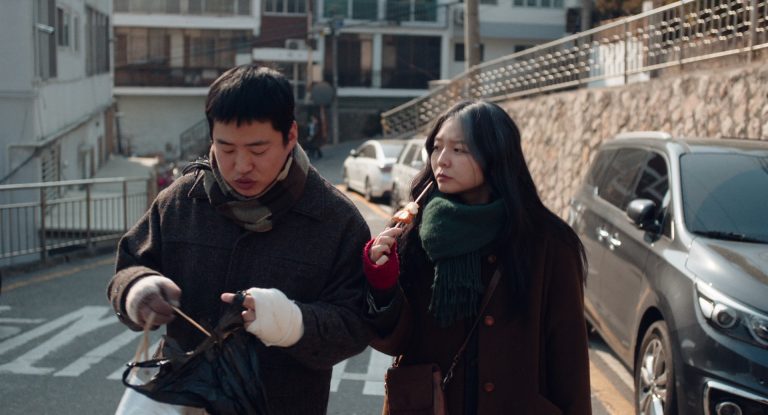 After giving up her room for a shot of whiskey and a pack of cigarettes, Miso ends up on the streets with a suitcase full of possessions. Through Miso’s journey, the film paradoxically questions the meaning of ‘housing’. Having a home and remaining in it are the basic conditions of survival in our society. That’s why terms such as ‘Sampo‘ generation (the generation of people who has to give up three things—love, marriage, and babies) are coined to remonstrate against the tribulations of today’s youth who have difficulty buying even a tiny apartment.

The film adds depth to the housing question in this time of youths who cannot have a home—the meaning of a shot of whiskey, a luxury to some people, and a pack of cigarettes, which does more harm than good. The former band members comment, “You’re still smoking?” or “You still haven’t grown up”. Through the respect for Miso’s luxurious and useless preferences, this film asks us why we need a home.

And in order to add depth to such questions, the film compares Miso with the former band members who have homes. They were all friends who had at one point enjoyed whiskey shots and cigarettes too; they’d all shared a love of music and friendship. Yet they are now living as “mature adults” in this society. And they all have their own homes. 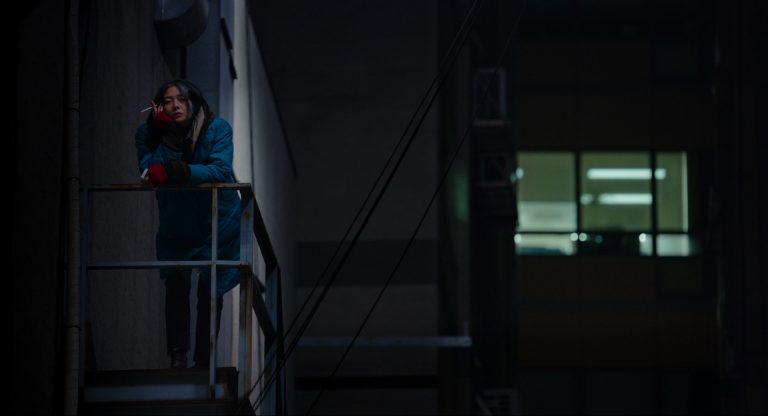 Her friend who works at a company and makes good money overcomes her exhaustion from work with intravenous injections. Another friend who paid a monthly rent of a million won for twenty years and finally bought an apartment to get married ends up alone and mired in debt. He receives consolation from Miso instead of the other way around. Another friend who married early has a house but lives with her in-laws and can’t even put Miso up for a night without asking permission. And her house has no place for music, even though she’d been good at composing when she was younger.

Miso stays with a friend whose house has more than twenty rooms and a high brick fence. But there, the shadow of the husband she needs to wait on looms at all times. Another friend, who used to be a singer, sings Miso Home, Sweet Home with his family, but all that remains afterward is the compulsion to confine her. And the film begs the question: are there homes of more worth than Miso’s shot of whiskey and pack of cigarettes?

The film uses Miso’s journey through the houses of the former members of the band to question the value of life that is measured in the economic value of “housing”. Society says everyone needs housing. But what is housing for? And what did you give up for your house? Are the things that you gave up to become an adult and purchase a home really worth giving up on? A Little Princess asks ‘foolish’ questions of the youth of this era who yearn to be included. This is another discourse on sohwakhaeng (small but definite happiness) which has trended in recent years. 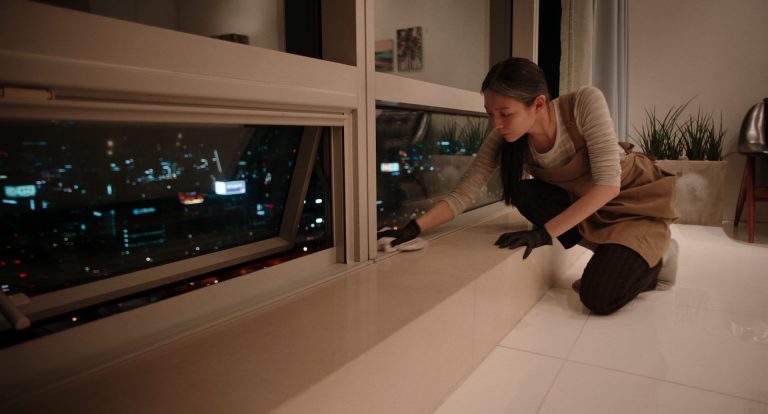 But there are no wise answers to those questions. Miso says she’s fine if she has whiskey, cigarettes, and her lover by her side. But her boyfriend Hansol has to donate blood for free movie tickets to see a film in a cinema. He decides to endure his lover’s poverty by giving up on his dream of becoming a web cartoonist. In order to earn enough money to purchase a “sweet home” for the two of them, Hansol leaves for Saudi Arabia, where the pay is three times higher. In a world where dreams are postponed or given up on for a home, Miso now finds it difficult to afford the herbal medicine she’d been drinking to prevent her hair from graying.

With her grayed hair blowing in the wind, Miso remains on the streets. Darkness falls on the city, and a light comes on in Miso’s tent by the river. Miso’s sohwakhaeng is as rebellious and distant as her illegal tent. The Korean title of the film is A Little Princess but the English title is Microhabitat. The film begins as a story about a girl who lost her home but eventually uses this neologism to ask a question.[2]

In her book The Geniuses of Private Life[3], Jeong Hye-yun discusses microhabitats: “A place like the underneath of the eaves where you can take shelter from rain, space enough for a worm, a bird, a cat… even a human needs a place to stop for a rest in this city.” A question about a space which micro-Miso can inhabit. To a generation who, cannot afford to invest in housing, unlike the generation before it, housing becomes the smallest “space” to inhabit.

Microhabitat tells this story about “changed habitat” through an actress named Esom. It’s the female version King of Jokgu, another film, and is directed by Jeon Go-woon, that film’s producer.

LEE Jung-hee  is an award-winning media critic. She has written for magazines such as Art View and is currently a citizen reporter for OhmyNews and a blogger for Mediaus. You can reach her at 5252-jh@hanmail.net.