Will Netflix be able to break through in South Korea? The controversy surrounding the release of Okja in theaters sparked a heated debate in the first half of 2017. Tension has been building between Netflix and Korea’s large cinema chains—led by CGV—surrounding the film’s simultaneous release on the online streaming giant and in local theaters.

CGV has staunchly maintained its position against the simultaneous release, even suggesting a willingness to boycott the film. Experts in the Korean film industry have continued to express their concern and criticisms regarding CGV’s stance through today, June 7. Whatever the results of the negotiations regarding the release of Okja on June 29, this controversy will bring about a huge change in the Korean film industry.

Experts in the field were divided, with some arguing that this would “disturb the film distribution system” and others asserting that it “does not seem problematic”.

“CGV’s behavior is a serious infringement of viewers’ rights”

On June 5, Seoul Art Cinema’s programmer Kim Sungwook took to social media and commented that he found it “difficult to understand a few of the arguments put forth by CGV regarding the release of Okja,” pointing to CGV’s assertion that the simultaneous release would “disturb the [film] distribution system”. Regarding the National Federation of French Cinemas’ objection to the screening of Okja in competition at the 70th Cannes International Film Festival, Kim explained, “In France, a certain percentage of box office earnings (and DVD, VOD, and streaming service earnings) are paid into the domestic film industry. It is difficult [for the French] to simply allow works that have not paid their dues or are not in accordance with the French law.” 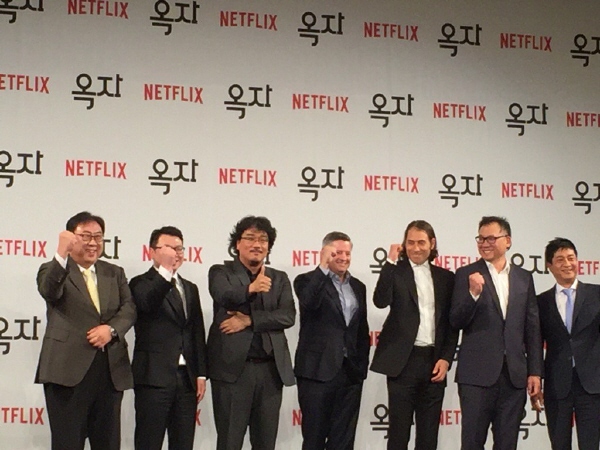 Netflix announced the release date and method in May at a press conference in Seoul.

“The aim of the Cannes Film Festival is to protect and foster the development of film culture,” Kim added. “It also provides an opportunity for new films from across the world to be promoted and sold overseas. Therefore it is questionable whether Netflix films, which are not released in theaters, are in line with the festival’s mission. It does not seem healthy that only Netflix, which provided a platform for the film, benefits from this situation. It is also dangerous for them to strengthen their market power when the system has yet to be fully structured.”

Stating “I believe we need to consider the rights of the Korean audience who are not guaranteed the opportunity to watch and appreciate a promising work of a Korean filmmaker in theaters”, Kim then pointed out that “the assertion put forth by CGV and certain other people seems illogical.” The gist of his argument centered on the boycott infringing on the audience’s right to choose the films they watch.

“Their point is a tangent to the problem that arose at the Cannes Film Festival. Unlike in other countries, Okja will be released in theaters in Korea (albeit simultaneously released on Netflix). And more importantly, contrary to the claims of CGV and other representative voices in the industry that this “disturbs the distribution system”, there is no comparable protective system in Korea that conflicts with Netflix’s policy. They claim that there is a “custom” in the industry, but it is impossible to believe those who talk about a “custom” instead of a system. Their practices led to the current market distortion. I’m not saying that what the French are doing is great. My point is that we need an appropriate system based on the difference between theater releases and streaming services. Film policy should be centered on ways to make films available to the audience through a variety of outlets.

“CGV and other multiplex chains’ decision to deny the audience the opportunity to watch Okja in theaters is a serious issue. What we must not disregard in this conversation is the audience’s right to watch films in theaters. I’m not arguing that theaters must screen all films or that all films must be watched in theaters. That is simply not viable, and there is no reason to argue for it. I’m only saying that, just as people read paper books, view art in art museums, and listen to music in concert halls, theaters need to continue showing films so that the audience can continue to watch films. But the problem is that unless they screen films, we cannot watch them.” — Kim Sungwook, Seoul Art Cinema

“We already have a Standard Guideline for Exhibition Contracts”

Choi Hyun-yong, the director of the Strategy Center for the Korean Film Industry[1], refuted Kim’s argument. Choi commented on Kim’s post, “I don’t quite agree. We can apply France’s case… to Korea.” His argument centered on the Standard Guideline for Exhibition Contracts[2].

“The internal agreement reached by the Korean film industry including multiplex chains and the position of the Ministry of Culture, Sports and Tourism, which is a public organization, are stated in the standard guideline for exhibition contracts,” asserted Choi. “The theaters’ refusal to screen Okja is plausible and appropriate in the modern industrial system.” In other words, Choi argued that the “custom” was already instituted into the system.

“The standard guideline stipulates that films, upon release, must be shown for on at least one screen for a minimum of one week . This minimum condition is a provision for the distributors [of films that are released]. It may seem discriminatory to the distributors of films that are released, but for theaters that meet the minimum condition, it also provides the incentive of a week of monopoly on screening. Therefore releasing films to be streamed on IPTV and Netflix a week after the theater release is a custom, an agreement, and a standard contractual provision recognized by the Ministry of Culture, Sports and Tourism and the Fair Trade Commission. Trampling on this as a mere custom is the same as trampling on the system of the Korean film industry.” — Choi Hyun-yong, Strategy Center for the Korean Film Industry

On June 2, Jung Sangjin, the president of Atnine Film, a film importer and distributor, and Art Nine, an independent film cinema, asserted that theaters “must come to an agreement on their position” and “boycott Netflix, not Okja”. “If certain theaters screen Okja while others don’t, in the worst case scenario it will only create more contention,” he commented. “In that case, Netflix will ultimately win. Even if [the boycott] violates the audience’s right to view films, we need to explain the current situation and voice concerns about the film industry.”

Yet programmer Kim Sungwook argued, “[That] criticism puts blame on the wrong shoulders. The problem is not Netflix but [Korea’s] lax industrial structure, distribution system, and the dominance of conglomerates in theaters. Multiplex chains customarily let a few films monopolize the theaters while refusing to guarantee the minimum screening opportunity for others. And now they are saying that they won’t screen a film that would be distributed in a certain way because of their ‘customs’.”

All of the experts above are concerned about a healthy and sustainable model for the film industry. Their divergent opinions on the Okja controversy reflect the gravity of the situation. What kind of decision will multiplex chains and Netflix come to in the end? More people than expected are concerned.