Tension in the Korean peninsula is nothing new but the mix of causes changes every week. With the advent of the Trump administration, uncertainty has reached unprecedented heights—especially regarding the US. With rumors of a preemptive strike against North Korea circling the media, the South Korean public has become wary of additional uncertainties that they previously didn’t have to take account of.

We at The Dissolve thought it would be helpful for readers to understand each candidates’ thoughts on this issue through their own words, not through someone else’s interpretation of them. Over the rest of this week, we’ll introduce more of what the candidates themselves had to say on specific topics in the five other presidential debates.

National security was foremost indeed but it wasn’t the only topic in the first debate. Candidates discuss the labor reforms put forward by Sim Sang-jung of the Justice Party. Challenges from the leading Minjoo Party candidate Moon Jae-in and the conservative Hong Joon-pyo reveal the differences in each candidate’s approach to employment issues.

Moderator: There has recently been talk of the possibility of military conflict on the Korean Peninsula. Of course, it must not happen and the possibility isn’t very high. But if North Korea becomes increasingly provocative and the United States decides to launch a military strike against North Korea, how would you respond to this situation? Please list three actions you would take in order of priority.

Hong Joon-pyo: First, the most important thing would be to negotiate with the US to prevent a preemptive strike. And also with China. Second, if a preemptive strike does occur, I believe the Korean military should be put on full alert and prepare for combat. Third, I would immediately implement operations to reclaim the Northern territory.

Ahn Cheol-soo: First I would call the president of the US and the president of China. I would tell US President Trump, who is also a Wharton School alumnus, that the war must never happen. And I would tell Chinese President Xi Jinping to put pressure on North Korea. Then I would issue an official statement saying that North Korea should immediately stop provocations. Moreover, I would thoroughly strengthen our military readiness. 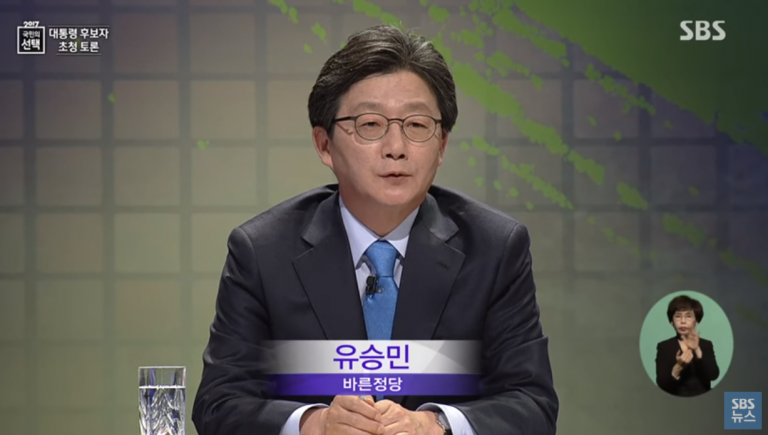 Yoo Seong-min: A preemptive strike is a precautionary, defensive measure taken when a North Korean attack on the South seems imminent. It needs to be closely coordinated between South Korea and the US, and that’s why it’s essential that a president who emphasizes security be elected through this presidential election. If a preemptive strike is to be launched, it must be preceded by sufficient cooperation and complete military preparation. Our military preparation must be sufficient. [A preemptive strike] must be avoided as far as possible.

Sim Sang-jung: First, I would issue a special presidential statement. Military action on the Korean Peninsula must not happen under any circumstance. Second, I would speak to the leaders of the US and China on the phone. If necessary, I would send an emissary to express the principle of peace on the Korean Peninsula. And I would operate a military emergency system.

Moon Jae-in: First, I would call the US president to clarify that the US should not launch a unilateral preemptive strike without our consent and put it on hold. Then, I would issue emergency orders to the entire military and activate the national emergency system. I would promptly contact North Korea through various channels including a hotline and ask them to immediately stop any provocation that could serve as a pretext for a preemptive strike by the US, and I would cooperate with China in the process.

Moon Jae-in: Do you agree on creating jobs through reducing work hours?

Moon Jae-in: Do you think new legislation is necessary to that end?

Sim Sang-jung: Not only new legislation, since new legislation must be instituted, but regarding the labor issue, the president’s strong resolve is necessary. I’ve been on the Environment and Labor Committee, but there’s nothing the Minister of [Employment and] Labor can do. He can do nothing more than manage the labor force for chaebol. What we need is to put [labor] on the top of the list of priorities for the government administration.

Moon Jae-in: According to the current law, legal working hours are 40 hours a week, 52 hours including overtime work. Wouldn’t complying with this law be enough?

Moon Jae-in: It’s 40 hours, and 52 including overtime work. Until now, the Ministry of Labor has made an administrative mess, excluding Saturday, Sunday and holidays from a week. Just [correcting] this would limit maximum working hours to 52 hours a week in total, basically 40 hours a week. I believe we would be able to create jobs just by changing that. Ms. Sim is also for including lunchtime in working hours, but I think that’s something we need to address afterwards. 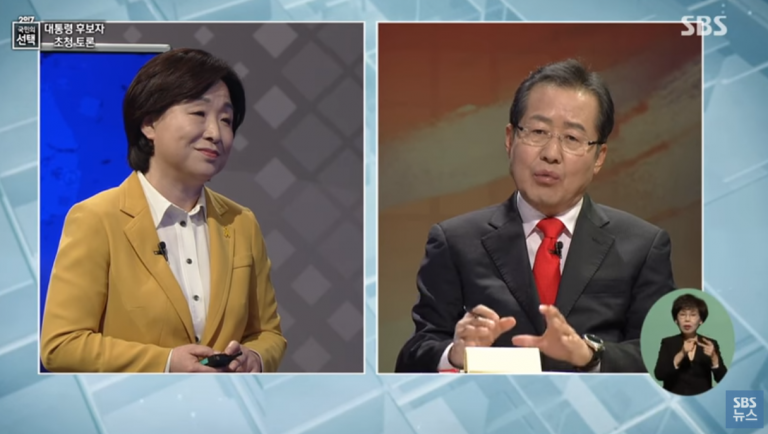 Hong Joon-pyo: I don’t think that’s the crux of the issue. If we treat companies, which make jobs, as criminals and thieves like that, would companies create jobs in Korea? They will go overseas. What’s your answer to that?

Sim Sang-jung: Arrest at Samsung is an opportunity for South Korea. These aren’t my words—they’re from the prominent and prestigious economic journal, The Financial Times.[1] Some say we are inciting anti-corporate sentiment, but the real culprits creating anti-corporate sentiment are collusion between the government and businesses, polarization, chaebol families performing illegal activities, and corrupted power, like former President Park Geun-hye who colluded with them.

The Dissolve is publishing extracts from all six presidential debates.

The Korean transcript for this first debate is at The Kyunghyang Shinmun.