The major candidates of this presidential election cover quite a balanced ideological spectrum—from Sim Sang-jung on the far left (though it is hard to call her far left in the Western sense) to Hong Joon-pyo on the far right.

The existence of social democrats like Sim has served, in a way, to keep the centrist liberal candidate, Moon this time, from going too far right.

Sim herself understands this well. “To strengthen the left of Moon Jae-in, not the right, is a shortcut to Korean democracy,” Sim said in her campaign tour last Saturday. Her criticism (in this final debate and elsewhere) of Moon’s pledges for not being left enough is no big surprise.

What’s more interesting this election cycle is the existence of a centrist conservative, or a “rational conservative”, as Yoo Seong-min describes himself. Having served as chair of the Assembly’s National Defense Committee, the assemblyman in his fourth term with a Ph.D. in economics is well versed in the state’s two pillars: national security and economy.

One might even say that Yoo is a conservative in national security but a liberal in economics. But you can decide for yourself as you read the fiery back and forth between Hong and him below.

Though his chances of winning this presidency are marginal, it will be interesting to see if Yoo goes on to keep offering conservative voters a different choice.

Yoo and Hong on labor regulations and welfare 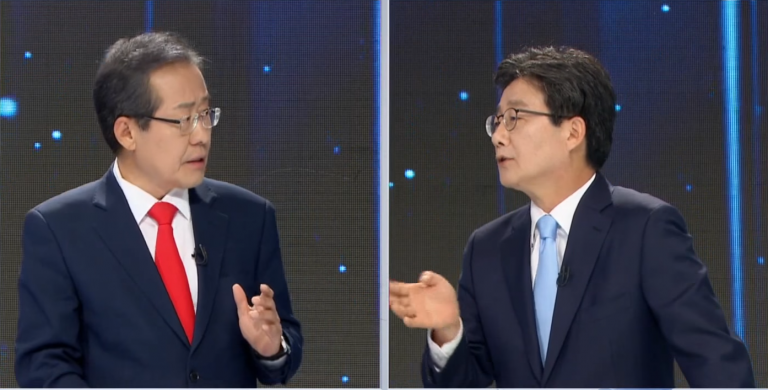 Hong Joon-pyo and Yoo Seong-min at the final presidential debate, May 2 / SBS

Yoo Seong-min: There was an accident at Samsung Heavy Industries. A lot of contractors, subcontractors, and non-regular workers are put into extremely dangerous work. At the Samgsung shipyard in Geoje, six people were killed and 25 were injured. The issue of non-regular workers is related not only to wages and welfare but also to life and safety. If you really want to give opportunities to the common people, you have to have a basic policy for non-regular workers. That’s why I came up with the policies to adopt a non-regular worker quota system and to prohibit conglomerates and public institutions from hiring non-regular workers for regular jobs, the ones where they need to be working at all times. Do you agree?

Hong Joon-pyo: I think the crux of the non-regular worker and regular-worker issue is not in the wages but in labor flexibility.

Yoo Seong-min: You talk as if the non-regular worker problem will be solved if [companies] can terminate people easily.

Hong Joon-pyo: That was how Germany’s Schroder lowered unemployment rate to 3.4%. I agree with your opinion. I agree overall, but that’s not the fundamental way to solve the non-regular worker issue. If we want to resolve this problem in the way Schroder did in Germany, we have to provide [companies] labor flexibility and give companies tax incentives for hiring regular workers. That way, we can discourage them from hiring non-regular workers as much as possible. Look at what happened with Kia Motors labor union. They used their vested rights and heartlessly kicked out non-regular workers [from the union]. That was terrible violence committed by militant aristocratic labor unions. [With your policies] there’s no way for us to prohibit discrimination against non-regular workers.

Yoo Seong-min: It was really wrong for Kia Motors to exclude non-regular workers from the labor union. That was a wrong action taken by an aristocratic labor union, and the Metal Union[1] apologized for that. What you said about Schroder, and also thinking about Thatcher, I do understand improving labor flexibility to a certain extent. But you constantly talk about how things aren’t working out because of militant labor unions and say that these problems will be solved if we make it easier to terminate people. And I can’t see the resolve of a president who wants to address this really difficult and dangerous reality of non-regular workers. We gave incentives for the past ten years, but nothing changed regarding the non-regular worker problem.

Yoo Seong-min: For ten years, we gave a lot of incentives for equal pay for equal work.

Hong Joon-pyo: Equal pay for equal work is, in a sense, an excessive demand from the government. They made it difficult to fire [regular workers], so why would companies hire regular workers?

Yoo Seong-min: There are also child benefit and maternity benefit. We give 10 million won for the second child and cover university education for the third child. And doubling child benefit. That’s for infants, a few months old or a year old, who are being raised at home. I promised to double the benefit. Do we give these child and maternity benefits to everyone, regardless of whether they’re poor or rich?

Hong Joon-pyo: I asked them to review that. In our party, we came up with it to address the demographic cliff, so this needs to be beyond the concept of whether it is selective welfare or universal welfare.

Hong Joon-pyo: That’s right. We shouldn’t give it [to the rich]. That’s my philosophy.

Yoo Seong-min: But in your pledge, it says you’ll give them [these benefits].

Hong Joon-pyo: That’s why I ordered my policy advisor and experts to review it, because we’re doing it for the demographic cliff, to resolve that, so I told them to go with universal welfare.

Yoo Seong-min: Mr. Hong. If the ends are very unequal, opportunities are also unequal. Do you agree?

Yoo Seong-min: Right? So then, when you say you’ll give opportunities to the common people, wouldn’t we be able to put them on equal grounds when we structurally repair this unequal structure in our society?

Yoo Seong-min: What is it?

Hong Joon-pyo: Eradicating poverty, increasing the welfare pension for senior citizens? I’m more for jobs if possible [than welfare pension for senior citizens]. I want to revitalize businesses to create a lot of jobs, have the common people get a lot of jobs, and have the rich spend money to get the money circulating, and that way, you can get the country’s economy going.

Yoo Seong-min: That’s the typical neoliberalism of Thatcher in the UK and Reagan in the US. If you talk about the domestic economy that way and maintain that kind of thinking, then you can’t be a president who implements policies for the common people.

Sim and Moon on welfare 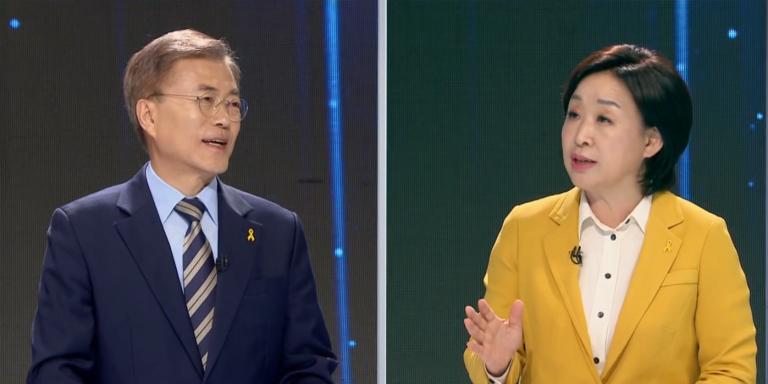 Sim Sang-jung: Mr. Moon. Let me paint a picture of our future. Right now, the Republic of Korea is one of the top 20 OECD economies. But the quality of our people’s lives is at the lowest level. We need a great shift on the national level. That’s why people held up the candles. In the next 20 years, I will make sure to bring quality of life and welfare up to the OECD average. That’s my vision for the welfare state. Mr. Moon, what are your visions and goals?

Moon Jae-in: I feel the same way about the long-term direction. But we can’t increase the tax drastically by 70 trillion won a year, as you stated in your welfare pledge. We have to approach it within the boundaries of financial resources we can [muster].

Sim Sang-jung: That means we should maintain the status quo. What are you detailed goals?

Moon Jae-in: I have no objection to [your] basic direction.

Sim Sang-jung: The program changes depending on your goals and visions. I said we’ll collect 70 trillion won per year and bring Korea up to OECD average, but since you’re saying that’s too much, I’d like to ask you this. [Korea] ranks in the top 20 OECD countries, but do our people not have the right to enjoy welfare at that level? In Europe, when GDP per capita reached 10,000 dollars, they laid the foundation for various welfare programs, such as free university education. We are at 27,000 dollars.

Moon Jae-in: You’re right. Welfare started in the Kim Dae-jung administration and was expanded in the Roh Moo-hyun administration. Then in the Lee Myung-bak and Park Geun-hye administrations, welfare went backwards for ten years. I have a lot I want to do, but because of financial limitations, I have no choice but to make pledges with what’s possible. No matter how many times I reviewed it, I think additional finances we can get would be around 180 trillion over five years. I want to do more, but it’s impossible.

Sim Sang-jung: That’s the difference between your vision and my vision. The central government and local government spends about 160 trillion won in total in social welfare. But since national welfare is unstable, people are spending over 200 trillion won for indemnity insurance and life insurance, for their life after retirement, for education, and for healthcare. It’s not because we don’t have the finances for welfare. People spend more and rely on unequal private insurance since the national welfare program is weak. If we can provide sufficient healthcare and welfare for senior citizens by cutting their burden on private insurance by half, then why would people oppose that? Chaebols, high-income groups, property owners who rent out their property, these wealthy people with a lot of money are worried. The “politics of vested rights” spoke for them and steered us away from a welfare state and turned Korea into Hell Joseon. You say that your thoughts on welfare are the same as mine, but they’re completely different.

Moon Jae-in: Just like you said, if we can direct the money that people spend on private insurance into welfare, we can expand [the budget for welfare] considerably. But in reality, we need to expand [the welfare budget] while revitalizing the economy. We can’t reduce the economy saying we are pressed for expanding welfare. The Justice Party can put forth an idealistic argument, but as a candidate who is promising to delegate power, I can’t pledge something that I cannot manage in reality.

Sim Sang-jung: It sounds as if you’re saying that you’d maintain the status quo when you delegate power. My vision is creating a just welfare state where people aren’t anxious about their future even if they don’t rely on private insurance, where people can rise again even after they fail. We have to work together to introduce this welfare state, where people would have better quality of life, to persuade people, and to put pressure on chaebols and the wealthy who need to take bigger social responsibility… There was no leader who was resolved to do those things, and that’s why Korea became Hell Joseon. I’m frustrated at why a lot of people now, why the elderly have to be the most poor group, why the Republic of Korea is becoming a place where people can’t have children. We have different visions for the nation and different governance philosophies, but you only talk about finances. That makes it difficult for the people to see the difference. I am the only person who was honest about finances. I’m analyzing each candidate’s pledges and financial sources. Mr. Moon, you said you’d like to [abolish] the obligatory support system, but the head of your policy headquarters said you’re only going to test it out.

Moon Jae-in: I mean to abolish it in phases. It would be great if we could abolish it all at once, but since that would take ten trillion won a year, I’m saying that I would do it in phases. Our [nation’s] welfare budget is increasing now, but the finances we laid out were new or additional resources. That’s over 35 trillion won every year, so how can we expand that to 40 trillion won, 70 trillion won?

The Dissolve has published extracts from all six presidential debates.

The Korean transcript for this sixth debate is at Yeonhap News.