On May 7, Sohn Suk-hee, JTBC Newsroom’s main anchor and the president of JTBC’s news reporting division, commented on the hunger strike of the floor leader of the Liberty Korea Party, Kim Sung-tae. The day after starting his strike, Kim had told a reporter:

Derision is the most difficult [to endure].[1]

Sohn pointed out the derision endured by the families of the Sewol victims at the time of the 2014 tragedy. This derision had come from the members of Kim’s own party (then named the Saenuri Party).

Sohn focused on two quotes, one of which came from Kim Tae-heum, a senior leader in the party. Speaking about family members who held a sit-in at the National Assembly, he had said: 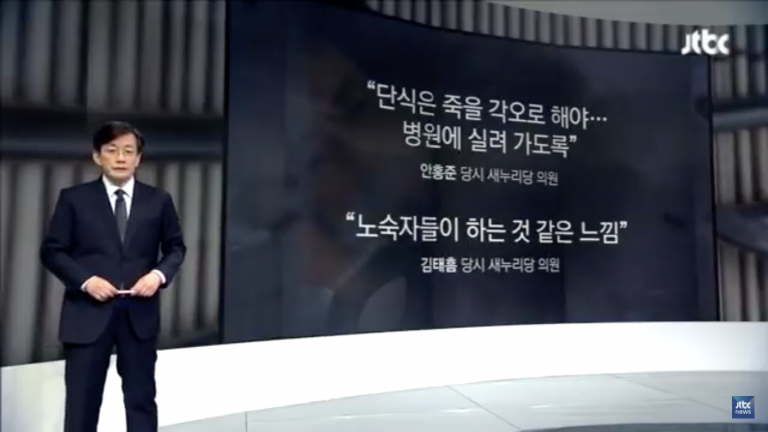 The following day, on May 8, Kim Tae-heum, held a press conference, stating that he intends to take legal measures against Sohn and JTBC to protect his reputation. He responded:

The anchor Sohn Suk-hee quoted me saying “It feels like homeless people [are holding a sit-in]”. I said this while pointing out that it was wrong for the Speaker of the National Assembly to permit the families of the Sewol victims to hold a sit-in at the main building of the National Assembly. This is the first time this has happened in the history of the Constitution of South Korea.[3]

In my conversation with the reporters after the general meeting of the Assembly on August 1, 2014, I said, “It is not desirable for the families of Sewol victims to hold a sit-in in front of the main building of the National Assembly. It’s like some homeless people…” This was an expression of sympathy for the families of Sewol victims who were having a difficult time under the scorching August sun.

I’d made the statement to point out that it was wrong for the Speaker of the Assembly to allow the families of the victims to hold a sit-in and suffer, because they had put up plastic tents to shield themselves from the sun and clotheslines to dry their laundry, like homeless people.”[4]

Interestingly, he neglected to mention something else he’d said in 2014:

It’s not desirable for [people] to come to the [National Assembly] whenever they feel wronged.[5]

From One Hunger Striker to Another

One of the hottest topics in South Korea right now is the Druking scandal. And that brings us back to the floor leader Kim Sung-tae. He went on a hunger strike from May 3–11, demanding that the Moon Jae-in administration appoint a special prosecutor.

Unfortunately for him, his hunger strike was met with the derision he mentioned above. On the Cheong Wa Dae website, some citizens petitioned for the installation of cameras in front of the National Assembly to make sure that Kim Sung-tae wasn’t eating anything. Others called for him to be removed from his position as an Assembly Member.

The harshest critique, however, came from Kim Young-oh, the father of a Sewol victim. In 2014, Kim Young-oh famously went on a hunger strike for 46 days. He wrote a Facebook post to Kim Sung-tae:

There are still five missing victims.

Four years have passed by and we still haven’t arrived at the truth.

What are you so afraid of that you hinder every step of the investigation of the Sewol tragedy but talk of desperation and go on a hunger strike for the Druking scandal?

Assembly Member Kim Sung-tae, you seemed as though you wouldn’t have blinked if I’d died during my hunger strike.

Who do you think is more desperate?

A parent who has lost his child or a politician?

“If I starve, truth is bound to be revealed”?

I went on a hunger strike for 46 days, but truth was nowhere in sight. Instead, the truth was hidden and manipulated, while I was belittled and ridiculed.

In all parts of the Republic of Korea, the socially disadvantaged go on hunger strikes to fight against your power or to ask you to hear their stories. But has anything been resolved?????

If you truly wish the best for the country, shouldn’t you reopen the National Assembly?[6]

On a lighter note, in Korea May 5 is not Cinco de Mayo but Children’s Day. Korean children are, unfortunately, known to slave away at schools and cram schools from morning till night. And their happiness level is one of the lowest among OECD countries.

To remedy this, some people, have been working to bring play back into children’s lives. One such ‘play activist’ is Pyeon Hae-mun, a playground designer and critic. At the 2018 International Forum on the Policy of Children’s Right to Play, jointly hosted by the Korean Committee for UNICEF and Seongbuk-gu, Pyeon said:

It’s already been three or four years since children’s right to play was first discussed in Korea. But we’re still at an ideological level. It’s time for us to act. We need to make real changes based on the discussions we’ve had at the forum.[7]