Chun’s death prompted comments from a number people. As soon as the news broke, Jo Oseop, a member of the National Assembly and the floor spokesperson for the Democratic Party of Korea posted on Facebook:

The murderer, Chun Doo-hwan, is dead.

Without revealing the truth about May 1980, without a word of reflection or apology, without receiving punishment, and continuing to distort the facts, he has died, and it makes my blood boil.

With the death of Chun Doo-hwan, the opportunity to reveal the truth about the helicopter shootings[1] through a trial is also lost.

Even after brutally slaughtering the people, murderer Chun Doo-hwan led a long and comfortable life. We must at least stop him from being honored with a state funeral just because he was a former president.

It is very regrettable that the State Funeral Act could not be amended before his death. We must not make a historic error by being swayed by the trickery of people like presidential candidate Yoon Seok-yeol, who revere Chun Doo-hwan as having left remarkable accomplishments. The issue is not about whether a state funeral for Chun Doo-hwan is possible. Rather, it is about making a judgment against a murderer who slaughtered the people of this country with guns and swords and a historical punishment for absolute evil.

Chun Doo-hwan is dead, but the truth cannot sleep forever.[2]

On the same day, Kim Gi-hyeon, a member of the National Assembly and the floor leader of the People Power Party, reacted to Chun’s death in an interview:

It’s unfortunate. He is a person who has caused many controversies in Korean history, and, whether we like it or not, he is a person who has been a major part of Korean history. He was also the central figure in a huge incident that has been criticized by many people, and I believe he bears a great responsibility for that. However, on a personal level, I am deeply saddened by his death.[3]

Lee Jun-seok, the leader of the People Power Party, also spoke about Chun’s death on a radio show. His comments were more critical than Kim’s, comparing Chun to Roh Tae-woo and expressing his disappointment that Chun had passed away without actually apologizing for his part in the suppression of the Gwangju Democratization Movement:

Recently, former President Roh Tae-woo also passed away. But, unlike his death, the death of former President Chun Doo-hwan must be regrettable for many people. Both men were agents of the December 12 military coup, and both were leaders with military backgrounds, occupying a very dark side of our society. However, in the case of former President Roh Tae-woo, he himself and his family—the lawyer Roh Jae-hyeon, Ms. Roh So-young, and his granddaughter Choi Min-jung—made a lot of effort to reflect on their family’s involvement in the dark history of Korea. [Choi] voluntarily served in the military in order to restore her grandfather’s honor. In contrast, in the case of former President Chun Doo-hwan, the trial about his memoir and other actions he took were not worthy of a former president, and so I was very disappointed. I am the party leader, so I will send flowers as the head of the party, but as an individual I have no plans to pay tribute or pay condolences to former President Chun Doo-hwan. As I see it, there is a contrast between the two former military presidents, who died within a month of each other.[4]

The Justice Party’s Yeo Yeong-gug also made a statement on Facebook about Chun’s death:

He is guilty even in death.

Chun Doo-hwan, a criminal who launched a military coup that violated the constitutional order, died before historical and judicial judgments could be made against him.

He was accused of defaming the late Father Cho Pius[5], and his death ahead of the trial on November 29 tells us that his ugly crimes of denying the historical truth until the very end of his life and neglecting judicial justice are ongoing crimes that did not end in May 1980.

Extreme conservative forces, such as candidate Yoon Seok-youl, who praises the military dictatorship of Chun Doo-hwan, have delayed history and justice by mocking the judicial verdicts and historical evaluations that condemned Chun. They are accomplices who have overlooked and condoned the crime of massacre.

In that sense, Chun Doo-hwan today is guilty even in death.[6]

I do not mourn. I will not pay condolences.

The only thing that comes to mind upon hearing about his death is anger at the very fact that he was at peace in life and in death, at that furious injustice.

Just this once, I hope that no one will try to divide the people under the guise of unity or the lies of public service.

Once again my heart of solidarity goes out to the bereaved families of the victims of the Gwangju massacre, whose hearts will be suffering in rage again today at this devastating news.[7] 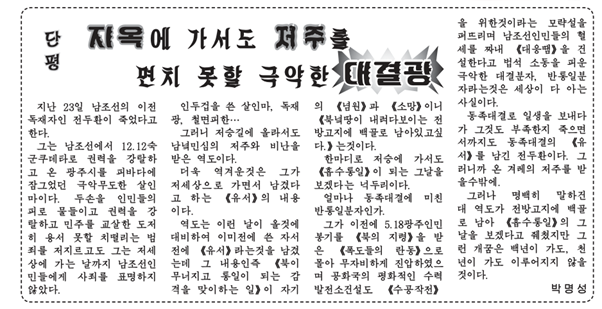 An extremely evil, competitive maniac who will not even avoid a curse in hell

On November 23, there was news of the death of Chun Doo-hwan, the former dictator of South Korea. He was a heinous murderer who usurped power in South Korea through the December 12 coup and submerged the entire city of Gwangju in a sea of blood. Even after committing the unforgivable and terrifying crimes of staining his hands with the blood of the people, usurping power and strangling democracy, he never expressed a word of apology to the people of South Korea until the day he left for the underworld.

A murderous, mad dictator with barefaced impudence in the guise of a human…

He was a traitorous man who will be cursed and criticized by the people of the South even in death.

What is more revolting is the content of the will he left upon his death. In preparation for the day of his death, this traitorous man left something like a will in the memoir he penned. In it, he said that his “greatest wish” and “hope” would be to “see the day the North collapses and the two Koreas become unified” and that he “wishes for his remains to be left in the highlands of the front lines where he can look down on the land of the North.”

In other words, he is saying that, even in death, he wants to see the day the North is absorbed into the South.

Surely he is an anti-unification madman obsessed with a contest between people who are one and the same.

Previously, he brutally suppressed the May 18 Gwangju People’s Uprising by labeling it a riot caused by a mob that had received instructions from the North, and spread rumors about how the Democratic Republic’s peaceful construction of a hydroelectric power plant was a ploy to launch a water attack, squeezing out taxes from the people of the South and making a fuss about building a dam for counterattack. The whole world knows that he was truly an evil man obsessed with competition, an anti-unification element.

Chun Doo-hwan was a man who lived his entire life obsessed with competition between the people of the North and the South, and as if that weren’t enough he left behind a book focused on the same competition even in death. No wonder he will be subjected to the curses of all the people of Korea.

But, to be clear, even if the traitorous man’s last words were about seeing the day the North is absorbed into the South from the highlands of the front lines, that kind of a ridiculous dream will never come true in a hundred or even a thousand years.