Lee Jae-myung, a former presidential candidate and current governor of Gyeonggi Province, has been in and out of the news for a while, along with his wife, Kim Hye-kyung, over a twitter account. Currently inactivated, a twitter user by the username ’08_hkkim’, had posted political tweets for over five years. Since 2013, Lee communicated with this user via his official twitter account as well. Because the initials in the username “hkkim” match those of Lee’s wife, and because of a series of derogatory tweets about former gubernatorial candidates for Gyeonggi Province, people have suggested that Lee’s wife Kim was the scribe.

This particular issue surfaced in April, prior to the local elections, as tweets from this account actively supported and rooted for Lee while slandering former president Roh Moo-hyun, current president Moon Jae-in, and the then candidate for the governor of Gyeonggi Province Jeon Hae-cheol. Not only that, the account exchanged insults and jabs with other Twitter users and made jokes about the Sewol ferry. The police started the investigation, and the account was deactivated in April.

Twitter has refused to release the user information to the Korean government. If Kim is found to be the owner of this account, she will be charged with violating the Public Official Election Act, which prohibits anyone from spreading false information, slandering other candidates running for government election, etc.

In November, the police announced after investigation that the said account does belong to Lee’s wife and recommended prosecution. Lee and Kim have denied this, saying that the police does not have concrete proof.

On December 11, however, the Prosecutors’ Office, decided not to prosecute Kim on the grounds of insufficient evidence.

Here are some of the controversial tweets that were posted from the account: 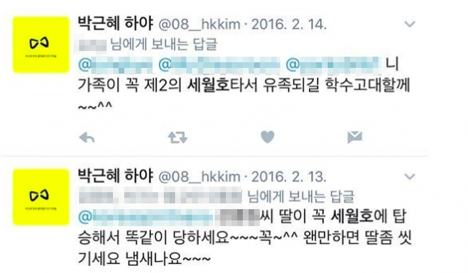 (a tweet to several other Twitter users) I’ll be praying that your family gets on the second Sewol ferry so that you’ll become the family of the deceased. (smiley face)

(a tweet to another Twitter user) Hope your daughter gets on the Sewol ferry and has the same thing happen to her. Really. Also, wash your daughter if you can. She smells. 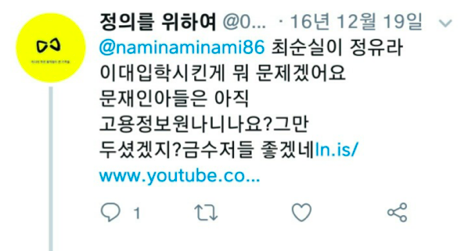 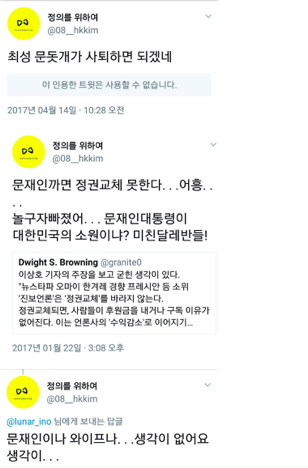 You can’t change the government if you get rid of Moon Jae-in… Roar… Are you shitting me… Is Moon Jae-in the hope of the Republic of Korea? Crazy Daliban (a derogatory term for Moon Jae-in supporters. The word is a portmanteau of dal, meaning moon in Korean, and Taliban).

Neither Moon Jae-in or his wife think… 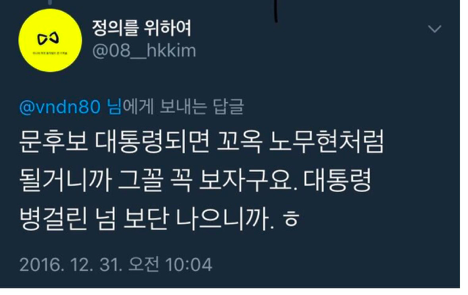 And what about Jeon Hae-cheol who’s colluding with the KLP? He turned this Gyeonggi provincial election into a shithole. If he loses, he’ll brazenly head to Yeouido (National Assembly).

It seems the legal part of the battle has ceased at least temporarily, but Lee is still under fire for abuse of power in admitting his older brother, who is alleged to be clinically insane. He is currently being prosecuted for the above charge and for violating the Public Official Election Act by spreading false information about the above incident. If found guilty, he’ll have to resign from his post. Lee is one of the most likely candidates for the next presidential election, so it’ll be interesting to see how everything plays out.

The results of the audits released by Park this year revealed that many kindergartens have embezzled funds. While kindergarten teachers’ monthly wages were only about KRW 2 million , principals received at least ten times the amount. Moreover, some kindergarten principals used slush funds to purchase brand name purses, sex toys, tour packages, and more, parents in particular were outraged and began to demand answers from kindergartens. National Assembly member Park Yong-jin introduced three bills to better control the funds that are given to private kindergartens (Private Kindergarten Act, Infants and Children Education Act, and School Lunch Act). But there was a huge backlash from the Korean Kindergarten Association (KKA).

On November 29, the KKA held a rally in Gwanghwamun Square to protest against the three Kindergarten bills. Lee Deok-seon, the head of the emergency measure committee of the KKA, took to the microphone that day and threatened to shut down all private kindergartens:

To end on a positive note

Park responded to their enthusiasm, saying,

I’m very happy. I’d like to thank all the players. The people of Vietnam also cheered us on. I am honored to feel the love of the Vietnamese fans. I’d like to dedicate this trophy to the people of Vietnam. This was the work of a team. There isn’t much that I do as a coach. It was possible because all 23 players made a lot of effort. I’m very happy to be with the Vietnamese team, and it is an honor to be a bridge between Vietnam and Korea as well.”

Park was also named Person of the Year 2018 in South Korea.