The slogan myeolgong, meaning ‘eradicate communism’, arose in South Korea in the 1950s, around the time of the Korean War, and was used in the South Korean military by soldiers saluting their superiors. It can still be heard in military songs, such as ‘The Torch of Eradicating Communism’,[1] but in common usage it has all but disappeared and has been replaced by less extreme terms, such as bangong (‘anti-communism’), due to South Korea’s strategic ambiguity as a country that has to navigate between the big powers of the United States and China. So, why has this nearly obsolete saying resurfaced in the media and political circles in recent weeks?

It began with Chung Yong-jin, the vice chairman of South Korea’s retail giant Shinsegae Group. On January 5, he shared a photo of pills usually taken to treat a hangover, with a message in Korean saying “I’ll survive to the end” and the hashtag #myeolgong (#멸공). His post was deleted by Instagram, however, for violating its policy on violence and instigation.

Chung expressed his displeasure at this censorship and posted his original post again alongside the notice from Instagram about the reason for its removal. 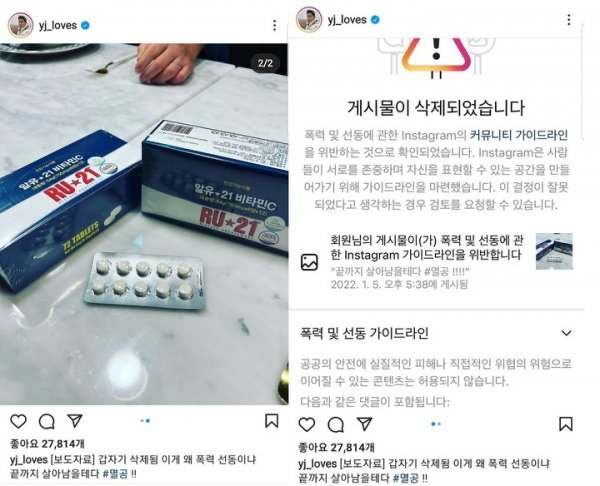 The following day, January 6, Instagram restored the original post citing “system error”, but Chung continued to express his anger. That evening, he posted a screenshot of a Chosun Ilbo article on the South Korean government’s inability to speak up against China, again with the hashtag #myeolgong along with several others, including #seunggongtongil (‘unification through triumph over Communism’), and #bangongbangcheop (‘anti-Communism, anti-espionage’). 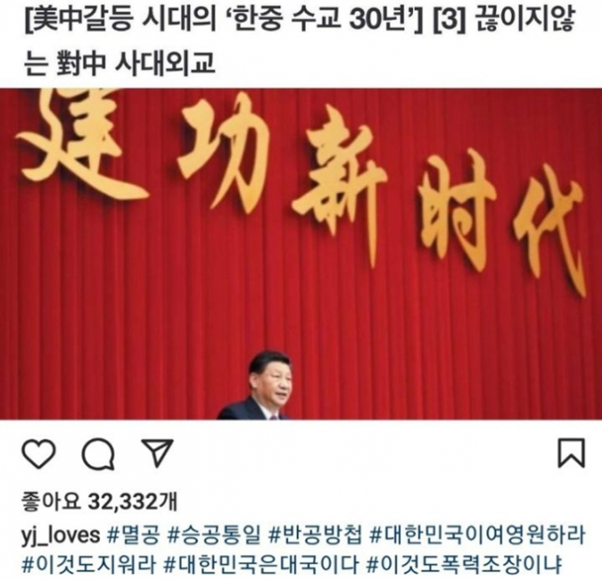 Following reports in the media and controversy in political circles, he deleted the post and replaced it with a screenshot of a Segye Ilbo article on North Korea and Kim Jong-un and wrote:

My #myeolgong has nothing to do with China. I am a person who doesn’t care at all whether another country is communist or democratic. If I go to another country, I just obey that country’s system and laws. I hope you don’t link me with China. The post that day, in which I captured the article from the Chosun Ilbo showing the face of the Chinese leader (in fact, I didn’t even know there was a face in that post), was an adverse reaction as a citizen of the Republic of Korea to the fact that Korea was called a ‘small country’. I presume that most Korean people would think that way. The Republic of Korea is not a small country. Please don’t refer to us as a small country. I state again, I have no interest in other countries. I hope people don’t get me wrong. #Iamanindividual[2]

As this wasn’t Chung’s first controversial post or the first in which he spoke out against communism, the issue itself might have died down within days. But unfortunately, it gained momentum, as members of the People Power Party continued the now-dubbed “myeolgong challenge”.

First came the party’s presidential candidate Yoon Suk-yeol, who posted a picture of himself shopping for groceries on January 8 with the hashtags #E-mart[3] (which is owned by the Shinsegae Group), #dalgyal[4] (eggs), #pa[5] (green onions), #myeolchi[6] (anchovies), and #kong[7] (beans). Although the hashtag #myeolgong[8] was not included in his post, people presumed that Yoon meant to imply dalpa myeolgong, taking the first syllables of the four hashtags. Dalpa here seems to mean Moonppa, a derogatory term for Moon Jae-in’s supporters, as dal means the moon and pa sounds similar to ppa, and myeolkong is very close to myeolgong.

Vice Chairman Chung Yong-jin of the Shinsegae Group appears to have caused a commotion by saying “myeolgong“. He seems like a great person.

I also want to have a go at shouting it, since it has been a long time.

How about doing a myeolgong campaign together?[9]

Were you jealous of how a word from Elon Musk shakes up the cryptocurrency market and the international financial markets fluctuate with a tweet from Trump?

Vice Chairman Chung Yong-jin, I ask you to be responsible as a representative of the businessmen of the Republic of Korea.

What good will it do for the national interest to provoke China by linking to an article with inaccurate facts?

It is said that a huge fortune can fluctuate with a single word.

Perhaps Shinsegae has no interest in China in the future. I don’t know. But I think that you should refrain from such inconsiderate actions, as a word from you can have a big impact on many Korean companies as well as workers in businesses related to China.[10]

The Democratic Party spokesperson Nam Young-hee hit out at Na Kyung-Won for her participation in the myeolgong challenge:

Thought you might feel hurt if we pretended not to have noticed. (smiley eyes)

I wonder who’s next.

When the People Power Party candidate Yoon Suk-yeol’s “fairness and common sense” failed, it seems he decided to go with “destroying commies and freedom”. As a slogan for the ‘70s and ‘80s’ black-and-white TV prosecutor Yoon Suk-yeol, it’s perfect.[11]

— Nam Young-hee, spokesperson for the Presidential Election Committee of the Democratic Party of Korea, January 8, 2022.

…Over the weekend, presidential candidate Yoon Suk-yeol and the People Power Party became absorbed in proving that they are an Ilbe[12] candidate and an Ilbe political party. When Shinsegae Vice Chairman Chung Yong-jin posted a photo of Chinese President Xi Jinping on social media, causing a myeolgong controversy, candidate Yoon Suk-yeol immediately went to Shinsegae’s E-mart to show that he bought anchovies (myeolchi) and beans (kong). He was followed by Na Kyung-Won, Kim Jin-tae, and deputy spokesperson Kim Hyeon-joo. It seems that they are pledging allegiance to Ilbe in order to gain support, since Yoon’s approval rating has not been high.

It is simply amazing to witness the pathetic sight of the presidential candidate of the first opposition party playing retrogressive games with anchovies and beans and talking about myeolgong. Is that the level of dignity of the conservatives? It’s as if he is confessing that the “dog apology” controversy was not a one-time mistake. Playing silly Ilbe games without thinking of the national interest. Have candidate Yoon Suk-yeol and the People Power Party even thought about the tears and struggles of our people who are doing business in China?[13]

— Kim Young-bae, vice chair of the Presidential Election Committee of the Democratic Party of Korea, January 10, 2022.

Even some members of the People Power Party, such as Kim Jong-in, the party’s former Presidential Election Committee co-chair, and Won Hee-ryong, a former presidential candidate, have expressed their discomfort and concerns about the myeolgong challenge. Yoon has denied that his shopping post was referring to myeolgong, that he just bought some items at E-mart and didn’t know anything about hashtags, and on January 10, when Shinsegae stocks had plummeted by about 8%, Chung stated that he would refrain from talking about myeolgong in future, due to the effect of “owner risk”— a Korean term referring to the risk posed to a company by the erroneous actions of its owner.