On September 30, the Chosun Ilbo published an exclusive titled “Controversy over BTS’s passion pay[1]… ‘Zero’ travel expenses despite accompanying Moon on his trip to New York?”[2] The article criticized President Moon Jae-in for not paying BTS properly for being special envoys on this trip, even though other special envoys received travel expenses. It also claimed that BTS had performed during Moon’s visit to Paris in October 2018 without pay.

BTS, who accompanied President Moon Jae-in on his visit to New York, United States, did not receive any expenses for airfare, accommodation, or meals.
BTS, who accompanied the president as special envoys,
had to keep up with President Moon Jae-in’s schedule, as well as First Lady Kim Jung-sook’s and Culture Minister Hwang Hee’s schedules, for three days.
This is not the first time the government has used BTS for a presidential event and not provided travel expenses.
Even in 2018, during President Moon Jae-in’s Paris tour, BTS was hired without pay.
At that time, Tak Hyun Min, the protocol secretary, caused controversy by saying, “We gave them presidential watches and called it even.”
It is clearly a mistake not to pay the requisite travel expenses.
Always riding on the coattails of BTS and performing image politics,
how can he be so shameless?
President Moon Jae-in, stop your piggybacking.
Stop exploiting South Korea’s young people.[3]

The controversy was short-lived, however, as Tak Hyunmin, Cheong Wa Dae’s protocol secretary, immediately denied the claims via Facebook.

The Chosun Ilbo published a malicious, misinformed article and some politicians expanded and reproduced it… Once again another exhaustingly tiresome thing has been repeated.
Personally, I don’t know how much the Republic of Korea should pay BTS for their hard work at the last UN tour.
It’s a pity that what the government can pay is always the same, as there are set rules and regulations.
Despite misinformation, and claims based on misinformation, expenses within the regulations related to BTS’s participation in the tour have already been paid. I still feel sorry that that was all I could do, but we reimbursed the costs of the flight, lodging, and meals for the special envoys and staff after the fact, and the amount had also been negotiated in advance.
…I honestly don’t know when it will end, this terrible habit the press and politicians have of disparaging the special envoys and the government with unfounded lies and ignorance. Some of those in the media and politics that lived through an era when the government could control artists at will have no clue what the world is like these days. Tsk.[4]

On October 1, he also appeared on Kim Hyun-jung’s News Show on CBS to make clarifications. He explained that a total of ₩700 million was paid to BTS as travel expenses, and that the 2018 event had been performed voluntarily by BTS, who were on a European tour at the time Moon was visiting France.

The king on Yoon Seok-youl’s palm

During the People Power Party’s presidential debate held on October 1, Yoon Seok-youl, one of the leading candidates, was seen with a marking on his palm. It was the Chinese character for king (王). 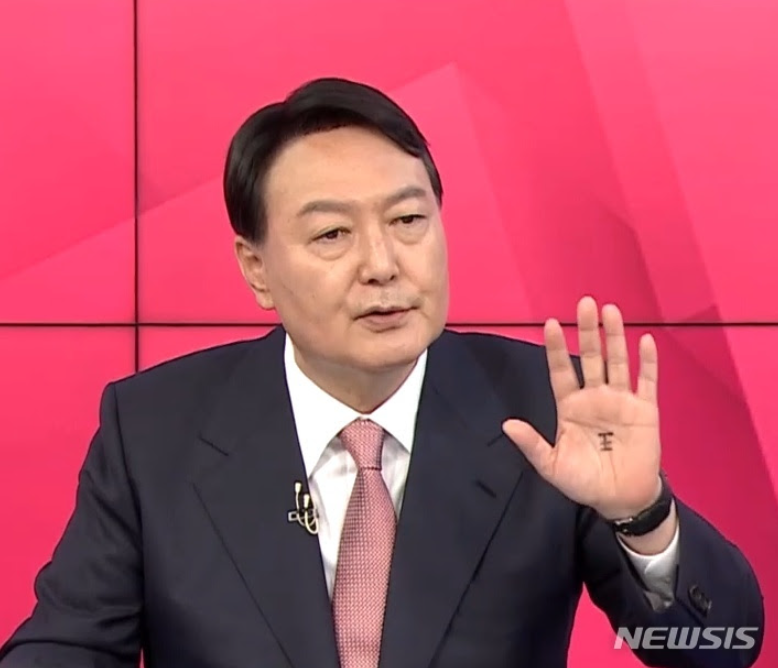 Another leading People Power Party presidential candidate, Hong Joon-pyo, was one of the first to remark on the marking on Yoon’s palm, calling it a shamanic talisman:

This is the first time I’ve ever seen someone receive a doctorate for research on fortune-telling.[5]
And this is also the first time I’ve seen someone running for president with the help of a shaman.
I saw in the media how [Yoon Seok-youl] was always with a shaman, and I wondered whether he was trying to become a shamanic president.
But now that he was revealed to have written a talisman on his palm,
all I can think is that it’s just absurd.
Public opinion rapidly deteriorated with one false rumor that former President Park Geun-hye ordered Choi Soon-sil to arrange a shamanic rite at Cheong Wa Dae.
I hope that you give up on this shamanic talisman campaigning.
This is childish behavior that devalues politics.[6]

Yoon Seok-yeol’s campaign initially responded to the criticisms by explaining that it was a one-off incident, in which Yoon’s old neighbor and ardent supporter wrote the Chinese character for “king” as a good luck charm prior to the debate.

A candidate who relies on shamanism and his lying staff

“The image must have been photoshopped.”
That was the reaction of those who saw the 王 character on Yoon Seok-youl’s left hand for the first time. It was that much of a shock.
No less problematic are the lies of the staff.
Although it was quickly revealed that Yoon had had the same character written on his palm since the third debate, along with the people saying how “scary” this all was, Yoon’s aides seemed to immediately close ranks and lie, saying “It was written by a supporter before the fifth debate and had not been on his palm in the previous debates.”
When the lie was discovered, they said instead that it had been written by Yoon’s supporters before each debate from the third one. Not only that, Yoon’s aides also lied that he had tried to erase it with soap but couldn’t, and before the fifth debate the same supporter had written over the unerased marking and made it even bigger. Oil-based paint markers can be wiped off clean with hand sanitizers that are now everywhere in this Covid era, and when Yoon attended a meeting on September 29, before the fifth debate, his left hand was very clean.
How can people lie so blatantly unless they think that the people are fools?
Out of fear about debates, candidates are free to wear talismans or perform shamanic rituals, but they should not try to deceive the people.
Candidates who rely on shamanism and lying aides, these are people who should never have the power of the state.[7]

Presidential candidate Yoon Seok-youl, a president is not a king but someone who serves the people.

There is a saying, “One thing about a person can say a lot about the rest of him or her.” Presidential candidate Yoon Seok-youl appeared in three consecutive People Power Party presidential debates on TV with the word ‘king (王)’.

Is candidate Yoon really a politician in modern Korean society? He used to call the people “subjects”, so is he calling the president “king” and is his political vision to set up an “absolute monarchy” where the king controls all state power while the aristocracy enjoys privileges and the people’s freedom is suppressed?

It is hard to believe someone with such an anachronistic and impure attitude of privatizing the prosecution power during his days as the prosecutor general and wishing to become president and own this country is a candidate for the presidential election in a democratic country.

There is also a suspicion that the Chinese character for king (王) written on Yoon’s palm has a shamanic meaning. Is it nostalgia for the Park Geun-hye and Choi Soon-sil scandal, which foreign media outlets dubbed the “Korean version of the Rasputin incident”? Our people remember the crisis that arose when an incompetent leader resorted to superstition and shamanism to make political decisions.

— Lee So-young, spokesperson for the Democratic Party of Korea, October 3, 2021.