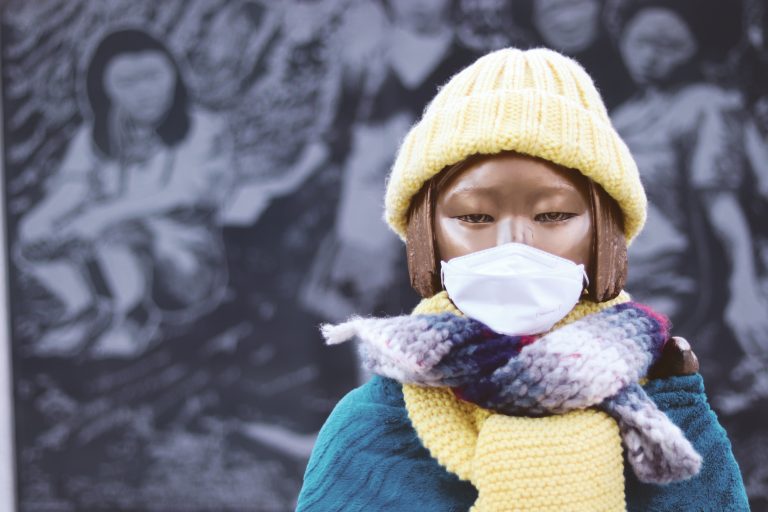 The issue of so-called comfort women, the victims of wartime sexual slavery by Japan’s military, has long been a point of contention between South Korea and Japan, with South Korea demanding that Japan admit the government’s direct involvement in the forced recruitment of the women and Japan denying the coercive nature of the recruitment.

On September 28, a German nonprofit group with ties to Korea unveiled the ‘Statue of Peace’ in Berlin. Known in Korean as sonyeosang (literally ‘Statue of Girl’), these statues have been installed in cities around the world, as well as in Korea, in an effort to raise awareness of the wartime sexual slavery perpetrated by Japan and to prevent war crimes against women. Because the statue was erected with permission from the city, Japan immediately responded with a statement of regret. Chief Cabinet Secretary Katsunobu Kato vowed to “approach various parties involved toward the removal of the statue” the following day. A few days later, the Japanese Minister of Foreign Affairs also held a 40-minute video conference with his German counterpart. On October 7, following these efforts by the Japanese officials, Berlin’s Mitte district office ordered Korea Verband, the group which had led the project to erect the statue in Berlin, to remove it by October 14, as it was seen as a symbol of politically and historically-charged conflict between South Korea and Japan, rather than a general statement against sexual violence against women in wartime.

At the decision of the Mitte district office, Korea Verband filed a petition with the administrative court to suspend the removal order, allowing the statue to remain at its site until the court conducted a basic evaluation. The Filipino Women’s Organization Gabriela Germany issued a statement against the removal of the Statue of Peace, and hundreds of people staged a protest rally on October 13. In addition, 113 South Korean National Assembly members submitted a letter to the German Embassy in Seoul, expressing regret and concern over the decision to remove the statue. Yoon Mi-hyang of the Democratic Party of Korea, who took the lead in writing and submitting the letter, explained:

“The Statue of Peace is not an issue of political diplomacy between South Korea and Japan. Rather it has been at the center of the activities pursued by women and victims over the past 30 years, hoping for the realization of human rights and peace. The erection of the Statue of Peace not only represents the restoration of the honor and human rights of the victims of sexual slavery by the Japanese military but also the restoration of women’s rights and the realization of true peace in places around the world where armed conflicts continue even today, and the determination to never again let such harm take place on earth. That is why the Statue of Peace is being erected around the world, including in the United States, Germany, Canada, and Australia. … Today [the representatives of each of the four political parties in South Korea] will meet with the German ambassador to convey our sincere wishes that the Statue of Peace can remain as a message of hope and peace for the women who have suffered sexual violence in the various wars taking place around the world. We will deliver our message, the message of the people of the Republic of Korea, to provide hope, solidarity, and encouragement to the victims of the Japanese military’s sexual slavery who have been fighting tirelessly for more than 30 years.”[1]

In response to the decision by Berlin’s Mitte district, Lee Yong-soo, a 91-year-old survivor of Japan’s military sexual slavery, released a statement:

“It is my firm belief that there can never be a claim to remove the Statue of Peace, which is a symbol of resolving the problems of human rights and world history. Arguing for the removal of the Statue of Peace, an important piece of historical evidence, is wrong. … The Statue of Peace is the deep sorrow and grief of the victims and the heart of the education of future generations. Germany, along with Japan, was defeated in World War II, but, unlike Japan, Germany has taken the lead in reflecting on its past history and correcting its wrongs. The Statue of Peace in Berlin, which could be called the capital of the world’s conscience, should not be removed.”[2]

On the same day that Ms. Lee issued her statement, the Mitte district office decided to defer the removal, stating that it hopes to explore a path by which South Korea and Japan can reach a compromise on the display of the statue.

Another issue from the past that recently made news was Steve Yoo’s request to enter South Korea. Steve Yoo, also known by his Korean name Yoo Seung-jun, is a Korean-American who was one of the most popular K-pop singers at the turn of the 21st century. He has been banned from entering Korea since 2002, when he gave up his Korean citizenship to become a naturalized American citizen despite having said that he would participate in Korea’s mandatory military service—something that is compulsory for all able-bodied male Korean citizens under the age of 38. On various television programs, Yoo had repeatedly said that all Korean men should serve in the military, implying that he would also do this, and had built up a favorable image for himself while many other celebrities and high-profile individuals attempted to evade military service. As such, when he acquired American citizenship a few months before he was due to serve, having already passed the physical exams, the sense of betrayal and anger felt by the Korean public was immense. Yoo was consequently deported and banned from entering South Korea, as the government considered his acquisition of the American citizenship an act of desertion.

Then, in 2015, Yoo filed a lawsuit after the Korean consulate general in Los Angeles rejected his request for an F-4 visa. As this type of visa, given to ethnic Koreans with foreign citizenship, would grant him privileges nearly equal to that of Korean citizens, including the right to work freely in Korea, some have argued that Yoo specifically applied for the F-4 visa, instead of a tourist visa, hoping to revive his career in the Korean entertainment industry. Yoo denied such claims, arguing that he just wanted to be admitted into Korea in the same way as other ethnic Koreans. Local and high courts in Korea ruled against him, claiming that his return to the country would demoralize and provoke Korean soldiers during their mandatory service. Then on July 11, 2019, the Korean Supreme Court ruled in favor of Yoo, citing an administrative flaw in the handling of his visa application, whereby the LA consulate general had not exercised its discretionary power when deciding to reject Yoo’s application and had only followed the Ministry of Justice’s entry ban imposed 17 years earlier. However, Yoo’s new visa request, filed in July 2020, was once again denied by the LA consulate, prompting him to file another lawsuit.

The Ministry of Foreign Affairs stated that the Supreme Court’s decision only pointed out that there had been an administrative flaw, which was not to say that the consulate general should reverse their decision and issue a visa for Yoo, and that having met the requirements to apply for a visa did not mean that the visa would be granted. The Military Manpower Administration has also doubled down on its decision to ban Yoo. During an inspection by the National Defense Commission on October 13, National Assembly member Lee Chae-ik asked Mo Jong-hwa, the Commissioner of the Military Manpower Administration, about “Yoo Seung-jun” and his claim that the entry ban was unfair, as all he had done was not keep the promise he had made as a singer (implying that he did not commit any crimes or acts that would warrant an entry ban). Commissioner Mo answered:

“First, I don’t want to call him Yoo Seung-jun. I believe he is Steve Yoo, because Steve Yoo is not a Korean citizen but an American. In 2002, he was given notice to partake in the obligatory military service. Yet he received a permit to travel out of the country and within a week had acquired United States citizenship, evading the military service. There is an ongoing administrative lawsuit that was filed because [the South Korean government] refused to issue a visa for him. I’ve been watching the issue closely and, since you ask me what my position is, as the Commissioner of the Military Manpower Administration, I believe that he should be banned from entering the country. The reason being that Steve Yoo evaded his noble duty and refused to serve, despite repeated promises to the people of Korea… If he enters Korea and resumes his career in the entertainment industry, imagine the feeling of loss that would be felt by the people who are currently doing their duty to serve in the military. And I believe that the people of Korea still have a very negative view [of allowing Yoo to enter the country]. ”[3]

In response, Yoo posted a lengthy letter on his Instagram, addressed to the Commissioner of the Military Manpower Administration:

“I am still sorry about being unable to keep my promise in 2002 to serve in the Korean military and thereby disappointing a lot of people. However, I believe that it is unfair to continue to deny my entry to Korea using the same logic from 18 years and seven months ago, citing the issue of the safety and security of the Republic of Korea.

At the time, there were no institutional considerations for Permanent Residents in the United States, regarding the obligatory military service, as there are now. Therefore, in order for me to be with my family and not lose my permanent residence in the United States, I had no choice but to acquire citizenship. After persuasion from my family and a lot of consideration, I eventually got my citizenship, but I did not break the law in the process. I believe that it is not illegal for a United States Permanent Resident to become a naturalized citizen. Then was it illegal for me to change my mind? Or was it illegal for me to break my promise?”[4]

Public opinion about Yoo is still largely negative, though some have begun to support his entry into Korea. It will be interesting to see how the lawsuit progresses this time around.