The truth behind the Vice Minister of Justice’s “emperor treatment”

On August 27, the day 350 evacuees from Afghanistan were brought to South Korea as “people of merit” to the country, South Korea’s Vice Minister of Justice Kang Sung Kook was berated for the picture below: 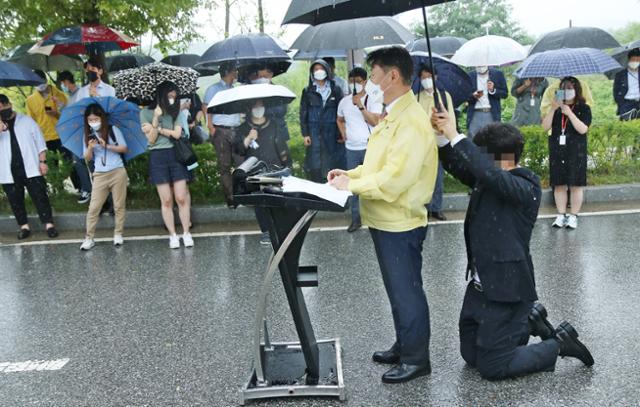 All day long, criticism continued online, with people saying “Are we living in the Joseon Dynasty?”[1], “This is gapjil“[2], and “Doesn’t the Vice Minister have hands?” Some media outlets sniped in particular at the vice minister’s personality, writing, “Even the president holds his own umbrella.”

Grace Presbyterian Church Ilsan was recently featured in the news for a couple of controversies over its pastors: one for being a woman, and the other for speaking out about embracing homosexuality.

We are saddened by the reality in which we cannot but make the extreme choice of withdrawing from the religious order. We are even more distressed by the reality in which we cannot find some other solution. Yet since we are unable to agree with the [North Gyeonggi] Presbytery’s resolution to recommend the dismissal of pastor Kim Geun-ju and female pastor Han Seon-yeong, we submit the petition to withdraw from the Korean Presbyterian Church for the following reasons:

First, this decision was made based on the will of most members of Grace Presbyterian Church Ilsan. The church of tomorrow will have to respect the congregation’s consensus on their conscience and freedom. The hierarchical and authoritarian system of a church that does not respond to the conscience appeal of the congregation is the old order that the Reformers fought against. We will say when something is wrong. It is unacceptable for a presbytery to infringe upon the pastoral authority of a local church and the sovereignty of its members on the basis of a particular interpretation of the Bible. We obey the truth, but we oppose violence. We will obey the authority of the Bible, but we will resist the undue coercion of the authority of the Korean Presbyterian Church.

Third, it is a decision based on a cautious attitude toward the issues of homosexuality and homosexuals. Homosexuality is a topic of ongoing debate. For churches that absolutely accept the authority of the Bible, it is one of the dilemmas that require a careful approach. The Presbytery’s investigation report and resolution stipulate that Pastor Kim Geun-ju’s confession—”I will never say that homosexuality is a sin”—is “a claim that clearly contradicts the essential Christian belief in the Bible.” Instead, Pastor Kim Geun-ju’s confession means that when he reread and interpreted the Bible with a scholarly conscience, he learned that the Bible does not condemn sexual minorities, and therefore he resolved not to make hateful remarks going forward. Grace Presbyterian Church Ilsan cannot fully agree with Pastor Kim Geun-ju’s interpretation of the Bible. Nevertheless, it is unjust to forbid and oppress the study and interpretation of the Bible from a new perspective, and therefore we oppose the action of the Presbytery.

As the Cape Town Commitment (2010) states, we will cautiously approach all sexual issues, including homosexuality, and “seek to understand and address the deep heart issues…; to reach out with the love, compassion and justice of Christ, and to reject and condemn all forms of hatred, verbal or physical abuse, and victimization of homosexual people.”

Nor will we accept the actions of the Presbytery to condemn, punish, or disqualify us for a different interpretation of what the Bible does not affirm. We reject their condemnation and accusation of other opinions as heresy to defend our own beliefs. We believe that it is our mission to respect differing opinions, different sexes and all existing minorities, and to create peace without discrimination.[6]