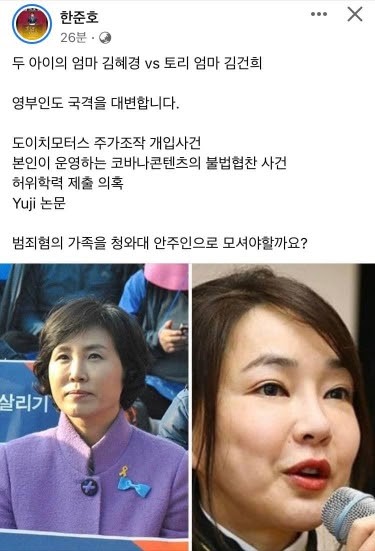 The first lady is also a symbol of national dignity.

Allegations of involvement in Deutsche Motors’ stock price manipulation and illegal sponsorship for her own company, Covana Contents.
Suspected of listing fake academic degrees on resumes.
The Yuji article[2]

Should someone accused of crimes be the Lady of Cheong Wa Dae?[3]

The trouble was with the very first line in his post: “Kim Hye-gyung, mother of two children vs Tori’s mother Kim Kun-hee”

Soon after the post was uploaded, the first line was changed simply to “Kim Hye-gyung vs Kim Kun-hee”.

Unfortunately, many people had already seen the original version and noticed the implication that being a “mother” was related to “national dignity”.

Presidential candidate Lee Jae-myung, does a woman who hasn’t given birth damage the nation’s dignity?

National Assembly member Han Junho, candidate Lee Jae-myung’s chief secretary and one of his closest aides, wrote on Facebook: “Kim Hye-kyung, mother of two children vs Tori’s mother Kim Kun-hee” and that “The first lady is also a symbol of national dignity”.

What on earth does national dignity have to do with having a child? Is he saying that Kim Hye-gyung, wife of candidate Lee Jae-myung, who has given birth to two children, increases the nation’s dignity, while Kim Kun-hee, wife of candidate Yoon Seok-youl, who has not had children, lowers it?

We know that the political world is cruel and elections get nasty, but is it really okay to open up a personal wound and use it against her so savagely?

The remarks made by chief secretary Han Junho are the most appalling words of all time and they have deeply wounded not only candidate Yoon Seok-youl but also all subfertile and infertile couples across the country.

Chief secretary Han Jun-ho said that he deleted the relevant part when his remarks became an issue, but he has so far not offered any apology. Moreover, candidate Lee Jae-myung has made no mention of it, even though it was his chief secretary who made these remarks.

I’d like to ask candidate Lee Jae-myung. Are all infertile couples across the country lowering the dignity of the Republic of Korea?

I ask that you immediately fire chief secretary Han Junho and get down on your knees to apologize to all couples across the country who are struggling with infertility.[4]

The next day, the Korean National Council of Women also issued a statement regarding Han’s remarks.

Han Junho, a member of the Democratic Party of Korea and the chief secretary for candidate Lee Jae-myung, has caused controversy by posting on social media, “Kim Hye-gyung, mother of two children vs Tori’s mother Kim Kun-hee”.

We cannot but be angry at the behavior of politicians who are once again using a new conflict to split our society that is already divided over so many issues.

Despite the seething anger of the people, we have not heard an apology from Han himself nor the voices of the female lawmakers of the ruling party. We would like to ask what the presidential candidate who appointed such a member of the National Assembly as his chief secretary thinks of this remark.

Are women a tool for procreation? Since when did women who cannot not give birth become an object of criticism in our society? It is truly deplorable to see politicians using whether or not women have children as a means to divide our society.

It is unacceptable to treat a woman as an instrument of pregnancy and childbirth just because she is the spouse of a presidential candidate. We can only deplore the savagery of those who neglect the gender sensitivity that they themselves promoted, in order to attack their opponents.

Even if he deleted the post, he cannot erase the wounds of the women who saw it. We strongly urge the Democratic Party and Candidate Lee Jae-myung to take a responsible position and reasonable measures as soon as possible.

Sixty member groups of the Korean National Council of Women, and the five million members of the 17 city and provincial Councils of Women across the country demand a sincere apology and a retraction of his words from chief secretary Han Junho, who triggered this incident. We also demand an immediate apology from presidential candidate Lee Jae-myung for the remarks that have driven a nail into the people’s hearts and ask him to fire his chief secretary.[5]

On November 20, Han Junho apologized on Facebook for his remarks:

There has been controversy and criticism regarding my post from a few days ago.
I sincerely apologize to those who were inconvenienced or hurt by my remarks.

While I never intended to divide women according to whether they’ve given birth or not, I do admit that there was room for misunderstanding in my choice of words.

I will take this as an opportunity to examine and reflect on what I write more closely in the future.[6]

Lee Jae-myung is yet to make a statement on the matter.

The second gender-related debate began on November 20. Jang Hye-young, a National Assembly member for the Justice Party, posted on her Facebook page about a woman who had recently been stabbed multiple times and thrown out of a 19th floor window. Alongside links to two articles on the incident, Jang wrote:

Every day, we see reports on the gruesome deaths of women who are murdered for breaking up with their boyfriends. The number of such murder cases is on the rise.

I pray for the souls of the women who must have died in extreme fear and pain, and I am outraged by all those who neglect and even promote this society in which such things can happen.

How can women not be feminists in a world where they get stabbed to death or dropped from the 19th floor for trying to break up with their boyfriends? Do you hate feminism? Then don’t kill women. Take the lead in ensuring women’s safety.

And the name of this crime is not “apartment murder” but “date murder”. Please do not obscure the essence of the case.[7]

Unfortunately, her post was met with criticism from Lee Jun-seok, the leader of the People Power Party:

As the election season approaches, attempts to link various crimes with feminism are starting again.

What would happen if we looked at the case of Ko Yu-jeong with these standards and generalized it? Ordinary people look at this incident, where Ko Yu-jeong slipped her ex-husband sleeping pills, severed his body parts, put them in trash bags, and dumped them at sea, and see Ko Yu-jeong only as a vicious killer. They don’t try to stir people up and turn this into a gender conflict because the killer was a woman.

All discriminatory discourse, from anti-Semitism in the past to racism, begins from such stereotyping and social agitation.

I hope that the label of “potential male perpetrators”, which is no different from the antipathy toward Jews partaking in economic activity, the rumor that Koreans may have poisoned wells[8], and the demeaning of Jeolla provinces, etc., will vanish from the political arena in 2022.[9]

Jang replied to Lee’s post, mainly arguing that it was impossible not to see the incident as a gender issue.

The more I think about it, the more ridiculous it seems.

People Power Party leader Lee Jun-seok, are you worried that you will be killed by your girlfriend because of Ko Yu-jeong? Do you search for “a safe way to break up” before breaking up with your girlfriend?

Obviously you do not understand the crux of the matter, as you have no perspective on gender-based violence and are only interested in inciting anti-feminism. If you would put even a fraction of your lust for power into an interest in women’s safety, you wouldn’t be so ignorant as to claim that I am “linking” feminism with stalking crimes or date murder.

Most of the victims of domestic violence, stalking, and homicide in intimate relationships are women, and most perpetrators are men. This is a fact, not an issue of concept. To argue that this is not related to gender is to cover up the fundamental feature of the problem.

It is becoming increasingly difficult to take a rational and common-sense approach to the issue of gender-based violence, due to party leader Lee Jun-seok’s anti-feminist incitement. Any discussion about feminism gets brushed aside as causing gender conflicts, so now other politicians do not speak on this issue, because they are tired of being blamed for causing such conflicts.

The more party leader Lee Jun-seok incites anti-feminism, the more he pleases criminals who commit gender violence, and the more women are killed. Mr. Lee Jun-seok, please remember: Women are dying because they have told their boyfriends that they want to break up. As a member of the National Assembly, I express my deepest regret at the flippant and ignorant remarks you made, without even a hint of responsibility or prudence as the leader of the first opposition party.[10]

— Jang Hye-young, member of the National Assembly for the Justice Party, November 22, 2021.