These reflections are from our weekly newsletter. Sign up for some big picture analysis and conversation.

The 2018 Pyeongchang Winter Olympics blasted through South Korea in February, and its social and political effects continue to ripple. While I’m not particularly interested in winter sports, I didn’t want to miss a rare international event, and my sports mad husband and I made two visits to the Games (and watched a lot of TV).

Weather: The Gangwon Province off the eastern shore is known for its biting mountain winds. As predicted, the chill factor made these Games among the coldest on record, and gusts toppled temporary structures and delayed several competitions. Visiting Gangneung’s coastal “coffee street”, the Pyeongchang Olympic Plaza, and a women’s biathlon event on a day trip that first week, we didn’t see too many Koreans braving the frigid slopes. The spectators we saw were mostly face-painted Europeans flying their flags near the finish line, and the bleacher seats were largely empty.

Transportation: The weather and general unfamiliarity with winter sports were not the only factors deterring spectators. The sprawling venues across the countryside made transportation difficult, even for native Koreans like my husband. While planning out the routes before the games he confidently reminded me that Korea’s public transportation is among the best in the world and that everything would be translated into English and “foreigner friendly”. That may be true in Seoul, but a misread ticket at Pyeongchang could mean hours spent on one or more shuttle transfers looking for the correct venue. Take what happened to us. There were two possible routes from Gangneung Station to Phoenix Snow Park in Pyeongchang, about 70 km away: the bus route which entailed three transfers over two or three hours, and the pricier option of a 20-minute KTX train to Jinbu Station plus a 40-minute shuttle to the park. Taking the latter option we arrived and ran the gauntlet of multiple ticket and security checks, only to have a volunteer inform us at the final checkpoint that we were at the wrong venue. We were determined to make the most of our 60,000 KRW tickets and took another 40-minute shuttle to Jinbu Station, then a 10-minute shuttle to one of the several other venues with “Alpensia” in the name, and managed to catch the run by the Austrian medal contender in the final 20 minutes.

In a different kind of ticket mix-up, and through no fault of his own, a Canadian man with the maple on his cap sitting next to me at one hockey game had intended to be at another game, Canada v Korea, happening simultaneously but at a different venue. His son who lives here had booked the tickets five months in advance, but the website apparently hadn’t made clear that there would be more than one hockey game during the same time slot. That made absolutely no sense to me and I felt terrible, though the Canadian kept insisting it was fine.

Sustainability: Pyeongchang is hailed, at least in Korea, as one of the most economically and environmentally sustainable Olympic Games. The 12.9 billion USD cost for high-speed railway construction, athletic venue construction, and event management went 60% over the initial budget but that is still significantly lower than the 50 billion USD games in Sochi. The Olympic stadiums that will be used four times (for the opening and closing of the main and Paralymic Games) didn’t get roofing and heating, and are set to be demolished. Questions of who will foot the bills for other athletic venues are still being negotiated. The Korean media is generally congratulatory over the economically efficient and perhaps even profit-making event management, with 1.07 million more tickets sold than expected. But to assess the long-term costs and benefits of the railways and venues will require more time.

The grey mountains of Gangwon Province are unlikely to see this many foreigners in the future, nor will their residents suddenly turn to alpine skiing. The environmental concerns have been less visible in the news media, but the sporadic tufts of transplanted trees that line the ski slopes are sad reminders of once ancient forests. The environmental damage will take centuries to recover from, if they ever do. 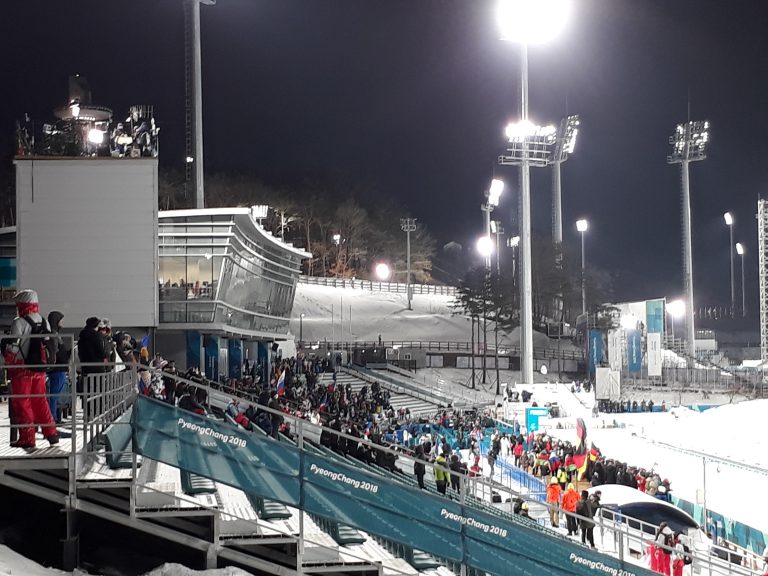 Empty seats (but cheering crowds?): Much has been written about the empty seats. Apparently corporate sponsors and local government offices bought tickets in bulk and handed them out at low or no cost, and the recipients never turned up. As with the early biathlon event, the stands at the outdoor ski and snowboard events were glaringly empty, even toward the end of the Olympics. The Finland v Sweden men’s hockey game had whole sections filled with Korean teenagers who looked to have come as part of a school field trip. The young crowd with handmade pickets and flags chanting high-pitched slogans for Finland was a strange sight indeed—Did they really care so much about who won? I later inferred from news reports that they must have been volunteers, asked to change out of their pink uniforms and fill seats after shifts. But the Lunar New Year holidays and surprise Korean team successes saw attendance improve.

Technology, technology, technology: Beyond the athletic events the Olympics make for spectacular displays of host country’s traditional culture. But in line with the dancing LED screens and coordinated drones in the opening ceremony, most of the attractions I saw at the Pyeongchang Olympic Plaza were more about tomorrow than yesteryear. There was a small corner of the plaza near the dining tent with a room for some hands-on activities such as mandala painting and wood printing, another Korean style wooden house, and a large bell you could strike for yourself. But most of the other attractions—in mega-tent constructions sponsored by the Samsung and KEPCO and so forth—were technology-mediated experiences such as virtual reality snowboarding or arcade-like drone simulations. A station devoted to “K-ART” fused the traditional with the technological, displaying a wall of holographic traditional icons and Nam June Paik installations.

The media coverage and public response

A few popular events: Watching the games each night at home, we clicked through the live coverage on the internet to find only one, maybe two, games—those in which Korean athletes were most likely to medal. All of the short track and speed skating events were broadcast, plus the figure skating and the latest curling events (which drew the most viewers). But alpine and ski events, even those featuring Korean athletes, never received live coverage; at most, the edited highlights were uploaded online. When my husband and I saw the Korean men’s ski jumping team in person at the venue, we already had a feeling that the event wouldn’t be broadcast live, even with the team’s dramatic backstory and the movie it had inspired. As the host country of the Olympic games, the three network channels should at least have broadcast all the medal events live. And the Paralympics are now receiving even less airtime, a fact that President Moon Jae-in saw fit to bring up at a gathering of the Joint Chiefs of Staff. The excessive focus on the most popular events had some sports enthusiasts like my husband take to calling it the dong-nae (meaning neighborhood) Olympics, a wordplay on dong-gye (meaning winter) Olympics.

Narratives: Audiences crave uncomplicated stories of good and evil, and athletic events are good fodder. Coupled with the nationalism-high that occurs at every international games, a social media backlash was sadly to be expected against any foreigner who dared criticize Korea (the Dutch speed skater against dog-eating), as were the death threats to a Canadian athlete over a Korean’s disqualification.

But this nationalistic social media bullying seems to have decreased since the uproar against Apolo Ohno in 2002 (although matches against Japan still come with added pressure). With the social and political issues of the past few years—the Sewol Ferry disaster, the impeachment of president Park Geun-hye, Korea’s own #MeToo movement—Koreans have become less trusting of the government and more willing to speak up with their individual concerns. In the Pyeongchang games, the greatest scrutiny fell on the Korean athletes themselves. The media and netizens constructed narratives of pure goodness concerning the gold medalist Nao Kodaira’s embrace of the runner-up Lee Sang-hwa, while the women’s curling team from the backcountry town of Uiseong was the perfect Cinderella story. Meanwhile, the women’s speed skating team pursuit took on a narrative of pure evil. Audiences were shocked by Kim Bo-reum’s smirk and Park Ji-woo’s nonchalant blaming of Noh Seon-young in the post-race interview. The camera caught nobody except coach de Jong comforting the hunched figure of Noh who had fallen behind on the last lap. The narratives combined to paint a story of bullying stemming from corrosive factionalism and favoritism in the Korean Ice Skating Union (KSU).

A shift to fairness: For this generation of Korean youth, the key issue is not nationalism or success, but fairness. The uproar against the KSU’s systematic favoring of athletes graduating from certain high schools and universities mirrors the issue that sparked the 2016 candlelight protests and the impeachment of the former president: the special treatment of Chung Yoo-ra by Ewha Womans University. The daughter of Park Geun-hye’s personal friend Choi Soon-sil, Chung entered and attended the prestigious university on a shady equestrian scholarship. Wealth and gold medal success are no longer virtues enough to forgive any means; in “Hell Joseon” where the younger generations compete without hope of climbing the socio-economic ladder, equality and equity are the overriding concerns.

International repercussions: Of course, the Pyeongchang Olympics gained further global attention from the heightened nuclear tensions on the peninsula and the subsequent sudden thaw with the visit from North Korea’s “first sister” and other athletes and cheering squads. The South is hoping that the Olympics will prove more than temporary distractions. The careful diplomatic deal-making have already led to a South Korean envoy’s two-day visit to Pyongyang to meet with Kim Jong-un, then another to the US to meet with Donald Trump. The visits have resulted in summits between North and South Korea in April, and another between the North and the US in May. In the unprecedented pace of developments, I like many people, remain cautiously hopeful. According to a recent poll, 73.1% of South Koreans welcome the North’s change of attitude and openness to denuclearization talks, while 64.1% also distrust such attitude.

As a Korean American, I usually find myself rooting more for Korea than the USA in these sporting events. Nothing against the country of my citizenship, but it’s more fun to cheer for Korea in the company of my Korean family and friends who seem more emotionally invested in their team’s victory. This time, however, while I still did cheer for the Korean teams, the sight of either the Korean or American flag made me cringe. Since the belligerent Park Geun-hye supporters started calling their gatherings ‘Korean flag’ (Taegeukgi) rallies, I have begun to associate it with irrational and reactionary movements. The same part of my brain gets activated when I hear chants for the USA or see the Stars and Stripes—they remind me of the recent developments in “America first” nationalism. It doesn’t help, of course, that both flags often fly together at the rallies. It will take me some time to recover my pride in them and what they stand for.

Previously at The Dissolve