Our third in a series on the Korean publishing industry. Brought to you in partnership with Pressian.

A crisis of publishing, a shrinking number of readers, and bookstores on the verge of death. These are all stories that we’ve become desensitized to because we’ve heard them so many times.

But there is an indicator that seems to be going against the flow. According to the bookstores, a total of 52 new branches of large-scale bookstores opened in about a year and seven months. Seventeen of the 39 Kyobo Bookstores and nine out of 30 Youngpoong Bookstores opened recently.

A new business method has emerged in the bookstore business as well. Youngpoong opened its Sejong and Songdo bookstores as franchises. The head office delivers books directly to these stores, which only focuses on book sales and management. Bookstores have begun to franchise their businesses.

Online bookstores are expanding their influence in the offline market by increasing the number of used bookstores. Aladin, which actively sets up used bookstores in major locations throughout Korea, currently sells Aladin goods and used books in 37 locations. Yes24, the most popular online bookstore, was a step behind, opening its offline stores starting in Gangnam last year, followed by Hongdae and Mokdong in Seoul, as well as Seo-myeon and Jangsan, Haeundae, in Busan.

In an age when books don’t sell—and an age when you can purchase books online—why are the number of bookstores increasing? That doesn’t seem to make sense.

This month’s World of Books Beyond The Cover looked into the issue of the rapidly increasing number of bookstores. This is a summary of the dialogue between Jang Eun-su, CEO of Edit Culture Laboratory, and Lee Hong, Executive Editing Director at Hanbit Biz, held at the Printing Culture Research Center in Mapo-gu, Seoul, on August 16, 2017. 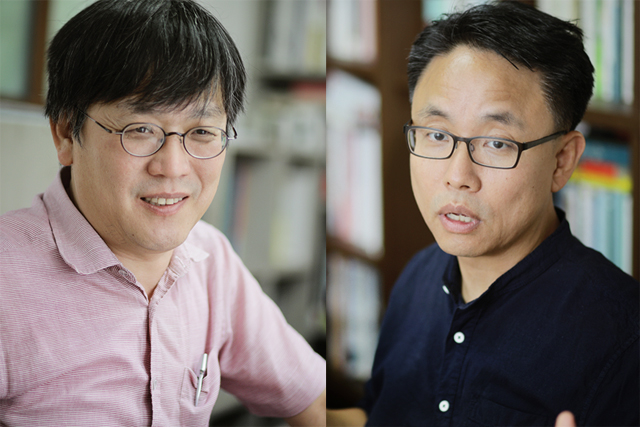 Only the large bookstores are expanding

Lee Dae-hee : The “publishing crisis” has become prevalent in Korea, but bookstores are increasing at a rapid pace, particularly starting in 2016. Aggressive management seems to be a trend, especially in big bookstores, but there are a growing number of local and independent bookstores with their own charms that are receiving the media spotlight.

At a glance, it doesn’t make sense. It makes you wonder if books really aren’t selling well. Why are the bookstores expanding?

Jang Eun-su : Basically we can say it is the direct and indirect effects of the fixed book price policy. Since it became possible for local bookstores to compete with online bookstores in terms of price, the business value of bookstores became somewhat secure.

But not all types of bookstores are increasing. The so-called stationery bookstores that used to be around schools, mainly selling reference books, are disappearing. The publishing industry assesses that the demand for reference books have decreased by about 30 percent due to the fall in the student population.

The business environment for major local bookstores, such as Bulgang Bookstore in Seoul, Jinju Bookstore in Jinju, and The Writing Nook with Books in Chungju hasn’t changed much either. The sales of reference books, which account for a big portion of their sales, has decreased as well, but the system of local libraries purchasing books from local bookstores has been established, improving the business environment that way.

You said the environment for bookstores improved when the fixed book price policy became enforced. But from what I hear about the publishing community, it doesn’t seem like the publishing market has grown any bigger. If the number of bookstores have increased, shouldn’t the book sales go up?

Lee Hong : It’s great that offline bookstores are increasing in number. But considering that this trend is only the result of the expansion and increase of the market share of several large bookstores, we can’t say that it’s a healthy growth.

An increase in the number of bookstores is desirable when it leads to the development of the reading ecosystem and the vitalization of publication and distribution. I’ll go into more detail later, but if only certain books are displayed and the sales become more polarized under the leadership of certain participants of the market, that’s not very favorable.

It’s particularly noteworthy that Youngpoong Bookstore tried franchising, which is a new method in the market.

Jang Eun-su : Not only Youngpoong but we should also mention Interpark, which recentely acquired Song-in Books. This is a sign that bookstore brands that should really be in retail are stepping up to try wholesale. Aladin is already providing books to local bookstores.

I wonder if this phenomenon of bookstores becoming wholesale businesses so quickly is a good thing or not. Because it’d be easy for a healthy local bookstore to become a de facto subsidiary of large bookstores. If things go wrong, display standards that are unique to local bookstores might vanish in the future. If we want to prevent this, it is urgent for us to reform the distribution chain so that local bookstores can easily acquire books.

Lee Hong : Even though the number of bookstores is growing large, the market could be monopolized by big bookstores, greatly reducing the book choices for consumers. This could completely disturb the publication and distribution market.

Your assessment of the growth of bookstores is similar to the way certain conglomerates grow. It made me think of the screen monopoly controversy in the film community. But there’s something that’s difficult to understand. Even as the bookstores are growing, people still talk about the publishing crisis. Doesn’t the increasing number of bookstores suggest that the publishing market is improving?

Jang Eun-su : No. I’d first like to point out that the growth isn’t very fast. According to the statistics of the Publication Industry Promotion Agency of Korea, a total of 61,500 new books were published in 2013. That number increased to 75,700 in 2016. Within three years, the number of newly published books per year rose by about 23 percent. The increase in the number of bookstores hasn’t been able to catch up to the increase in the number of books. This means that the competition in the publishing market has intensified more than the publishing market can handle.

What is more important is that even though the number of bookstores has increased, the number of books that are displayed in bookstores has not increased. This was what Mr. Lee here mentioned. It seems that the concentration of bestselling books on display has intensified compared to the past. Simply speaking, only the books that sell well are placed on the display shelves that are easy for consumers to spot, and this phenomenon has intensified.

Another important thing is that the types of books that are displayed on the shelves don’t vary much even in large bookstores. The new Kyobo and Youngpoong bookstores that are sprouting up here and there recently are closer to the so-called Tsutaya-type bookstores. Rather than providing a lot of different types of books, they have changed to allow readers to sit and read and also browse various products other than books.

Lee Hong : It’s similar to how an increasing number of CGV or Lotte Cinema theaters doesn’t make filmmakers happy. Conglomerate multiplexes have increased, and as a result films being screened in the theaters have not been diversified. This is similar to the increasing trend of bookstores today.

And the more the number of brand bookstores increases, the more bestselling book rankings become unified, because a smaller number of books receive more exposure. The various management philosophies and local characteristics of different bookstores disappear, and bookstores become more uniform and fixed.

The centralization of market share occurs for bookstores, but it is difficult for the share and power of publishers, which supply the books, to be reorganized. And it’s not desirable either. The final destination of the bookstore strategies of aggrandizement and increased market share is market control.

Do you mean that publishers will become a type of subcontractors for bookstores?

What is display advertising?

Jang Eun-su : Simply put, bookstores portion out and sell the places (display shelves) that books can be displayed on and make profits from advertising them. So bookstore merchandisers aren’t displaying the books they believe are great but are displaying books from publishers that pay the most advertising fee.

Display advertising has become popular just in the past three to four years. You can assume that most of the display shelves (where books are placed flat to show the full covers along the aisles) are paid for by publishers.

Lee Hong : As the display advertising became common, special displays that used to be planned by bookstores (such as “Bone-Chilling Mystery Books to cool your summer nights”) are becoming decided by the advertising fees that publishers pay.

So as large brand bookstores increase in number, mainly books from large publishers who have big sales forces, meaning who can pay a lot of advertising fees, get more exposure than others?

Jang Eun-su : That’s right. That’s why the publishing community has been talking about polarization due to the increase in the number of bookstores. This reduces choices for the readers. As bookstores become accustomed to display advertising, they begin to focus more and more on displaying books with high advertising fees. And as a result, the bookstores’ own content analysis and planning weakens.

Lee Hong : When Chungjang Bookstore in Gwangju and other local bookstores had a bit of power, bestsellers were more diversified. Books that weren’t bestsellers in Kyobo Bookstore became bestsellers in Chungjang Bookstore. That was because local bookstores were able to display the books with their own philosophy and identity. Bestselling books were more diversified then compared to now. Now, the bestseller rankings are similar all across the country from Seoul to Jeju Island.

Bookstores are places that connect people

It sounds like you’re saying that bestsellers have become less healthy.

The Korean publishing industry grew a lot in the 1980s. Students involved in the democratization movement gathered together at bookstores that specialized in social science books. As a result, bookstores came to be well versed in this field. Since bookstore staff members were well acquainted with good books in social sciences, they were able to provide a list of recommendations to their consumers, and each bookstore had its own unique characteristics.

Recently, when I meet people in the publishing industry, they say that bookstore owners who can discuss good books with editors have increased with the rise in the number of independent bookstores. In the end, it’s not good to simply increase the number of brand bookstores. It’s good when the characteristics of bookstores become diversified.

But due to the nature of independent bookstores, there is a limit to how much they can grow. This means that there is less opportunity for the readers to come across more diverse books. Is there a way we can overcome this problem?

Jang Eun-su : Eventually they need to stick to the local area. Readers and bookstores need to form a strong relationship. When a network of libraries, schools, rating groups, and other local book-related cultural agents is formed to collaborate with bookstores, books required by different regions will be diversified, starting from the bookstores.

Even for brand bookstore chains, it’s necessary for them to reflect the desire of the local area. Bookstores need to think more about approaching the consumers in the area rather than simply allowing people to dwell on the convenience of having a big bookstore in the neighborhood.

Lee Hong : We need to think more about qualitative growth rather than quatitative growth. Independent bookstores can’t support the current publishing industry in any case. Brand bookstores need to make an effort to become places where people can interact, rather than simply focusing on displaying books and selling goods.

LEE Dae-hee  has worked at Pressian since 2008, covering mainly society and economics. He is the co-author of Korea’s Working Poor and Stock Butterfly Effect. Reach him at eday@pressian.com.