In a recent interview, Ryan Reynolds, who played the titular character in the film Deadpool 2, became the talk of the town when he pledged to down a bottle of soju in a single shot if the film was a big hit in Korea. A Hollywood celebrity mentioning soju, a Korean liquor, was interesting enough, but it was even more amazing that he talked about downing a bottle of soju, which is often a punishment or pledge that people make in Korea. In a foreign country, using the native language or mentioning a cultural point is a great way of showing interest in the country. Ryan Reynolds used soju in the interview to do so.

Soju is a representative liquor of Korea. Not only is it something that Koreans drink a lot but it is also a Korean liquor that is difficult to find elsewhere. However, the soju that we are talking about now is different from traditional soju. Traditional soju, which people have been drinking for several hundreds of years, is produced differently than the diluted soju in green bottles that we drink today. Since the production processes differ, traditional soju and diluted soju smell and taste different as well. What is this familiar yet unfamiliar traditional soju? In today’s column, I will get into the details.

The soju that we are familiar with is diluted and therefore different from traditional soju.

There are various types of distilled liquor around the world. What Koreans call yangju, or Western liquor, tends to be distilled. Whiskey is a distilled liquor made from grains, such as barley and corn; brandy, from grapes and other fruits. Cognac is a variety of brandy made in the eponymous town in France. And there are yet more: tequila is made from agaves, which are succulents; rum is made from sugarcanes. China’s baijiu is likewise distilled, and Japan’s shochu is very similar to the Korean counterpart. Distilled liquor is assumed to have been invented in Persia, spreading from there all across the world. 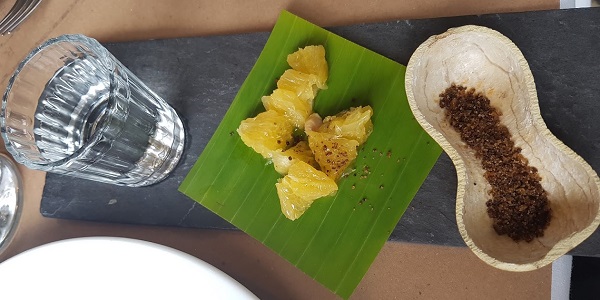 There are many different kinds of distilled alcoholic beverages and as many different ways to drink them. In Mexico, people sometimes drink tequila with edible insect powder and oranges.

After passing through Mongolia, distilled liquor eventually reached Korea, where it became soju. As such, soju is one of the remnants of the Mongol dominance over Korea during the Goryeo dynasty. Mongolian troops were stationed in Kaesong, Andong, and Jeju Island. There were soju distilleries in the Mongolian military camps on the Korean Peninsula, and soju production methods began to spread across the peninsula from the towns with distilleries. Traditional soju was mainly made with rice. The grains were first fermented to make an alcoholic beverage, which was then distilled in an earthenware pot called sojutgori. At a time when there was not enough rice to eat, alcoholic beverages were considered a luxury. Since the distillation process greatly reduced the amount of soju produced compared to other alcoholic beverages, traditional soju was ever more valuable. As a result, it was only consumed by the royalty and the nobility. Moreover, it was made specifically for jesa, traditional rituals to honor deceased ancestors, or else for important guests. Naturally, different families and different regions developed their own recipes. Alcohol was banned in Korea numerous times during the Joseon dynasty in order to reduce the demand for rice, but the popularity of traditional soju did not die down. Even King Yeongjo, who implemented the harshest prohibition rule, was rumored to drink traditional soju in secret. 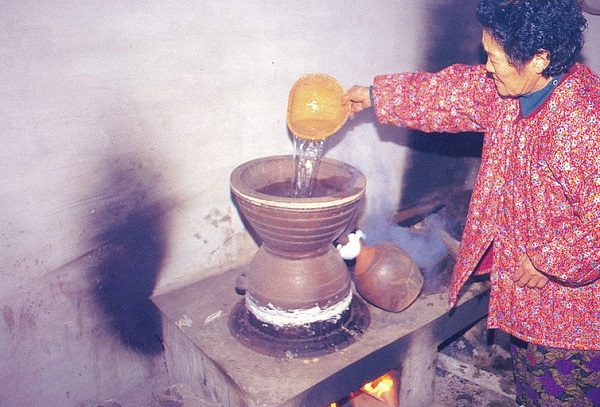 Gosori, a type of sojutgori used to distill soju. Starter (crude liquor) is placed in a pot, and the sojutgori is placed on the pot and cold water poured in. When the starter boils, soju flows into a second pot | 국가문화유산포털

The history of the hardships of traditional soju began from the Japanese annexation of Korea. In order to secure tax revenues, the Japanese colonial government imposed high taxes on alcoholic beverages and only allowed certain licensed people to produce liquor while strictly cracking down on homemade soju. Alcoholic beverage companies began to pop up during this era as people were forced to purchase liquor instead of making it at home. In this process, some companies began to produce diluted soju in effort to reduce production costs. While diluted soju also undergoes distillation, it is a different type of liquor than traditional distilled soju. The traditional type is made by distilling rice alcohol to improve the taste and fragrance and increase the alcohol content. Diluted soju, on the otherhand, is made by distilling alcohol brewed from starch materials, such as sweet potatoes and tapioca, again and again to produce ethyl alcohol with 85 percent alcohol content, diluting it with water, and adding sweeteners. As a result the taste and smell of the two types of soju differ greatly. Despite the entry of diluted soju into the alcohol market, distilled soju remained more common for a good while. Things changed in the 1960s, howvever, when the government banned the production of rice alcoholic beverages in order to control the demand for rice. Diluted soju made from sweet potatoes and tapioca thus came to replace the traditional type. Craftsmen who had been making distilled soju had no choice but to stop working. The ban was lifted in the 1980s, but by then the tradition of distilled soju had all but disappeared. 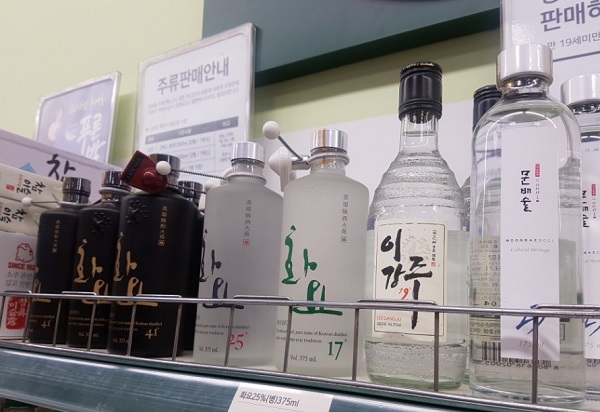 The alcoholic beverage section in a Korean supermarket. Large companies are diving into the distilled soju market.

Recently, however, the market for distilled soju has changed dramatically. The distilled liquor market in 2017 has been estimated to be more than triple the size of that of 2012 (source: National Tax Service). Large alcoholic beverage companies are scrambling to promote their own distilled soju. More people are appreciating the taste and fragrance of the drinks and the Korean alcohol market is undergoing much change. The number of single malt whiskey bars has increased from ten in 2010 to 250 in 2016 (source : Whiskey Society of Korea). The growth of the distilled soju market is following a similar trend. An increasing number of classy pubs and bars are offering distilled Korean soju, and there are even bars that specialize in distilled Korean beverages. With its clean taste and soft notes of gains, soju is once again widening its appeal to Korean consumers with a different charm from strong oak whiskey or odorless vodka.

Somdaeri  is specializes in Korean cuisine and has a regular column at Sommeliertimes.