— Effects of the policy are more tangible for non-office staff than office staff: “Our wages have gone down 20 to 30 percent on average”

— Policy was intended to support the poor, but paradoxically threatens their livelihoods most

It has been a week since “shortened work hours” were implemented in the labor market,[1] and certain companies are finding themselves in deeper turmoil. The switch to a 52-hour workweek is expected to decrease wages by an average of KRW 370,000, and it is forcing even full-time workers to get second jobs in order to support their families. Some non-office workers who used to get by through overtime and weekend work complain that “work-life balance” is only possible for office workers. A policy for people in poverty is paradoxically worsening the quality of life of those on the verge of poverty—the people in the lowest tier of the labor market. 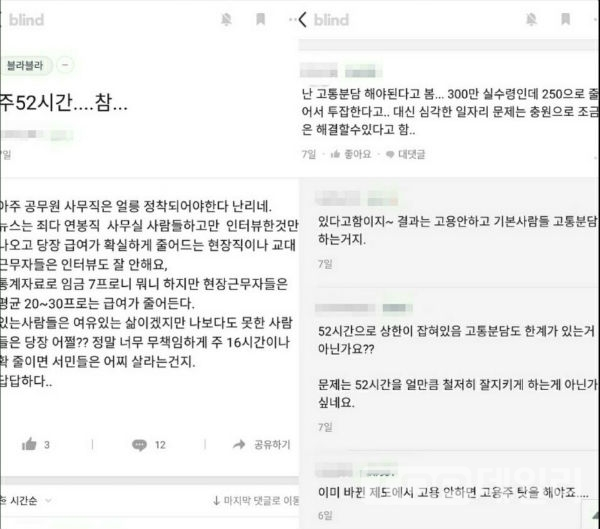 On July 7, a search for the key phrase “52 hours per week” on Blind, an anonymous community app for the workplace, turned up a number of results. Office and non-office staff in various occupations posted their opinions on wages and work environment. | Screenshot from Blind Workplace Community

On July 7, a search for the key phrase “52 hours per week” on Blind, an anonymous community app for the workplace, turned up a number of results. Office and non-office staff in various occupations posted their opinions on wages and work environment. Image=a captured image from Blind Workplace Community.

One person, who identified himself as a non-officer worker on Blind, remarked, “The media seems to be focused on the effect of the 52-hour workweek on salaried office workers.” He went on to complain, “A statistical study says that wages will only fall by 7 percent, but for non-office staff who are paid by the hour, the wage drop is an average of 20 to 30 percent, which seriously affects livelihoods.”

Top Daily reached out to five employment agencies in Seoul—in Gangnam, Yeongdeungpo, Mapo, and Yongsan—and learned that the number of inquiries about hourly jobs for nighttime and weekends has increased since June. A president of an employment agency in Gangnam explained, “Since June, when the news about the 52-hour workweek began to flood the media, we have been receiving many inquiries about part-time jobs over the phone or in person. They were asking about positions in various jobs, such as manufacturing, delivery, and construction, and it seems as though they are all trying to make up for the loss in income.”

As a result, the market for drivers-for-hire—known as the ‘cream of the crop’ part-time job for those already in full-time employment, is thriving in the crisis.

Online communities, such as “Drivers for Hire, Racing Through the Dawn” and “Driving for Hire, Drivers for Hire” recently saw a deluge of postings with experiences of working two jobs, inquiries about reduced insurance premiums when working two jobs, and questions about how to start working as a driver-for-hire. Last month, 110,000 people registered as drivers on Kakao Driver, an app that connects customers with drivers for hire; this was an increase of 30,000, year-over-year.

On July 7 and 8, this reporter posted a message on one of these communities, asking whether there were full-time workers who were also working as drivers for hire. Seo (42) replied to the message. A father of two daughters, he explained that he was an excavator operator. “Since most construction work is available in spring, summer, and fall, I have to work hard during these seasons,” Seo said. “And my children are growing, so I’m worried about our livelihood. My monthly wages were cut about KRW 500,000, so I started working as a driver for hire after work.” He added, “It wasn’t easy to find customers when I first started out. Then someone at the internet community introduced me to a cab driver, and now I’m ‘taxi shuttling’.”

Kim (32), who is expecting to be married soon, works both in construction and as a driver-for-hire in downtown Jongro-gu, Seoul. After finishing company work at five, he grabs a small dinner at a nearby convenience store, and works from 8 pm to 1 am to make KRW 50,000. His monthly wage was cut by about KRW 400,000 after the 52-hour workweek was implemented, so he’ll work as a driver-for-hire for at least four days a week to make KRW 1 million per month until his wedding day in November. Kim’s break time lasts four hours, including sleep time. That is five less hours to rest since he took on a second job.

The impact of the shock from the 52-hour workweek varies by company size. Most office workers at conglomerates currently avoid violating the 52-hour workweek policy by working flextime. SsangYong Motor changed the shifts for its manufacturing employees from a one-day, one-night shift system to a two-day shift system, removing the overnight shift. This reduced the average working day from 10.25 hours per worker to 8.5 hours. CJ Group and Lotte Group adopted the “PC Off (shut down)” system and enforced a policy preventing supervisors from sending work orders through messenger apps after work hours.

The problem, however, is at small and medium-sized companies. The financial sector forecasts serious chaos in 2020, when the 52-hour workweek will be implemented in businesses with 50 to 299 employees. One employee at a metal processing company in Sihwa Industrial Complex said, “Since productivity of smaller companies is tied to supply changes at large companies, they have to be ready to deliver bulk orders immediately, as soon as a request comes in from a big company. On some days, we have turned off all the lights at our company and worked at a nearby cafe.”

But workers disagree. They are skeptical of the ministry’s forecasts and expect that companies will increase their workloads rather than hire additional workers.

On June 25, a mobile research company conducted an open survey of 500 workers (250 women and 250 men) in their 20s to 50s. According to the survey results, 64.8 percent of the respondents (61.6 percent men and 68 percent women) answered that they do not believe companies will hire additional workers. In terms of job categories, office workers (67.9 percent) were most skeptical about companies expanding manpower. This demonstrated a wide gap between the government’s expectations and the atmosphere among workers.

On July 6, a KEB Hana Bank employee posted on Blind: “They’re telling us to get off work early, but the workload is the same and the bank is not hiring more workers, so I have to work at home after work. At least I was paid for overtime before. Now it feels like I’m doing volunteer work.”

In a phone call with Top Daily on July 9, Joo Won, a board member of Hyundai Research Institute, commented, “Even before implementing the shorter work hours, there were predictions that it would be more difficult to apply the 52-hour workweek for staff working outside of offices. Non-office positions require more people for machinery, facilities, and production, and smaller companies will have more difficulty, by definition. The Ministry of Employment and Labor needs to provide incentives to non-office staff, such as tax benefits, to prevent decreases in productivity.”

CHOI Eun-ji  is a politics and national news reporter at Top Daily. She previously worked as a Korean teacher at a private middle school for three years and remains very interested in social and educational issues. Reach her at ejjs@topdaily.co.kr.