Architecture creates the modern urban landscape. The apartment complexes that have taken over parts of Seoul and the super high rise combinations of commercial and residential facilities are impossible to overlook. A glance through the Korean history of buildings created by world-class architects might lead you to the publicly-funded Dongdaemun Design Plaza of Zaha Hadid, who was criticized in all the usual ways for a celebrity architect only to become an object of sympathy after her sudden passing. But there is no doubt that commercial facilities are at the frontlines of urban architecture—office buildings in particular. This is a theme of the capitalist system that cannot be denied.

In Western cities, the city archetype since the Industrial Revolution, corporate architectural design has radiated a constant, unmistakable presence. For instance, the Chrysler Building, completed in 1930, maintains an iconic presence in the New York City to this day. And the 1958 Seagram Building, designed by Mies van der Rohe and Philip Johnson in celebration of the 100th anniversary of a whiskey distiller, began the trend of the ‘Seagram style’ curtain wall facade which still dominates the urban landscape over half a century on. And how about the presence of the CCTV Building? Designed by OMA’s Rem Koolhaas, this has become an iconic building of Beijing and the rest of China. International corporations, with economic systems that now rival those of nations, are beginning to use architecture as a means of creating their own worlds. The series of ‘campuses’ for Facebook, Google, and Apple, for which Steve Jobs used his red pen for the last time, are ‘new cities’ that reflect the desires of companies that dream of becoming ‘microstates’. 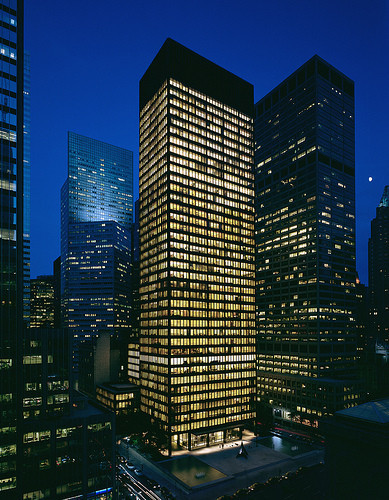 On June 14, Amorepacific, the largest cosmetics company in Korea, officially debuted its new headquarters. This new ‘hall of beauty’ connects directly to Sinyongsan (subway) Station and was an ongoing landmark project of the the last decade that repeatedly found a way to pique the curiosity of the architecture community just as it was beginning to slip from the public consciousness. The construction of the building was first planned in March 2009, and the final design was selected through a design contest in July 2010. The construction of the headquarters, valued at north of KRW 500 billion, went to David Chipperfield. A renowned master European architect, Chipperfield is British but his main office of over 200 staff members is located in Berlin, and his main portfolio covers the UK and Germany. His idea presented a completely different kind of shock through Korean society than the overwhelming ‘sensuality’ of the DDP, designed by the ‘Queen of the Curve’ Zaha Hadid. 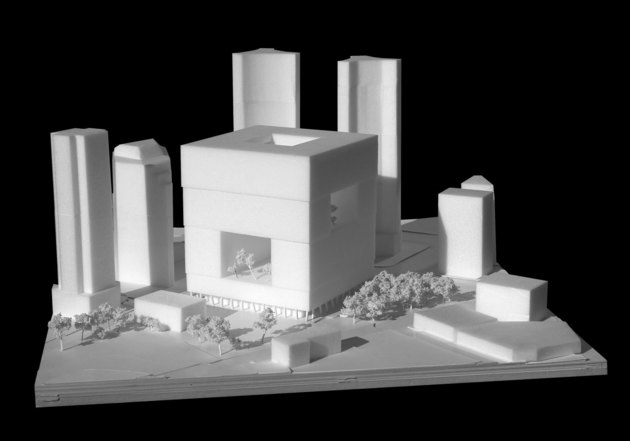 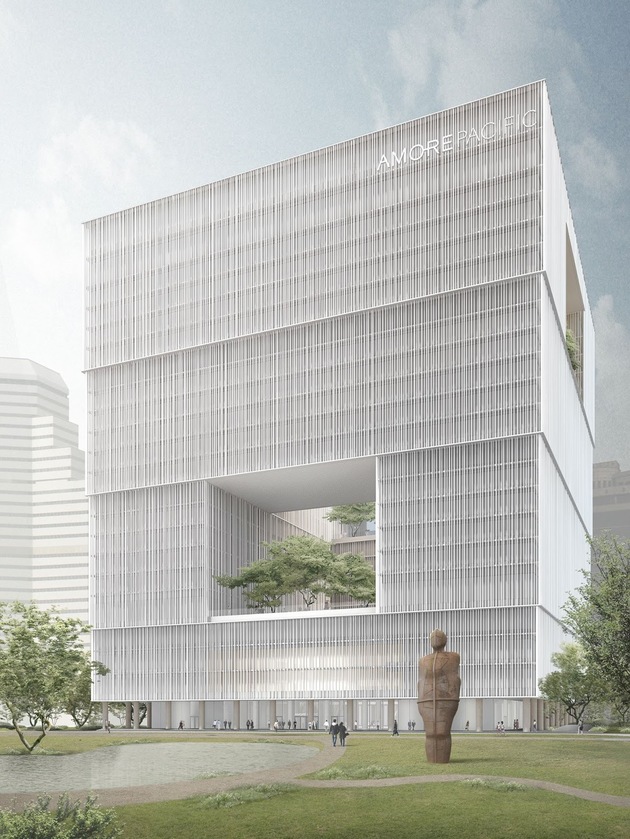 That a new corporate headquarters built on a precious plot of land in Sinyongsan reaches only 22 stories is a surprise in itself (surrounding commercial-residential complexes rise to over 40). But even more remarkable is that the center (1/9 of the potential office space) of the imposing hexahedron has been cleaned out and replaced with a vertical courtyard, with three additional sections removed for huge floating gardens that bring nature into the building. This design was considered an “uneconomical plan” that would never be understood in the Korean finance community, the life of which depends on the creation of skyscrapers that make the most of their allotted space. Even the architecture community deemed it a building never to be repeated. The mass curiosity around Suh Kyung-bae’s judgment in selecting its design and its utopian (or dystopian) future was therefore inevitable. Designs usually change and twist endlessly during the construction process. Yet the construction of the new Amorepacific headquarters progressed in silence until its completion in the winter of 2017. And to widespread surprise, the building that appeared in the middle of Seoul was an exact doppelgänger of the original design. 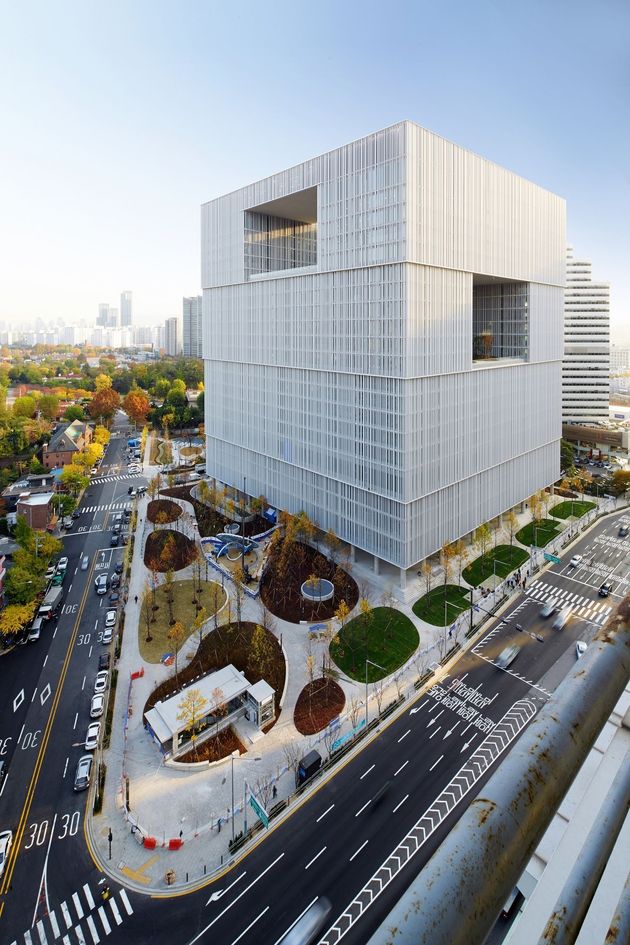 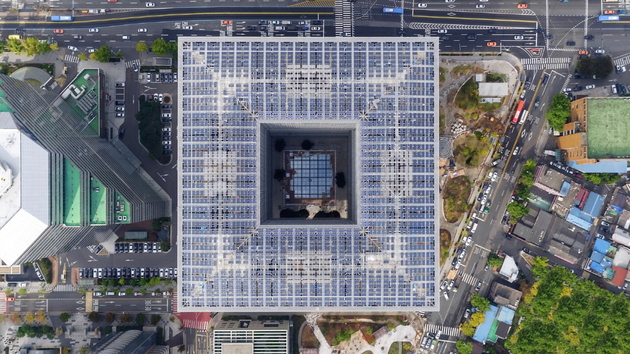 The view of the new AP Headquarters from the sky. The bold courtyard is impressive | David Chipperfield Architects 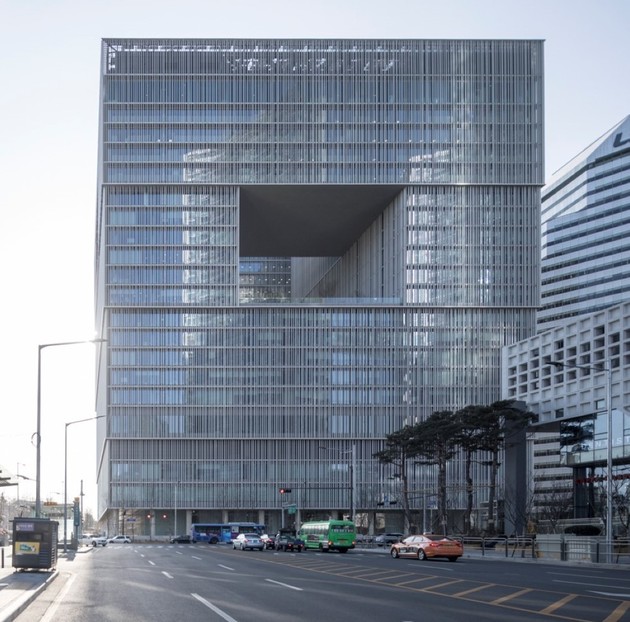 The view of the new AP Headquarters  | David Chipperfield Architects 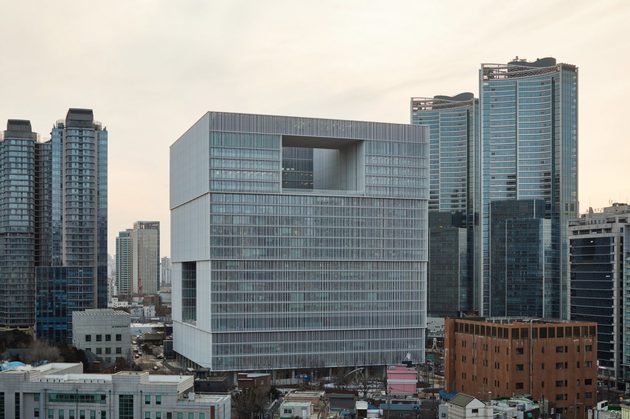 The philosophy of the new Amorepacific Headquarters is ‘maximization of connectivity’. When the US Army Garrison in Yongsan is relocated and replaced with the enormous Yongsan Family Park, Amorepacific’s new headquarters will become a ‘pedestrian hub’. Connectivity seems like a strange philosophy to have for a company headquarters, which is designed for a company, but it became an architectural reality in this building. People can access the headquarters through the food street on the basement floor or the main entrances on the four identical sides of the building. And access isn’t the only thing. People can walk straight through the whole building or stay inside depending on their needs.

A company building where it’s normal to see people roaming the first floor without a company badge. People can look at the ‘hip’ building in Seoul, visit an art museum, eat at one of the many restaurants, and stay cool on a hot summer day. Moreover, the natural light that pours in from the three story-tall light well helps people synthesize their vitamin-D. The lobby of the new headquarters is like a European plaza brimming with a diversity of people, as is the space in the building for employees and executives. All of the floors are directly connected through stairs, and the floating gardens let people access nature in its own form with trees, water, the smell of earth, and fresh air. In addition, connectivity is not limited to people who physically visit the building. This cubic building—quintessence of the pure aesthetics of white Joseon porcelain, particularly the moon jar—glows softly day and night, visually connecting with those who observe the building from afar. The embrace of the four sides of the Amorepacfic by the mountains, gardens, the Han River, and high rises is a novel sight, and it is a part of the 2018 Seoul Promenade that is worth a try. 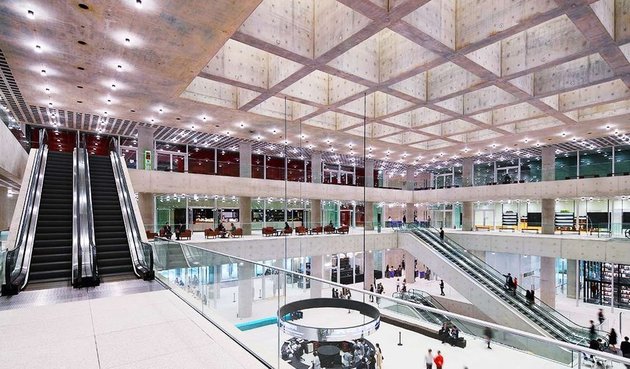 An impressive, open interior. There is a ‘light well’ in the center of the ceiling | David Chipperfield Architects 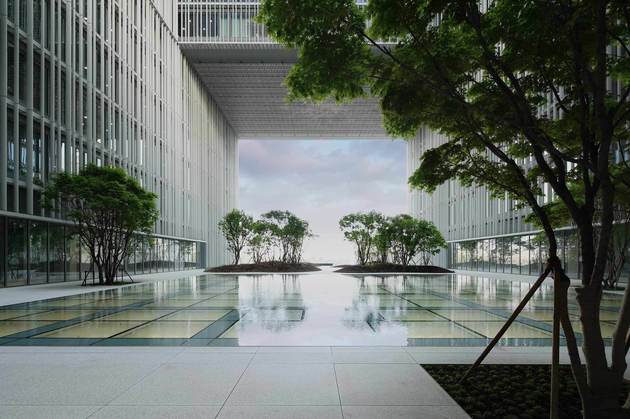 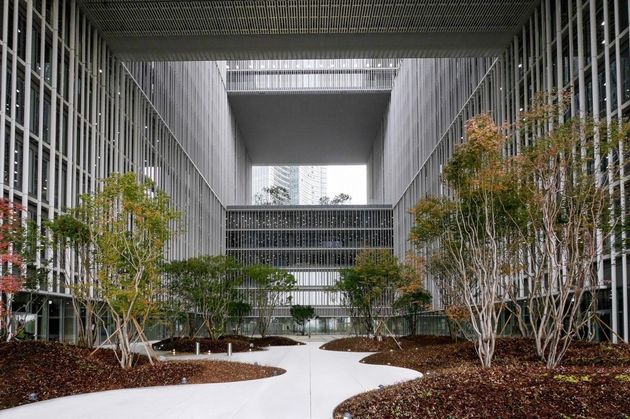 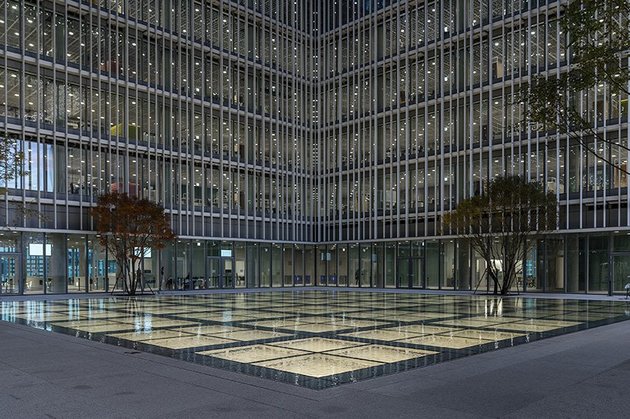 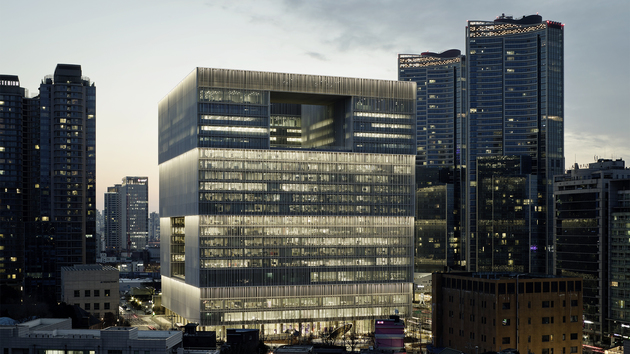 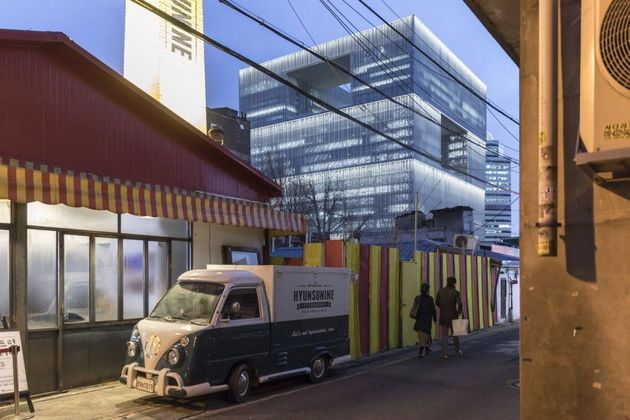 A view from a side street | David Chipperfield Architects 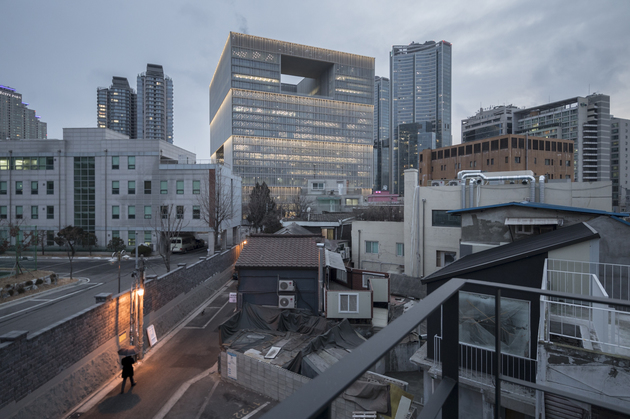 The new AP Headquarters blends in well with the surroundings | Amorepacific

Now, at this point, I have to ask this rather mysterious question. Who is the owner of the new ‘hall of beauty’, the house of Amorepacific? Since it is a corporation, are the true owners of the building the shareholders? Or is it the CEO who proposed the vision of the company, oversees its business, and decided on its design? Or the architect who brought the building from nothingness to somethingness? Or the workers who actually occupy the building for most of the day? Or the local community that makes the building fulfill its intended role in the modern city? Or all the people who experience it visually from afar, nestled within the urban landscape? Or should we invoke that magical community “the residents of Seoul”, seeing as the building was conceived in this city? The new Amorepacific Headquarters brings up more and more questions the more I think about it, but one thing is for sure: the existence of this building is unparalleled in the way it makes us think about the share of all the connected groups of people, rather than the monopolistic ownership usually associated with corporate buildings. Have there been other such buildings in Seoul? The hero of the monumental architectural narrative that everyone had thought impossible has finally unveiled itself to us. 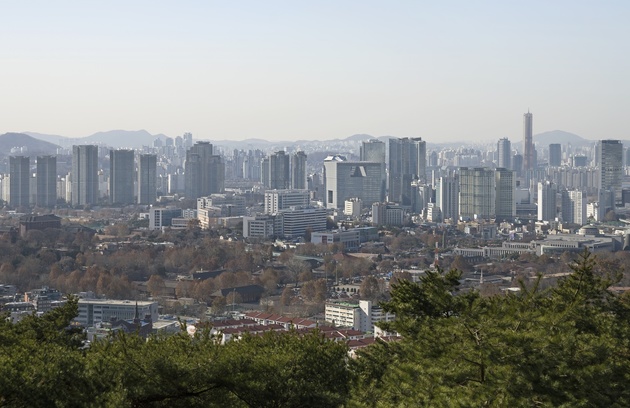 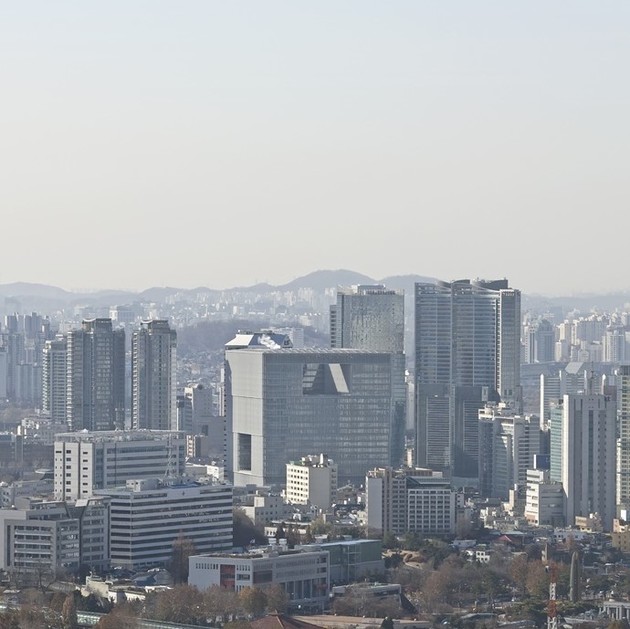