The taxi industry held three protests against carpooling in October. The largest was the national protest held in Gwanghwamun on October 18. Over 60,000 cab drivers filled Gwanghwamun Square. They became more unified but their cause did not reach the general public. They presented no other argument than the ‘right to live’ and ‘struggle’.

Some believe that the protests was counterproductive. On the day of the protests, the carpool service PoolUs and passenger van-based ride-sharing service Tada received approximately 2.5 and 6 times more calls than usual. That same day, the number of PoolUs drivers was ten times higher than the previous day. It seems that interest in new mobility services has increased as an alternative to the cabs that have partially stopped providing service.

The public still has a favorable opinion of carpooling as well. According to the results of Real Meter’s survey on carpooling announced on October 22, 56 percent of respondents favor carpooling while 26.7 percent oppose it. In particular, 70 percent of office workers, who are seen as likely carpooling consumers, favored such services.

It seems that it will now be difficult to stop the introduction of carpooling services to Korea. The government’s policy also seems to be heading toward relaxing related regulations. To soften the blow, the government has only mentioned phasing the service in slowly. On October 21, Hong Young-pyo, the floor leader of the Democratic Party also said, “The introduction of carpooling service should be phased in for the taxi industry to accept it.” On October 23, the taxi industry released a statement criticizing Hong’s remark as a “complacent perception”. 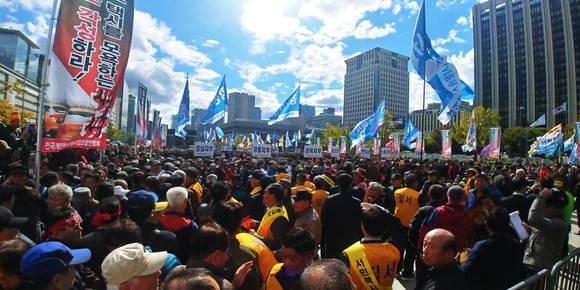 “If carpooling services recruit two million drivers and 80 percent of them drive twice a day, about 59 percent of a cab’s daily performance (5.38 million rides) will be eaten up.” These figures were put forward by the carpooling opposition emergency response committee, organized by four major taxi companies in Korea.

The general interpretation, however, is that two million carpool drivers is a considerable overestimate.

According to Statistics Korea and the Seoul Metropolitan Government, there were 22.5 million registered vehicles in Korea at the end of 2017. Of these, the cars with the highest potential for carpooling services are in the Seoul area because of the lower population density in other regions. (PoolUs has regularly offered coupons to promote its services in other regions, but with little success.)

The number of cars registered in Seoul is about three million. This number decreases to about 2.5 million when you subtract the freight cars, company cars, and special cars that do not qualify for carpooling. Kakao’s carpooling service excludes sub-compact cars, compact cars, rented cars, and any car that has been registered for seven years or longer. Currently, compact cars represent less than 10% of all registered vehicles and about 30% of cars are over ten years old.

While some of the exclusion criteria may overlap, it is clear that they rule out a significant number of cars for carpooling services. Furthermore, even among the eligible cars, extremely few would actually participate. This can be seen from the number of drivers who signed up for PoolUs and Luxi. According to the industry, there are only about 50,000 carpool drivers, and even fewer active ones.

Carpool drivers say, “We’re not in this for money.”

There is a counter argument that things might change if an IT giant like Kakao, instead of startups like PoolUs or Luxi, jumps into the carpooling service.

This is a reasonable point. Kakao’s T platform has 20 million members. Unlike other companies, Kakao does not need to promote their service to attract users. Over 100,000 people downloaded the app within a few days of the announcement for recruiting carpool drivers. This is a huge achievement.

But we cannot say that everyone who downloaded the app applied to be a driver. And it is even less likely that those that did apply are now working steadily.

For every five kilometers in a taxi, customers have to pay about 5,500 KRW. Since current rates for carpooling services are about 70 to 80 percent of taxi fares, carpool customers pay about 4,000 KRW for the same distance. When you subtract the 20% fee and 6.6% tax, drivers make about 3,000 KRW per ride.

This is only the case, however, when the rider’s pickup and drop-off points roughly match the driver’s starting point and destination. Otherwise, the driver has to travel further to pick up the rider, which costs additional fuel and time. While taxis in Korea are fueled by LPG, cars are fueled by petrol or diesel, which costs more. Additionally, owners of more expensive cars have to consider depreciation costs.

A considerable number of carpool drivers responded that their objective is “not profit but joy”. They see carpooling as a means of finding someone to talk to on the way to and from work. Thinking of trying to actually make money out of it would just add to their daily stress. It is a fact that the majority of carpooling revenue in 2017 came through incentives that service operators provided through non-fare promotions. This is not a sustainable model. When the incentives were reduced due to the financial difficulties of carpooling services, a considerable number of drivers left the services.

The same is true for riders as well. Although many people aren’t satisfied with taxi services, whether or not a carpool rider is matched with a driver they enjoy is also hit or miss. Riders might feel uncomfortable with having to ride in the front passenger seat instead of the backseat, or being matched with drivers of the opposite sex. If either the rider or the driver is rude, the carpooling experience leaves only bad memories for both. Also no one would wait for carpool matching instead of hailing a cab in urgent situations. And there are cases of drivers not showing not showing up or going off the grid.

People who are looking to carpool are those who are interested in meeting new people despite the above problems or those who have no choice but to try it because they are in an area or time time of day when it is difficult to find a cab. This is the reason why there is less overlap between taxis and carpooling services than we think. From the customers’ perspective, it is not carpooling services but VCNC’s van-based ride-hailing service Tada that could replace cabs.

So why are taxi drivers so hung up on Kakao carpool?

The protests organized by the taxi industry did not have a huge effect, and it seems unlikely that they will have much effect in the future either. Cab drivers were unable to rally public support to their cause through the three protests. And the protest rallies themselves seem to have been organized by leaders rather than by cab drivers. The drivers this reporter met at the rallies were angry, but only a few were aware of the specifics of the situation. Some were genuinely surprised to learn that carpooling services have been available from companies other than Kakao.

The focus of the protests was not carpooling; rather it was on what the taxi industry can gain by opposing it. Taxi drivers who work for taxi companies suffer from long work hours, high commission, and low income. Taxi companies therefore struggle to find enough drivers and leave half of their vehicles idle. Drivers who own their taxis, meanwhile, are worried that the prices of the licenses they purchased for nearly 100 million KRW might plummet. They have no leverage. Whether they are standing up against Kakao or the Korean government, they will only get to the negotiating table when they have something to bargain with.

The most mentioned topic at the rallies was fare increases. Both the taxi drivers and the heads of taxi companies said the same thing. Compared to other countries with similar living standards, Korean fares are certainly cheap. The starting fare has been at 3,000 KRW since 2013. There has been talk of increases in Seoul as well as in other parts of Korea, but nothing has been confirmed yet. Another way is to have the mobility industry create a fund with some of the revenue. In fact, Uber is obliged to pay for taxi development funds in some countries.

“If the job becomes profitable, the quality of drivers will go up, fewer and fewer drivers will refuse customers, and services will improve”, explained one taxi industry worker. “Furthermore, if price liberalization becomes possible, we can provide other services, such as call buses, to reduce difficulties in hailing cabs.” He also explained that creating taxi stations in certain areas would help reduce the number of drivers who refuse passengers service. Of course, it is possible that these measures will increase taxi company profits and fail to improve service quality or the quality of life of drivers. Therefore it is necessary for the taxi industry to establish clear and specific improvement measures internally as well.

The taxi industry’s greatest fear is the possible operation of Uber-like carpooling services. Conflict between carpooling services and taxis started when PoolUs introduced flexible hours last year. There are reasons to adopt 24-hour, multi-trip carpooling as well. People start and finish work at different hours, and there are people who also go to work at companies or logistics centers in the middle of the night. Long-distance commuters can also pick up two or three riders per trip. All this is legal under the current law.

Unfortunately, as of yet there is no way to identify the loopholes that drivers use. If we can’t prevent carpool drivers from working full time, all of the measures discussed become meaningless. ‘Flexible time’ drivers have to register for designated time periods, but they can get around this by using several carpooling apps together. They can also increase the number of rides in the same way.

During the daytime, there are a lot of taxis that are looking for customers. So far, because of costs and technical difficulties, carpooling companies have not filtered out ways people can use the services for something other than carpooling. In doing so, they have partially fueled the taxi industry’s protests against them. Kakao Carpool is expected to officially launch within the year. And when it does, it needs to have these problems resolved. It’s important for Kakao to demonstrate that their carpooling service is not a simple smartphone ride-hailing service.