Channel 11, MBC. To me this channel is not just another broadcaster. It’s an old flame. I spent my childhood in the late 90s and early 2000s watching the “Drama Kingdom”, the affectionate nickname for the channel back then. From the traditional period dramas that led the Korean wave like Hur Jun (1999-2000, 63.5% viewer rating) or Dae Jang Geum (2003-2004, 55.5% viewer rating), to the sitcom Three Guys Three Girls (1996-1999, 36% viewer rating)—the Korean equivalent of Friends—the cultural content that dominated my teenage sensibilities all aired on channel 11.

In those days television was the only medium through which I could encounter the world, and the Munwha Broadcasting Company was irreplaceable. The parade of News Desk anchors—Sohn Suk-hee, Ohm Ki-young, Baek Ji-yeon, Kim Ju-ha—were icons of trust (though today they have all gone their separate ways) and the channel’s investigative journalism had a huge impact. PD Notebook and Now We Can Tell hurled stones against the establishment. From the history of the Korean military regime to the impenetrable legend of Hwang Woo-suk, anything was fair game. Whenever I watched them cast doubt on what we had never thought to question, my heart raced. It was only natural that I began nursing a wish to work in broadcasting one day. And my first choice was unquestionably Ma Bong-choon[1], MBC.

In my last year of university I took the MBC employment exam. The acceptance ratio was easily less than 1 in a 1000 and I was quickly rejected. But I did get accepted to a newspaper agency I’d applied to at the same time. The company was known to lean conservative. There, I met nicer colleagues than I deserved, and experienced what a fresh graduate rarely gets the chance to. Really, everything was perfect except for one thing—the fact that I had to introduce myself as a reporter from __ Ilbo. At the time I tried hard to separate myself from my title as a __ Ilbo reporter. I resisted accepting the identity of a reporter working for a conservative newspaper financed by big capital. I hated that __ Ilbo, rather than my individual personality, overshadowed people’s first impression of me.

MBC, on the other hand, was a name I would eagerly embrace. MBC is both a state and a commercial broadcasting company. Its management structure is public but the profit-making structure takes on commercial characteristics. Among the three television stations, MBC stood at the ambiguous space between the state-run KBS and the purely commercial SBS, and for me this was appealing. MBC’s image at the time was neither stiff nor sentimental.

I too had unshakable faith in this image. And I thought if I could just work for MBC I could take on their image. I’d become someone who produced righteous, modern and creative content. When I got accepted to MBC on my second try, I shed tears of joy at the reporters’ office. My job at the newspaper agency was decent, but a “decent job” wasn’t what I wanted. All I wanted was MBC. Looking back, I think it was something more than the usual job seeker aspiration. I knew that I would probably lose that initial excitement eventually, that first love. But I could never have imagined that it would be MBC, and not my own heart, that would change, and not to this degree. Nobody could have foreseen what MBC has become today.

My first memory of employment at MBC is picket signs. My task was to hold small hand-written signs and stand at the lobby at the beginning and end of each work day. The PDs (production directors) held frequent emergency meetings to address the regular cancellations of their long deliberated content by the higher-ups. The PDs were accustomed to a culture in which they had the autonomy to select topics and assume the accompanying responsibility. This new culture was bewildering.

It has become commonplace now, but the first ever cancellation of an investigative report happened with PD Notebook in 2010. The episode dealt with the Four Major Rivers Project, the most hotly debated issue of President Lee Myung-bak’s administration. The Six-Meter-Deep Secret of the Four Major Rivers was pulled by the company president the day it was scheduled to air. Given the MBC culture of the day, it was unthinkable that the president would directly intervene on a piece of programming. It was common sense that the ultimate authority and responsibility for a program fell to the bureau chiefs. The news bureau chief was responsible for the news bureau, and the drama bureau chief for that bureau. This “bureau director responsibility system” had been established in the late 1980s to ensure the freedom of broadcast production. In effect it devolved authority and responsibility away from the government-appointed company president to the bureau chiefs.

This “bureau director responsibility system” was abolished shortly after, along with the “bottom-up evaluation system” in which lower level employees evaluated their supervisors. The company justified this decision as management consolidation. Bureau directors and officers were replaced and employee morale plummeted. In one instance, a department head even ripped up a PD’s proposal. In addition to my regular production work, I was busy transcribing minutes in emergency meetings and standing in the lobby each morning to picket. Whenever senior colleagues gathered, they shared stories of outrage and sighed. A culture that once espoused autonomy and creativity as the highest virtues quickly turned tense. Ultimately, MBC staged a strike. This was five years ago, in 2012. 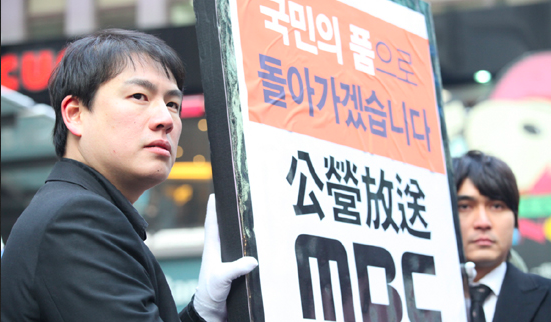 A mock funeral demonstration during the 2012 strike | Media Today

The strike started in January and continued until July. Each bureau participated, suspending operations. Public opinion at the time was still positive. People encouraged us in the streets and shared in our outrage. The union office was filled with coffee and pastries from well-wishers. A strike concert held at Jangchung Gymnasium was attended by over 3,500 ordinary citizens.

This was my first ever labor strike. I knew that strikes were not rare at MBC and I viewed the option to strike as a privilege unique to MBC employees, given the hostility to the freedom of the press.[2] Still, going on strike was not easy. No employee wants to strike. Especially not if they enjoy their job and care about their company. I loved my job and wished MBC the best. Yet I joined my colleagues because I felt a dire need for change—things could not continue as is. Striking didn’t mean I got to stay home, though. I was on the streets day in day out, handing out flyers and getting signatures. There was no telling how long we’d have to chant slogans in the streets without regular pay.

And yet I was able to bear it because I believed in the justice of our demand. Legitimacy was our weapon. We were asking for nothing more than the right to produce impartial broadcasting. KBS, YTN and Yonhap were in similar situations so they joined us with their own strikes. We handed out tracts and asked for signatures in the most obscure neighborhoods. We produced and distributed video shorts promoting our cause, and orchestrated flash demonstrations in Yeouido, Myeongdong and Seoul Station. It was much more exhausting than my regular work.

April came and other companies ended their strikes. Only MBC held on, for three more months. On July 17, 2012, we gathered at Yeouido MBC D Studio to declare an end to the strike and return to our positions. 170 days of strike. The unprecedentedly long strike came to end because candidate Park Geun-hye, the then frontrunner of the presidential election, promised to take care of the MBC issue if elected. But, as we all know, the promise was never kept.

Five years have passed since the strike. Most of my senior colleagues who led the union strike have been fired. In 2015, a second-year PD in the entertainment programming bureau was dismissed for uploading a webtoon about the company’s situation. The grounds for dismissal were simply defamation.

Defamation… Does MBC have any reputation left to defame? After the strike the situation deteriorated fast. Besides those who were dismissed, about a hundred reporters, producers and news anchors were relocated to departments unrelated to media production. Seasoned PDs were reassigned to manage the company’s skating rink or production equipment storage, or to branches far removed from Seoul. Reporters who should have been roving the streets were tied up in non-news departments. The company replaced them with mass hiring of strikebreakers.

Somebody once compared MBC to a prison. Those who have the means try to escape. Many in entertainment, drama and news bureaus quit to become freelancers or work for tvN or other cable networks. Most of us who stayed behind spend our days in resignation and despair. In the rare times we dare speak of hope, we keep our voices low. Unspoken rules have emerged in the five years since the strike. Criticize the company and you are dismissed. Dare go on a strike and you are replaced by strikebreakers. Those of us who stay are plagued with guilt and get used to keeping our mouths shut. We have even gotten used to a new nickname: Embingshin (a play on byeongshin, a hate slur against people with disabilities). At the candlelight protests last winter, reporters had to remove the MBC labels from their cameras and microphones because of the strong hostility.

Members of the public insult MBC reporters with the hate slur embingshin during the 2016 protests.

What exactly happened to MBC? It became unrecognizable in just six or seven years. Watching the transformation has left me scarred. I mourn and rage at the company affairs like they are my own. And I’m not alone in this. Everyone—whether they left of their own accord or were dismissed—carries their own wounds.

With all that said, back to the Broadcast Charter

What kind of future awaits MBC? The Media Control Prevention Law—essentially a reform of the management structure of public broadcasting companies—failed to get through the provisional National Assembly this February. Unless the current management structure changes, the tragedy of MBC will continue in the new administration. And even if the law does pass, any improvements to MBC will be a long time coming. The changes to the internal personnel over the last few years run too deep.

But I cling to the last bit of hope because, again, I still love MBC. And I find myself dreaming the impossible. For the reinstatement of our dismissed colleagues, the recall of our displaced staff, and the return of our dismantled bureaus to the organizational chart. A dream fueled by affection. A belief that MBC will one day regain its place in the nation’s hearts. Though if I’m honest, maybe believing this is my only way of surviving.

Now, I want to end this long article with the MBC Broadcast Charter. The words might seem clichéd, but the longer I mull them, the more they feed my soul.

“We swear to remember that the citizens of our country are the owners of our broadcasting company, and to contribute to the social public good and the citizens’ rights by producing honest press coverage and wholesome cultural content. We swear to honor human rights, protect social justice and democratic order, and commit to impartial and fair broadcasting that reflects the views of each social segment…. We swear, based on the principles of autonomy, freedom, and responsibility in organization, reporting, and production, to become an open and participatory broadcasting company that serves the citizens’ right to know. We swear to honor our profession of social and cultural contribution through swift and accurate reporting and dignified programming, and to examine ourselves against clear and rigorous moral principles to carry them into action.”

Anonymous  is an employee at Munhwa Broadcasting Corporation.