The post of Commissioner of Statistics Korea has been under the spotlight. On August 26, Cheong Wa Dae dismissed Hwang Soo-kyeong from the post and appointed in her place Kang Shin-wook, an income redistribution expert and senior researcher at the Korea Institute for Health and Social Affairs. Although the change was in line with a cabinet reshuffle, voices of criticism arose not only from Statistics Korea but also from within and outside of the government that it was a “foolish measure that damaged the fairness and neutrality of national statistics”. The household survey statistics, which are at the heart of the controversy, are scheduled to be restructured by Statistics Korea, and the conflict is heating up. What exactly are the household survey statistics and why was the change controversial?

All this started from the household income statistics. The full title of the report in question is ‘Household Survey, Income Section’. In May, these statistics showed that in the first quarter the household income for the low income class fell by the largest quarterly amount ever and the income distribution index worsened compared to the previous year, sparking a debate regarding the effects of income-led growth policy. The statistics were much disputed when President Moon announced that increasing the minimum wage had positive effects for 90 percent of workers, based on the data from the Korea Labor Institute and the Korea Institute for Health and Social Affairs, which reworked the above statistics.

The controversy reemerged after the income distribution index for the second quarter recorded the worst performance since 2008. According to the ‘Results of the Household Survey, Income Section, Second Quarter’ announced by Statistics Korea on August 23, the income for the lowest 20 percent of Koreans was KRW 1,324,900, which was 7.6 percent lower than the same period of the previous year. Although the drop was less than for than the first quarter (8.0 percent), it represented the worst decline for a second quarter since 2003. The major culprit was found to be the decline in employment. This triggered widespread skepticism regarding the income-led growth policy: the job losses and heightened wealth polarization were seen to stem from the sharp increase in minimum wage. The year-on-year increase in the number of newly employed had remained around 100,000 for five consecutive months from this February but fallen to 5,000 in July.

Did the government and the ruling party bring the controversy upon themselves?

The ‘Household Survey, Income Section’ was originally scheduled to end after the final quarter of 2017. Statistics Korea has surveyed household income every three years since 2005 using updated samples of 8,700 to 9,000 households. But problems arose—lack of response from the high-income class and accuracy issues with the statistics—and, at the end of 2016, the government decided to end the survey in 2017. In 2017, the size of the sample was reduced to 5,500 households and the results of the surveys for the first three quarters were not announced, as the year-over-year comparison in household income was deemed not relevant due to the huge changes in samples and survey methods. However, when the results of the household income survey revealed that real household income rose by 1.6 percent in the four quarter compared to the same period in the previous year, which was an improvement for the first time in eight quarters, the government suddenly decided to announce the results. At the time, Kim Dong-yeon, Minister of Economy and Finance and the Deputy Prime Minister, cited the results of this survey numerous times, mentioning that he “considers it very positive that the income distribution index has improved for the first time in eight quarters”. The ruling Democratic Party also earmarked a 2018 budget out of the blue during the budget deliberation process in November 2017, declaring, “It is necessary to conduct household income surveys in order to study the effects of the income-led growth policy.” This is the reason that many claim that the government and the ruling party brought the current “controversy over the household income statistics” upon themselves. 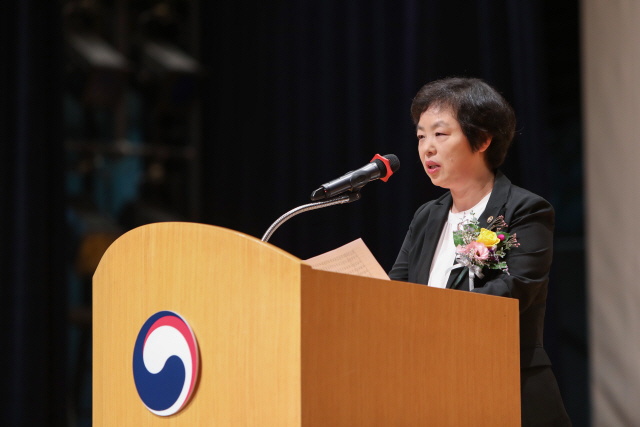 Hwang Soo-kyeong, former commissioner of Statistics Korea, making her farewell speech at the government complex in Daejeon on August 27. Shedding tears throughout the farewell ceremony, Hwang remarked, “I did my best to prevent statistics from becoming a political tool.” After the ceremony, she said, “I don’t know why I was replaced. I didn’t always do as I was told.” | Statistics Korea

Hwang Soo-kyeong, former commissioner of Statistics Korea, is making her farewell speech at the government complex in Daejeon on August 27. Shedding tears throughout the farewell ceremony, Hwang remarked, “I did my best to prevent statistics from becoming a political tool.” After the ceremony, she said, “I don’t know why I was replaced. I didn’t always do as I was told.” | Statistics Korea

The commissioner could not support income-led growth. Is that why she was replaced?

Thus the household income statistics survived. And when the results had deteriorated along with the results of the employment index, the commissioner of Statistics Korea was suddenly replaced, three days after the household income statistics for the second quarter were released. At the farewell ceremony on August 27, former commissioner Hwang shed tears, saying, “For the past year and two months, I served as the commissioner [of Statistics Korea] without huge errors. I did my best to prevent statistics from becoming a political tool, because that was the right way to help national statistics gain people’s trust.”

Generally, commissioners of Statistics Korea serve for about two years, so when Hwang was replaced after 13 months without a particular reason, some suspected that ‘Cheong Wa Dae replaced the commissioner to construct statistics that support income-led growth’. In an interview with a press company immediately after the farewell ceremony, former commissioner Hwang was asked the question of why she had been replaced. She said, “I don’t know. It was decided by the person in charge of personnel (at Cheong Wa Dae).” She added, “In any case, I didn’t always do as I was told (by Cheong Wa Dae and others).” Hwang never failed to abide by the current Statistics Act, which stipulates that newly produced data from Statistics Korea should not be shared even with the president prior to noon on the day before the date of public release. Also, she apparently remonstrated with Cheong Wa Dae about its complaint that Statistics Korea did not explain that the deterioration of this year’s household income distribution was due to the changes in sampling methods and scale. She argued that even with the same samples and the same composition of households by age group, various simulations still produced a considerably lower income quintile share ratio, which is an indicator of income distribution. For these reasons, Cheong Wa Dae complained that “Statistics Korea doesn’t cooperate much”.

Kang, the new commissioner, was a former senior researcher for the Korea Institute for Health and Social Affairs and had studied income distribution for over a decade. He had also been the first to sow doubt regarding the current household survey. These facts raised the suspicions around his appointment even further. Then, in May, after analyzing the results of the survey for the first quarter, he recommended that Cheong Wa Dae “change the survey method”.

With increasing concern over “the government’s pressure on statistics”, newly appointed commissioner Kang of Statistics Korea met with reporters at the Government Complex in Sejong on August 29 and emphasized that he will “report and respond to [statistics] only based on surveys”. In regard to the household income survey, he explained, “Something that looks one way from the outside might look different on the inside. We will carefully make a decision on changing the survey methods.”

Statistics Korea decided to completely restructure the problematic household survey. The plan is to combine the income and expense sections, which were separated starting in 2017. To this end, the Ministry of Economy and Finance allocated KRW 15.94 billion to the budget for next year’s household survey for Statistics Korea, which is about six times the amount for this year’s survey (KRW 2.85 billion). Statistics Korea will redesign the statistics next year and provide integrated statistics starting in 2020. Currently, household expenditure surveys are conducted on 12,000 households and the results are released once per year. On the other hand, household income surveys are conducted on 8,000 households and the results are released every quarter. Since the samples do not overlap, it is impossible to combine the two. This means that we cannot see how much one household earns and spends at a single glance. A Statistics Korea official explained, “Currently, the income and expenditure samples are separated. The academia and research institutions have requested integration of the two, so we decided to restructure the surveys.” Statistics Korea is also reviewing ways to increase the accuracy of the statistics, which only rely on surveys, by incorporating actual administrative data from the National Tax Service and Employment Insurance.

Actually, Statistics Korea had been preparing to implement these measures to improve the accuracy and confidence level of household surveys even before a new commissioner was appointed. In a discussion session held on August 16, newly appointed commissioner Kang already announced research results stating that an analysis of the household income statistics for the first quarter revealed that the deterioration of income redistribution would not change even with the same samples. However, Cheong Wa Dae and the government have opened themselves up to doubt. Yun Changhyeon, professor of Economy at the University of Seoul remarked, “Confidence is the very life of statistics, and the government should have consciously refrained from changing the commissioner of Statistics Korea. It will inevitably be under suspicion if Statistics Korea releases results that point to income-led growth in the future.”

Nansae BIN  is a staff writer at Seoul Economic Daily.