Every issue has its life span—even the fiercest. The issue of THAAD is no doubt one of the fiercest South Korea faces, but it also has a life span. When the interim government decided to deploy THAAD unusually quickly, in order to finish deployment before the election, we thought that a page had been turned, that the THAAD issue had run out of fuel.

Then US President Donald Trump cut in. In a Reuters interview on April 28, Trump said that the South Korean government should pay for the deployment. How much should Seoul pay? One billion dollars.

With this remark alone, Trump was able to turn the tide of the THAAD issue in Korea.

Before Trump meddled, it was easy for conservatives to attack liberals for their unreliability on national security, with THAAD a quick case in point. And it worked. Surveys have shown that over half of respondents support deployment.

But what if there’s a hidden catch—namely a one billion dollar price tag? Time for liberals to go on the offensive. Though national security was not supposed to be a topic in April 28th’s debate, the very first question addressed Trump’s remarks. 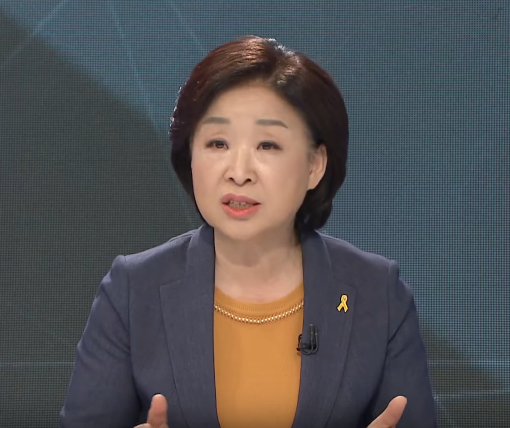 Sim Sang-jung: I have to ask this question today because people are worried about this. President Trump asked for one billion dollars for the THAAD (Terminal High-Altitude Area Defense) system. What would you do?

Moon Jae-in: The THAAD issue has now become more than a matter of security. It’s become an economic issue. One billion dollars is 1.1 trillion won. That would create an enormous financial burden. That’s why we have to get it ratified by the National Assembly. The deployment issue is also a problem that the next administration should address.

Sim Sang-jung: A new president will be elected in about 10 days. Is it the right attitude of an ally to deploy [THAAD] out of the blue in the middle of the night and send an invoice?

Moon Jae-in: I feel the same. I would like to ask whether the US government would be able to force something like this on the nation without negotiations and the approval of Congress.

Sim Sang-jung: I think a president who says “I can’t pay, so take THAAD back” would be a dignified president. If President Trump is acting in this supercilious manner, I think we need to send it back.

Moon Jae-in: I said this several times already, but the THAAD deployment issue should be handed over to the next administration to be discussed with the people and with foreign nations.

Sim Sang-jung: At this point, [THAAD] has become a matter of business rather than security. The reason [the US] acted this way is because [South Korean] political leaders were unable to stand their ground on national interests, changing their words ambiguously and walking on eggshells. I believe now is the time to express our opinion firmly. If [the US] asks us to pay them, [we] should say, “Take THAAD back”.

Moon Jae-in: In truth, many political parties and candidates have agreed unconditionally on [deploying] THAAD, which has weakened our bargaining power with the US.

Sim Sang-jung: It’s time for us to make our position clear. What do you think?

Moon Jae-in: Like I said before, [if I become president] I’ll make a decision based on sufficient discussions with the people and through the ratification process in the National Assembly.

Sim Sang-jung: From what President Trump said, it sounds as if there was a secret negotiation. I think we need to conduct a thorough investigation on issues such as the timing of the THAAD deployment, when it was actually deployed, and the costs involved.

Hong Joon-pyo: In order to bring companies back and have the companies invest internal reserves instead of [attracting] foreign investment, we have to prevent the evils of hard-line, aristocratic[1] labor unions. These people, who make up less than 3.2% of workers, engage in political struggles, go on strikes at the slightest provocation, demand wage negotiation every year and drag it out for the whole year. We need to fix this kind of labor system. Second, the key to addressing the regular and non-regular worker problem is labor flexibility. Since it’s so difficult to terminate a worker, [companies] don’t hire regular workers. It’s resulting in this strange phenomenon of having more non-regular workers than regular workers. The Park Geun-hye administration tried to revise this labor policy but failed because the National Assembly, which is dominated by the opposition party, blocked it. If I come to power, I will fix the evils of the vicious economic cycle, hard-line aristocratic labor unions, and labor flexibility to energize companies, and I will remove regulations on corporations so that companies can perk up and make investments, and I promise to actively implement pro-corporate policies so we can make a lot of jobs for young people.

Moon Jae-in: You put the blame on hard-line, aristocratic labor unions, but Samsung doesn’t have a union.

Moon Jae-in: Did Samsung go overseas because of a hard-line, aristocratic labor union?

Hong Joon-pyo: Samsung doesn’t have an aristocratic union, and that’s why it became the top company in the world.

Moon Jae-in: They went overseas. Is it because of a hard-line labor union?

Hong Joon-pyo: No. But Samsung became the top company in the world because they don’t have an aristocratic labor union. As for their overseas production, they’re going overseas because they have benefits as a global corporation. If it’s more beneficial for them to do business in Korea, then they will return to Korea.

Hong Joon-pyo: The reason the marine transport labor unions and shipbuilding industry got into difficulties is because of the global shipbuilding economy. And secondly, even when we receive an order to build offshore plants, Korea only has about 20% of the related technology. So the [difficult condition in these industries] is because they took orders at low prices and suffered losses, and ended up committing accounting fraud. I never said that Daewoo Shipbuilding and Marine Engineering became that way because of a hard-line, aristocratic labor union.

Moon Jae-in: So then why do you put all the blame for the economic crisis on hard-line labor unions?

Hong Joon-pyo: Car [companies] don’t make domestic investments because of labor unions. When I was the governor of Gyeongsangnam-do, I told them I’ll give them one million pyeong (about 817 acres) of land in Galsaman, Hadong, if they come back, but they say they’re not going to invest in Korea. And they invested in 500,000 pyeong in China. They said it was because of labor unions.

Moon Jae-in: Do you think we have to reform chaebols?

Hong Joon-pyo: We must. We have to break the bad habits of chaebols, and their habit of power-tripping over subcontractors.

Hong Joon-pyo: They’re both important, but I believe the main problem in the economic crisis is hard-line labor unions. Aren’t you engaging in political activities backed by aristocratic labor unions, the labor unions that only account for 3% [of all labor unions]?

Sim Sang-jung: How are you going to engage in FTA negotiations?

Ahn Cheol-soo: We need to prepare for it right away. We have to a prepare sufficient amount of persuasive reasoning. International trade in the next administration should be managed by minister-level leadership. Under thorough direction, [the FTA] must be settled quickly through careful under-the-table negotiations by the Korea-US summit talks. This is an opportunity for Korea to change the areas that we’d been worried and concerned about in the past.

Sim Sang-jung: What are the main areas that you will change?

Ahn Cheol-soo: There are many different ones. There’s the issue of intellectual property rights, and there are the “toxic provisions”, parts that the opposition party argued were problematic.

Sim Sang-jung: The reason [my party] was against the FTA is because the sovereign power of our government, which protects the lives of our people, must not be undermined. This is the key. Small and medium sized enterprises (SMEs) are urgently requesting the government to designate types of businesses suitable for SMEs. The government refused because of the FTA. There’s the issue of fine dust particles, which you’re interested in, Mr. Ahn. Low-carbon cars are the answer to reducing fine dust particles. We have to lead people to use low carbon cars, but the tax system reform in the automobile industry is not happening because of the FTA. The government has been postponing it. That’s why we opposed the FTA. Trade balance is important, of course, but our sovereign power over policy has been damaged. In your promises, there’s no mention of designating types of businesses suitable for SMEs or agricultural support policies. Is it because you were thinking of the FTA?

Ahn Cheol-soo: I’m more interested in agricultural support policies than anyone else.

Sim Sang-jung: How come you don’t have policies for SMEs?

Ahn Cheol-soo: I believe it’s best to handle that problem with different means.

Sim Sang-jung: Isn’t it because you’re conscious of the FTA?

Ahn Cheol-soo: Never. Not at all.

Sim Sang-jung: If I become president, I will improve the toxic provisions and the imbalance in the agricultural area. Is that what you’d do?

Ahn Cheol-soo: There are differences in the detail, but overall, I will take it as an opportunity to address the provisions that were considered problematic from our side.

The Dissolve is publishing extracts from all six presidential debates.

The Korean transcript for this fifth debate is at Yeonhap News.